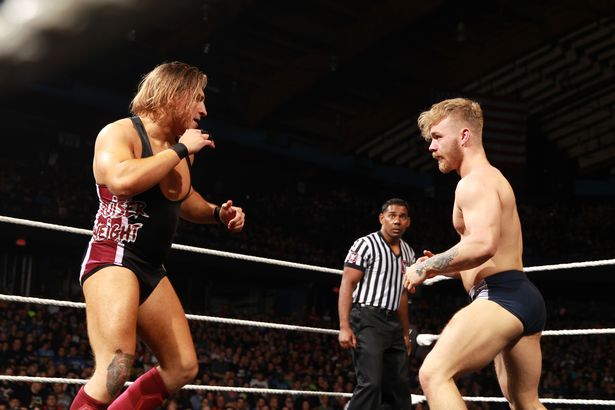 It’s pretty unbelievable. When I took over this project I had no idea how much great wrestling there would be to consume. As historic as January 2017 was, it feels like every subsequent month produces more great wrestling than the last.

May was no exception, as we had the highest number of nominated matches this year. Let’s dive in.

Man, I love Joe Doering. I’d have to agree with VOW co-host Joe Lanza that his comeback to wrestling is one of the more underreported stories of the year. Not only did he survive cancer but he’s come back wrestling as well as he was when he left. Playing the role of western hoss as men like Stan Hansen have before him, he carries himself with a similar charisma. Beyond having a very good Champion Carnival overall, Doerring delivered in spades in this final match.

Ishikawa, for his part, was great as usual. His offense is some of the more devastating stuff in the game right now, between his stiff strikes and the brutal fire thunder driver. Despite Doering’s size he played an excellent babyface in peril in this match and his hope spots and comebacks were on point. The man throws a hell of a lariat, too.

Now’s a good time to get into AJPW.

When the blocks were announced for NJPW’s Best of the Super Juniors, everyone lost their mind over Block A, and rightfully so. But I knew Block B would also put out their fair share of excellence, for it had my personal MVP of the tournament: KUSHIDA.

Similar to Okada with the heavyweights, it’s not fashionable to gush over KUSHIDA’s brilliance in the ring since he’d been pushed as the junior ace all of last year; even Japanese audiences wanted to see him dethroned by fresh blood in BUSHI by the end of last year. I’m the complete opposite, I actually think in some ways KUSHIDA remains underrated. I was the high man on their matches last year, and I thought this match was another great chapter in their rivalry.

It’s interesting because this match didn’t feature the high spots or as much action as similarly highly regarded matches from this tournament but these two men got so much out of what they did. Their exchange of blows didn’t feel like taking turns, they felt like men out to hurt each other. It felt like a struggle. And at this point in the tournament each man was searching for their first victory. KUSHIDA debuted his new finish, Back To The Future, here to further evolve his character and begin his redemption arc.

It was a close run between this and KUSHIDA’s match with Taguchi in making the top 10, but I feel this match edges that one out in terms of emotional and historical weight.

Who has better natural chemistry than these guys? This match, especially the first half, felt very different than many of their previous encounters. These men fought each other like they had been here before. The more deliberate pace in the early going contrasted well when they inevitably went nuts on each other later. Dragon Lee had Hiromu’s number on this night, even utilizing his own moves against him.

But it was Lee’s own move, the Phoenix Plex, which eventually put Hiromu away, giving Hiromu his first singles loss of the year. It felt like a star-making win for Lee as he finally vanquished this man on Japanese soil. And added a ton of intrigue to the rest of the tournament.

EVOLVE had a low key great month. This was the main event of the second show, and therefore of their weekend, and it did not disappoint. Building upon their first match, which was good but clearly left things on the table, these two men emptied their arsenals on each other. Rush tried everything he could to overcome Sabre, but Sabre’s technical prowess kept him in firm control throughout.

Sabre’s style serves his status as a champion very well. He always wrestles his matches like he is the best wrestler in the match, which is how a true champion should come across. With a rare size advantage in this match, as well, Sabre was able to twist and bend Rush in ways he would struggle with more so on the larger men in the promotion. At one point he choked Lio out with a one arm sleeper that was a stunning visual for me.

Rush’s comebacks and hope spots were thrilling and made sense. His selling in the match was great; this was great stuff all around.

This was as physical and hard hitting as you would expect. Kyle O’Reilly went into this match undefeated in EVOLVE and this was a perfect example of using a commodity while you have them. Kyle O’Reilly is basically a more refined version of what Matt Riddle is, without the charisma.

The striking was elite, the submission transitions were deft, and there was some strong style no selling and exchanges thrown in for good measure. O’Reilly was the glue of the match and Riddle was the heart of it.

This was the best match of young Jay White’s career. What’s amazing about this match to me is it only went 13 minutes. This was like a G1 Climax gem of a match. Ospreay seemed to be working a little more reserved style in this match, actually. His offense and bumping are some of the best in the game.

Jay White stepped up to his level of competition here. He showed excellent fire, had some great bursts of offense as well as matched Ospreay step for step. On this very good ROH show this was the standout match by far. It makes me want to see these two tear it up again, perhaps on an even larger stage.

This was the spotfest of the month. Aside from some shakiness in the early goings of this match, this came together like a beautiful car wreck. The sequences of dives, apron spots, double team moves…this match had it all. Everyone was super over because it’s PWG. Everyone got to shine. Too many high spots to count. We got a Shooting Star Meltzer Driver and that wasn’t even the finish.

Penta and Fenix got revenge on the Bucks for BOLA last year, super kicking them both into oblivion. After Ricochet did some more insane things the Lucha Bros. isolated him and scored the upset win to claim the title. There were points in this match where Ricochet looked like the best wrestler in the world. His sequences were absolutely nuts.

I don’t know what else to say, just go watch this.

While not receiving quite the attention of its prequel at last year’s Best of the Super Juniors, I felt this match surpassed it in pretty much every way. Ospreay in particular has matured even more as a performer, which is crazy when you think that he’s only 24 and has been wrestling for five years. These two men did everything they could to one another, including each other’s moves. At one point Ricochet gave Ospreay what had to be the best German suplex of the year.

One of my favorite moments in the match is early on after a series of headlock takeover, into headscissors, into escapes; a man in the crowd tried to start a “This is awesome” chant, but stopped when he realized it was too soon. The beauty of Korakuen fans.

Once the flips started coming, the flips weren’t stopping. These guys athletically pushed themselves to their limits and delivered a classic Junior style match that I’m sure will make people’s lists at the end of the year.

This was so close to being #1 for me. This is one of those matches that’s so good that people will get mad at you for not giving it five snowflakes. Regardless of that, it’s my favorite WWE match of the year, edging out the Styles/Cena classic at the Rumble.

How blessed are we as fans? These guys are both under 25. If you know where to look the future of wrestling couldn’t look brighter. Two UK boys under 25 put on a match that was Wrestlemania main event worthy, a match that will go down as one of the best WWE put out this decade. Absolutely phenomenal.

I absolutely loved this match.

I thought their NJ Cup match was a classic and the best Cup match I’d ever seen, but this was a step above it. The beginning of this reminded me of the classic Ishii/Okada match from last year’s G1, with Ishii blitzing his main event caliber opponent and almost getting the early victory.

This was a kind of play-in match for Omega as he needed to get his win back in order to rightfully challenge Okada again for the throne. I had hoped when Ishii won their first encounter we’d get a rematch and not only did we get one, but as Omega has claimed he likes to do in rematches, this was completely different than their first match. Watching Omega bump for Ishii’s lariats is one of the more joyous things to behold in wrestling this year. This was more of a strong style encounter than their first match, which would seem to favor Ishii. But Omega persevered. He even utilized Ishii’s own Brainbuster against him.

Truly, we as wrestling fans have been blessed this year with the level of high quality stuff that we’ve gotten. As of this writing the 5 star Ospreay/KUSHIDA affair has taken place and I patiently wait for what Dominion brings us. While Meltzer didn’t give this match 5 stars, so it may not be historically looked upon as an “official” five star match, the very fact that I’ve had a five star match every month for the first half of the year goes to show that pro wrestling in 2017 is truly great, if you can let yourself enjoy it.