It’s remarkable how they basically transported the Impact Zone to India. The only clear discernible difference being the fact that the crowd is Indian. This as well as the following three weeks leading up to Slammiversary were all taped in India.

Lashley and El Patron had a confrontation to open the show before being told to defend their respective titles by Bruce Prichard. Lashley thinking everybody else is a geek is still my favourite pro wrestling character.

There was absolutely no reason for this to be a title match, other than to devalue the idea of a title match. The match would have been no different had it not been non-title. Low Ki bust his eye open after colliding with the top rope. They seemed to be on different pages early but brought things together to deliver a fun little match in the end. Low Ki picked up the win with a double stomp as Konley was draped in the ropes. Watching this match was fascinating because this crowd was clearly unfamiliar with the general beats of a pro wrestling match so it was remarkable to see them give Konley a standing ovation after a pretty basic flurry of moves. **1/4

After the match Sonjay Dutt challenged Low Ki to an X-Division title match next week. The visual of Low Ki with a bloody eye going face to face with Dutt, who’s eye he injured two months ago added a really neat layer of nuance to this. Dutt and Low Ki’s match has a tonne of subtext involved – Dutt returning to India, him having never won the X-Division title plus his injury inflicted at the hands of Low Ki. As usual it feels like they could get more out of this match between announcement and execution but alas, such is the way of Impact.

Kumar whiffed on a dive and a moonsault before Richards submitted him with an Ankle Lock. Afterwards EC3 whipped Kumar until Storm made the save. *

These two had a really fun sprint last October but this was unnecessarily long. This crowd responded to certain high spots and direct engagement – so any part of this match that was just these two throwing bombs was good fun and the rest was just there. It certainly feels like these two have better in them. Like the X-title match this would’ve served the same purpose non-title. ***

Quick pointless title match. Sienna and Laurel attacked after the bell before Allie tried (and failed) to make the save. *

I was talking a couple weeks ago about the potential of Impact’s heavyweight division, that there are a bunch of guys who can potentially deliver enjoyable main event matches. This match was the flip side of the equation. A slow, plodding match with little in the way of interesting ideas and serving nearly entirely to showcase El Patron. There was little in the way of energy, the crowd was remarkably quiet and the match came and went without note. Drake and Adonis beat down Patron after the match before Moose made the save. **1/4

It was somewhat fascinating to watch a crowd of people with no real culture of pro wrestling respond to US wrestling. They seemed to have no preconceived notions of what wrestling is supposed to be so they’d go nuts for basic interactions but seem relatively indifferent to more intricate sequences. They clearly had vastly different expectations relative to western audiences and I’m interested to see whether people adapt how they work to the very different audience – or to see if the crowds “learn” how to react as their expectations are honed.

This episode of Impact Wrestling hinged on Lashley/Moose and El Patron/Adonis delivering and when they largely didn’t the show fell a little flat. 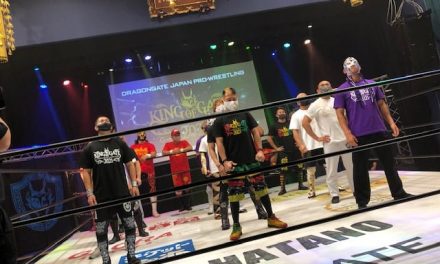