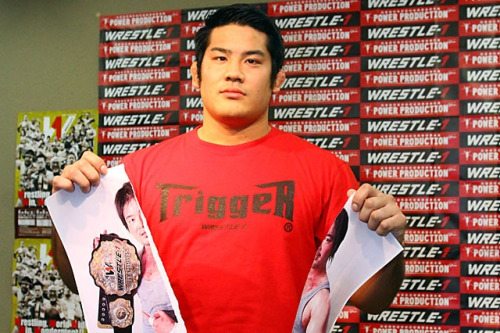 Well, let’s see… the fondest memory I have of WRESTLE-1 is Jun Akiyama’s phenomenal match with Katsuyori Shibata from August 4, 2004. Different WRESTLE-1, I know, but the Keiji Mutoh-owned WRESTLE-1 is not a promotion I remember fondly. Or think of… at all, really. I guess if we’re talking word association, clusterfuck comes to mind. J-TNA, or Great Muta’s Shiny Wizarding World — a less-than-magical place where young potentials were nothing more than enhancement talent for out-of-work All Japan guys and the top championship was little more than a game of “hot potato” as the company scrambled to find a guy that wasn’t Mutoh himself.

Remember KAI? He was pushed as “the guy” with the redemption storyline, defeated Final Boss Mutoh to win the WRESTLE-1 Championship, and then lost it on his first defense in less than 7:00 to Hideki Suzuki. But boy, did KAI get his revenge – he beat Suzuki to regain the title and then…lost it on his first defense to Manabu Soya. Then came Daiki Inaba, WRESTLE-1’s first real attempt at playing a homegrown ace card. He defeated KAI to capture the W-1 Title and successfully defended it against KAI just to be sure his victory wasn’t a fluke. Alas, Inaba dropped the belt to the promotion’s very first champion in Masayuki Kono and it was back to business as usual.

In my world where WRESTLE-1 didn’t exist, little Twitter birds kept tweeting about a potential savior, the promotion’s next great hope. With Kaz Hayashi now driving Daddy Mutoh’s silver 2002 Mazda Miata, WRESTLE-1 was finally embracing its youth and in doing so, had crowned its new fresh-faced hometown hero in Shotaro Ashino.

The 27-year old Ashino is like the bizarre lovechild of Hideki Suzuki and a pre-“Pimpin’ Ain’t Easy” Yujiro. He was trained by Mutoh, studied a bunch of Team Angle tapes for a couple years, and then came suplexes a-blazin’ into 2017 WRESTLE-1. In fact, he calls himself the “Master of the Suplex” and between the WWE backdrop-style Germans, he’s catching everyone in a maelstrom of ankle locks. On paper, he’s your favorite wrestler. I mean, he’s like Hideki Suzuki, Kurt Angle, and Takashi Sugiura all rolled into one…only without Suzuki’s grappling savvy, Angle’s charisma, and Sugiura’s badassery. Yet, with a little over two years of experience, Ashino is WRESTLE-1’s most promising champion to date and he’s progressing at a rather rapid pace. He’s trying really hard to be “the guy” and perhaps he could be WRESTLE-1’s answer to their ace dilemma. Or he could just be another guy.

Back in January, Ashino pulled off a big submission win over fan-favorite Jiro “Ikemen” Kuroshiro at Korakuen Hall. Kuroshiro is one of the more awkwardly capable wrestlers out there but he manages to make it work without so much as taking off one of his many themed jackets (galaxies, watermelons, cats, etc.). The match itself established Ashino as another suplexer who likes to slap on ankle locks but it took him four or five tries before Kuroshiro eventually gave up.

Now, when you choose the moniker “Master of the Suplex”, one would assume that you have mastered the art of the delivering the suplex but…well, whatever.

Suplexes? Check. European uppercuts? Check. Ankle lock finisher? Checkmate. Ashino took his specialized skill set into the biggest battle of his short career: challenging Masayuki Kono for the W-1 Title on March 20th. Say what you will about Masayuki Kono but at this stage of his career, you aren’t liable to pull a 4.5 snowflakes out of him. Against Ashino, he’s the Yoshihiro Takayama-type, an imposing lurch largely limited in what he can do…besides lots of knees. Ashino smartly tries to neutralize Kono by targeting the leg but Kono blows if off and in turn, blows through his rather small arsenal of offense. Ashino’s babyface selling toward the end is exactly what you want from the kid you’re about to strap the rocket to, which is a big part of what made Hideyoshi Kamitani’s BJW Strong Title win over Yuji Okabayashi last year so damn compelling. The way Ashino exhaustedly hacks away at Kono’s knee, trying to chop him down to his level, only for Kono to plant him with the chokebomb for a nearfall. The finish re-established the severity of the ankle lock, with Ashino grapevining the hold to ultimately submit Kono in dominant fashion. The match itself wasn’t anything magical but Ashino’s moment was and it imbued the new champion with self-confidence.

In April, Ashino defended the title against Shuji Kondo, who still looks/wrestles like 2004 Shuji Kondo, and in this match, Ashino was a little more evenly-matched. What he lacked, however, was fire and temperament. He went through the motions of working over Kondo’s leg to set up the ankle lock, with Kondo targeting Ashino’s neck to…I guess set up his half dozen lariats? Midway through, the match devolves into your routine back-and-forth bomb throwing contest, with suplexes and lariats galore. Ashino tries for the ankle lock but Kondo’s able to German suplex his way out of it. When Ashino’s finally able to latch on, Kondo’s selling reaches its zenith as he struggles for a way out, with Ashino again grapevining the ankle lock for the submission. A perfectly fine match that establishes Shotaro Ashino as “the man to beat” but I’m still not sold on him being “the man” just yet.

Manabu Soya, your ole-fashioned clobbering bruiser, challenged Ashino for the title last month and the result was Ashino’s strongest performance to date. The fire was there, the confidence, the aggression — Ashino looked more like the dominant Sugiura-type suplexer he’s trying so hard to emulate and began looking like a potential “ace”. Soya’s ankle took quite the beating (some of it self-induced), with Ashino stomping, stretching and European uppercutting it for a good portion of the match. But Soya’s power is his saving grace as he’s able to stagger his way back to a fighting stance. Ashino struggles to complete his rolling trio of Germans but he can’t pin Soya down with the bridging hold, allowing Soya to take over on the offensive. Soya empties the big guns in an effort to beat the champ, dropping bombs and belting him one beefy lariat after another. Ashino tries to stand valiant against Soya but collapses. When Soya goes for the kill, Ashino pops in an “Ace” vitamin supplement, nullifying all of Soya’s previous offense, and slaps on the ankle hold out of nowhere, submitting him to retain the title.

On June 6, Ashino will defend the title against another young hopeful in Koji Doi, but whether or not the company continues to place their chips on Ashino remains to be seen. Is Ashino the end to WRESTLE-1’s woes?

Perhaps, perhaps not, but if anything, he represents the fighting champion, hungry for new challenges and continuing to develop in and out of the ring at an impressive rate. If he’s not the guy already, he’s the guy right now and exactly the guy WRESTLE-1 needs to be taken seriously in the ever-evolving pro-wrestling industry. 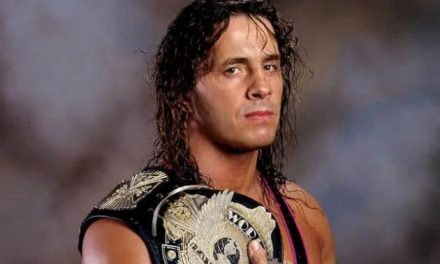 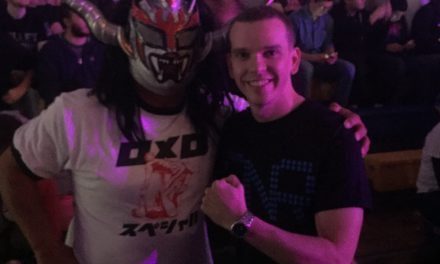 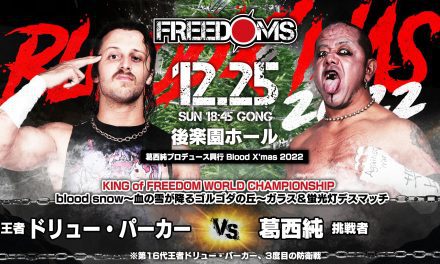