While he has not peaked as highly as a guy like Ricochet or a guy like Ospreay, night in and night out, El Desperado has been the highlight of this tournament. You knew what you were getting into with Ricochet and Ospreay, you knew what you were getting into with Liger with this being his last tournament, and those guys have been excellent, but with Desperado you were unsure what exactly you were getting, and as a result he has been the most fun to watch. ACH worked this match like he had Desperado scouted and already knew how to play his game, leaving Desperado scrambled and unsure what to do. He hit him with a set of low-blows early on and then spent the match avoiding his shenanigans, eventually winning with a Midnight Driver. Another enjoyable bout to add to both of their resumes. With this victory, ACH joins Desperado, Kanemaru and (spoiler) Taguchi at the top of the block. ***1/4

You would expect these guys to take it easy and maybe not go all out considering it’s a house show, but that was not the case here. Both men busted their ass and did what they could to have a great match. BUSHI has had an excellent tournament between his matches with ACH, Desperado, KUSHIDA and now Volador, who’s also had a decent tournament, though maybe not great. BUSHI won in about 10 minutes with an MX as he scores his second victory. Despite a strange lack of selling by Volador, which does not bother me but I could see bothering others, this was good performance by the two. ***1/2

Again, while maybe not great, both Taguchi and Tiger Mask have had decent tournaments. Taguchi has been a bit more comedic than anything up to this point but has still been fun to watch on some level, his match with Desperado being one of my favorites so far. He has KUSHIDA in the main event of Korakuen on the 29th, so expect that to deliver. As for this match, it was a bit goofy at times but both worked hard enough and it was about what you would expect out of Ryusuke Taguchi vs. Tiger Mask IV. It was solid. ***

Matches like these remind me that I was right in thinking Kanemaru can still go when put in the right position. As someone who thought he would have a lot of good matches and would step his game up in this tournament, I would be lying to you if I told you he has met those expectations, because outside of this and the ACH match, he has not been very good and has easily been the worst guy in his block. However, when he wants to try, like he did here, he can be very good. KUSHIDA was also tremendous and put on not only one of his best babyface performances of the year, but one of the best babyface performances of the year in all of pro wrestling. He was so good defending himself against Kanemaru and against Suzuki-gun to the point where all the bullshit and all the interference was actually enjoyable and actually made sense for once. He fought like hell to overcome it, knowing that he would be out of contention had he lost the match. As always, Gedo tricked us into thinking that a guy who had potential to win the block was not going to be in the mix by having them lose all of their matches early on, and in KUSHIDA’s case, he’s been on a losing streak as it is so a loss here would have made sense to the overall story. His comeback has begun and there’s a good chance he does end up winning the block now. Watch this match. ****

Nothing blow-away outside of the main event but this was another set of nice, short, easily consumable block matches. All nine shows have had at least one ****+ match in my book and we still have a decent amount of big matches to come, so it’s safe to say this year’s Best of the Super Juniors is a success. 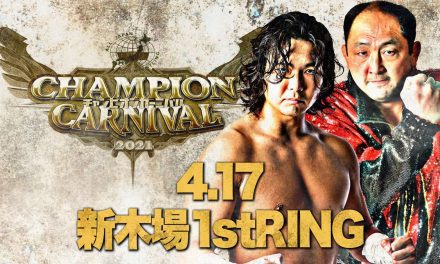