Similar to the show that took place in Toronto on Sunday, this event will be released as a VOD on ROH’s website sometime in the near future. I would like to think that ROH will get this show up quickly, but as I mentioned in my Toronto preview, their track record isn’t exactly stellar.

Taven earned this opportunity after winning a Battle Royal back at Manhattan Mayhem VI in March. It seems pretty obvious that Daniels will retain here, as it wouldn’t make much sense for him to lose the title to Matt Taven (of all people) a few days prior to a big PPV. That being said, it should still be an interesting match. I’m sure they’ll figure out some way to make it really dramatic for the live crowd, to make them believe that Taven actually has a chance.

Plus, you do have to story of a potential history-making moment, as if Matt Taven wins, he’ll be ROH’s first-ever Grand Slam Champion (he’s already held the ROH World TV Title, ROH World Tag Team Titles, and the ROH Six-Man Tag Team Titles). It’ll be intriguing to see if this actually ends up being the main event, or if something else goes on last. Either way, I’m sure this’ll still be a pretty good title bout. Daniels should retain here, though as crazy as this sounds, I wouldn’t put Matt Taven’s chances of winning at zero percent. Prediction: Christopher Daniels

So there’s no way that this won’t be a ton of fun. This match doesn’t have much of a back story, other than it’s The Bullet Club & CHAOS going up against each other in an eight-man tag. Looking at the rest of this card, I feel that this could easily be the best match on the entire show, if everyone has their working shoes on. There should be plenty of action, and with the likes of Will Ospreay, Roppongi Vice, & The Young Bucks involved, I’m sure there will be bodies flying all over the place. As for the result, Adam Page seems like the odd man out here, so I would think that he takes the pin. Prediction: CHAOS

Naito’s title isn’t on the line here, but there is a bit of a backstory here. On Night 1 of Honor Rising back in February, Martinez teamed with LIJ in a six-man tag, but he didn’t exactly get along with Naito. After their side was victorious, Naito wanted Martinez to do the LIJ raised fists salute, but he refused, and Naito responded by flipping him off. It’s not a lot, but at least there’s something. While it might not be appealing at first, I feel that it has the chance to be really good. For Martinez, this is probably the biggest match of his entire career, so I’m sure he’s going to work really hard here. As for Naito, this is actually the only singles match he has on this entire tour, so I doubt that he’ll be taking a night off here. I wouldn’t shock me if this underperformed, but again, I think both guys will be motivated, and we should see a really good encounter. The outcome isn’t really in question, but can Martinez top the match he had with Goto in Korakuen Hall? We’ll see. Prediction: Tetsuya Naito

As soon as LIJ was announced for this tour, I figured that we’d definitely be getting this match at some point during the tour. I don’t see this as having nearly as much potential as the eight-man tag, but this should still be pretty good. The Briscoes are always a joy to watch, while BUSHI, EVIL, & SANADA have proven to be a very entertaining trio since they first won the NEVER Openweight Six-Man Tag Team Titles back at Wrestle Kingdom XI. I know Bully Ray is involved, but these kind of matches do a solid job of hiding his weakness, so I don’t think he’ll be much of an issue. Now that LIJ are holding the NEVER Openweight Six-Man Tag Team Titles again, I wonder what the chances are of this becoming a double title match. If I was a betting man (which I’m not), I would put my money on that not happening, but it would be cool if it did. Anyway, I imagine that The Briscoes & Bully Ray retain here, in what should be an entertaining undercard title bout. Prediction: The Briscoes & Bully Ray

War Machine’s titles aren’t on the line here, as their match with The Guerrillas of Destiny at Dominion is already set. I’m not expecting this to be spectacular, but I can see this being a very strong tag team encounter. Hanson & Ray Rowe have done a great job in their short time in New Japan, and they should have some really good exchanges here with Tanahashi & Lethal. With that being said, this might be the hardest outcome to predict on the entire card. You would think that War Machine aren’t losing, since they’re the IWGP Heavyweight Tag Team Champions, but Lethal shouldn’t be losing (because he’s challenging for the ROH World Title at the PPV on Friday in NYC), and there’s no way Tanahashi is eating a pin. However, given that KUSHIDA scored a surprising victory over Jay Lethal in Toronto on Sunday, I guess Lethal could end up being the one who gets pinned here. It would be incredibly strange to see one of the guys challenging for the ROH World Title lose two matches in four days, but at this point, it’s appears to be the most likely scenario in this one. Prediction: War Machine

This is actually a rematch from Best In The World last June, when Castle challenged Fish for the ROH World TV Title. I really enjoyed that match, and I wouldn’t be shocked if these two have another really good encounter here. There’s no title on the line this time around, but it should still be a very entertaining undercard singles match. I would expect Castle to get the win here, since it doesn’t seem like Fish will be sticking around much longer. Honestly, there’s not much else to say about this match, other than that, as it really has no story behind it. This is just a match that’s happening on the card. Prediction: Dalton Castle

Here we have a match that’s a continuation of what happened in Toronto, except this time around, Jay White & Shane Taylor are being added to the mix, making it a six-man tag. This won’t be the best multi-person tag on this card, but it should still be fun. Alex Shelley, Chris Sabin, & Jay White work very well together in these trios encounters, and while this particular incarnation of The Rebellion isn’t their most exciting lineup, Search & Destroy will probably get a fine undercard match out of them. Since Caprice Coleman & Rhett Titus beat The Motor City Machine Guns in Toronto, I would think that Seach & Destroy pick up the victory here over The Rebellion. Prediction: Search & Destroy

To be completely honest, I’m not excited for this one. These two met in a singles match in New York City during last year’s War of the Worlds Tour (a show which I saw live), and while it was technically “good”, it was subpar by KUSHIDA standards. I’m not sure if these two simply don’t have great chemistry, or if Silas Young is someone who just doesn’t work well with New Japan juniors (he had a pretty average match with Jushin Thunder Liger at Final Battle last year). This should be a solid match, but personally, I’m not expecting much. They could end up putting on a much better contest this time around, but I won’t believe it until I see. As far as the result goes, I expect KUSHIDA to get the win here. Prediction: KUSHIDA

If there’s anything to be disappointed about on this particular card, it’s the usage of Marty Scurll. It sucks that he’s not in a match with some of the bigger New Japan talents, but I suspect that Scurll being part of the Best of the Super Juniors Tournament in a few weeks has something to do with it. Anyway, the way this match works is that if Scurll gets pinned or submits, then whoever scored that pinfall or submission will receive an instant shot at the ROH World TV Title. When you consider who else is in this match, it’s pretty easy to see that the chances of one of them actually beating Scurll to earn the title shot are very unlikely. The only person in here that has any real shot of beating Scurll might be Kazarian (and that’s probably the least exciting option out of the bunch, if I’m being honest), and even if he does manage to beat Scurll, he’ll surely lose that subsequent title match that would occur immediately afterwards. The best outcome here is that Scurll just wins outright, but even with the lackluster field of potential challengers, this could still be a fun little Six-Man Mayhem. Prediction: “The Villain” Marty Scurll 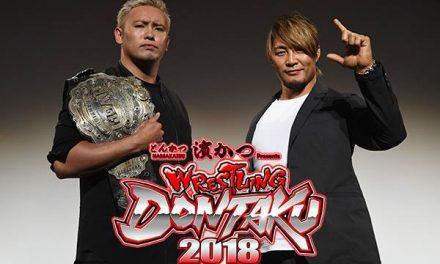