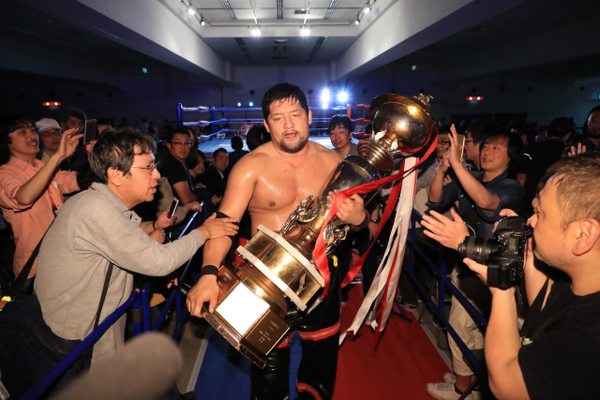 What was interesting about this match is that it was worked like a big brother vs. little brother match with Aoyagi serving as the big brother testing his sibling despite being three years younger. Okada has improved over the past four months and always shows a great deal of heart in these matches. He doesn’t stay down, he’s willing to take a beating and give it right back, and Aoyagi is the perfect guy for him to be working with, as Aoyagi himself has improved a ton over the past year or so. He’s become a nice midcard babyface hand who always makes his opponents look good and the fans can’t help but get behind because of how likable he is. Aoyagi hit a beautiful looking Fisherman suplex for the win in what was a fun, hard-fought battle between two of All Japan’s young stars. **3/4

Koji Niizuma wrestles for the Fukuoka-based Pro Wrestling KAGEKI so worked this show as a local attraction of sorts. Aoki tapped him out with a Texas Clover Hold in only a couple of minutes. Not much more to say about it. It was just a match. **

Another KAGEKI showcase match that was just kinda there and was not notable in any way possible, although seeing Iwamoto and Ultimo Dragon in there together was quite enjoyable. KING reminded me a little bit of Player Uno of the Super Smash Brothers. Same shitty body, similar gear, similarly unimpressive. Nakajima’s also a guy I’m rarely impressed with these days, so all in all I’d have to recommend skipping this. Not bad, just a match. **

Hashimoto is a much better tag team wrestler than he is a singles wrestler as I’ve learned since he and K-Hash split, where as K-Hash has done an excellent job on his own. He always leaves me wanting more in his matches because in my mind he has potential to do more, though maybe we’ve gotten to the point with him where he really doesn’t. What he is may just be what what he is and I have to accept it. His look also bothers me, which it probably wouldn’t if he was better in the ring. I can overlook a shitty appearance if you’re good in the ring and I can overlook average ring work if you have a good appearance, but when you’re both average in the ring and have a poor look, then I have a problem with you. With that being said, now that I’ve buried the guy, I like him and Akiyama as a tag team and I like him more in short bursts.

On the other hand, this tournament was really Suwama’s return to prominence as a singles guy, because man did he ever step up and deliver big. He had what was probably my favorite match of the entire Carnival with Shuji Ishikawa on opening day and then nearly topped that one with Kengo Mashimo on the 22nd. It took him some time, his return in the summer started out rough, but he’s slowly worked his way back up and has slowly become the Suwama we once knew again. I’m looking forward to seeing what he does for the rest of the year, where as I couldn’t possibly care less about him a few months ago. Good, concise little tag match here as Akiyama and Sato also held up their ends. ***1/4

Jake Lee might have been the standout of the Champion Carnival with all things considered. Every night he busted his ass and delivered a great performance, even if not all of his matches were classics. He’s developed into a pretty damn great worker in his short career and has an extremely bright future if he continues on the right path. He doesn’t have the charisma a guy like Miyahara has but he’s constantly improving and he has plenty of room to grow. He got the win over Bodyguard here with a backdrop and challenged him and Zeus for their tag titles with Nomura, which he’ll get on May 12th. Omori was the outlier in this one as he was by far the worst guy in the tournament night in and night out and I’m hoping this was his last year. He simply can’t perform at a high level anymore at nearly 50 years old. Jun Akiyama is the same age as him and can still go, yet he pulled himself out of the tournament because of his age. It’s time for Omori to do the same. Regardless, this was another fun little tag match. ***1/4

For the past few months I’ve been sold on Joe Doering being the one to take the title from Kento Miyahara, and while I still do think that’d be a good way to go, I realized during this match that Zeus is where the money is at. His interactions with Miyahara were molten hot, their chemistry is undeniable, and I’ve changed my stance on Zeus being the guy to beat Miyahara. He’s their man. Once Miyahara beats Ishikawa (spoiler!) on the 21st, I’d start building towards him vs. Zeus for Sumo Hall in August.

KAI, like Suwama, really stepped up big time in the Carnival and had a number of very good matches with a number of people, from Zeus to Jake Lee to Miyahara. I worried about him coming back to All Japan because I hated him towards the end of his run in WRESTLE-1, but he’s made a ton of changes to both his personality and his style, and I’ve enjoyed watching him quite a bit because of it. He’s no longer an annoying geek who tries too hard to stand out, he’s simply KAI, the dude who gets in there and wrestles, and I appreciate that. He’s another guy I’m looking forward to following for the rest of the year. Looks like he’ll be teaming with Mashimo moving forward as he brought up the idea to him backstage.

It’s hard to have a bad match with the names involved, so as you would expect, this was very good. All Japan has been doing these super long trios matches lately, most notably the near 40 minute match at the end of March, and while they take a little bit to get going, once they get there they’re highly enjoyable. ****

Doering was my original prediction for the tournament and was the guy I thought would dethrone Miyahara, but it seems like All Japan isn’t ready to push him that hard quite yet.

Whether or not they’re right in that regard, Ishikawa is not a bad choice and is not someone I’d ever complain about having to watch in a big title match. Although there’s no evidence that shows Doering isn’t ready for that monster push, I’d like to see how the Zeus thing goes, and as mentioned he’s probably the smarter guy to go with at the end of the day.

Doering’s return to pro wrestling this year has been absolutely incredible. Not only is he alive and healthy, he’s also better than he’s ever been. He stepped away for a year and a half and bettered himself as a wrestler while he was battling brain cancer. He’s lucky to be alive, let alone wrestling. It goes to show how much heart he has and how much he loves what he does. He was outstanding in this match selling for Ishikawa, and he looked better in defeat than he would have had he won. Ishikawa on the other hand looked like a complete world beater in every way possible as he always does, once again proving that he’s one of the best wrestlers in the world.

I loved the sense of urgency and eagerness the two brought to the table in the sense that both looked like they just wanted to get in there and get through their opponent as easily as they could, and because they had the same thing in mind, both had to give everything they had, with Ishikawa eventually getting the better of Doering. Doering, despite being in serious pain, fought as hard as he could to show that he can hang with a guy like Ishikawa who he’s never encountered before, and though he did fail to do what he set out to do, he did manage to hang in there and look good in doing so. ****1/4

Ishikawa gets his shot at Miyahara on May 21st in Korakuen, where I’m sure he’ll put in yet another great performance even if he doesn’t win, which he’s obviously not.

While not exactly All Japan’s best show this year, the top two matches were so good and the rest was decent enough to where I have to consider it a good show. My only complaint would be that it felt more like a house show than anything and because of that the main event didn’t feel as big as it could have in another building, but then again I’m not sure where else they’d be able to do it. Check out the last two matches for sure. 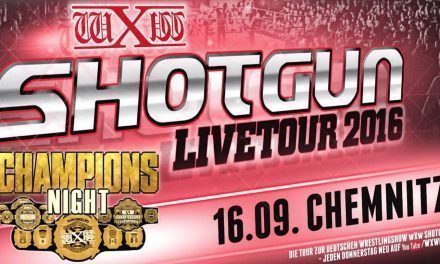