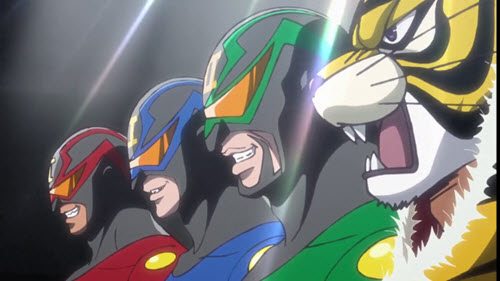 Last week in Tiger Mask W, we saw our titular hero turn his back on New Japan Pro Wrestling and sign a deal with GWM. When promised a title shot against The Third, the man responsible for crippling his mentor Daisuke Fujii and his friend Takuma (Tiger the Dark), he turned to the dark side. A group of wrestlers known as the Miracles have been sent by GWM to invade NJPW and Tiger Mask has been forced to stand alongside them. We’ve got ourselves an invasion angle! Before we get into this week’s episode, don’t forget that you can watch every episode of Tiger Mask W over at Crunchyroll and if you want to find the rest of my recaps, you can do that here.

Lie down in the dirt

Cling to my convictions

Even when I get hurt”

When the episode begins, we’re at Takaoka Motors where Kentaro is chastising Naoto for his choice to align himself with GWM, the very institution that he’s trying to take down. He wonders if Naoto’s devotion to revenge has clouded his judgment. Like any good, rebellious teen, Naoto throws Kentaro’s own hypocrisy in his face, pointing out that both Kentaro and the original Tiger Mask came from the Tiger’s Den (the institution running GWM from behind the scenes). Naoto’s cell phone rings and he leaves the discussion, knowing that neither man will change their mind. Already understanding this, Haruna didn’t even try to interject herself into the argument, instead choosing to eat ice cream and watch the show. Suddenly, she becomes the most relatable character in the series. She advises Kentaro to let Naoto do what he wants for a while. In his current state of mind, he won’t listen to anybody else.

When Naoto gets outside, he sees that he’s getting a call from Daisuke-San. Fully expecting to get scolded by his trainer, Naoto is surprised to hear Takuma’s voice on the other end of the phone. Takuma insists that Naoto comes to visit him in the rehab facility. It’s interesting how different Takuma seems now that he’s been stripped of the Tiger the Dark identity. His past gruffness is gone and his voice sounds like a weight has been taken off of his shoulders. For the first time in a while, Takuma has the chance to make plans with a friend.

Over at the New Japan offices, the topic of discussion is about how Tiger Mask has become the talk of the wrestling world. Yuji Nagata doesn’t like anything that’s going on with the Miracles, but he has to keep booking them because of how much buzz they’re getting New Japan. What Nagata doesn’t realize is that his attempts to beat GWM by outdrawing them is allowing them right into his home. He gathers together Okada, Tanahashi, and Naito to get them to put up a unified front against the invaders. Tanahashi and Okada are all for it, but Naito (who was late to the meeting) says that he and LIJ have to go to Mexico to fight off invaders in (presumably) CMLL.

As Nagata fumes over Naito’s uncontrollability, we see Naoto (and his awful shoes) sneak in the backdoor to visit Takuma. His shame over joining up with GWM won’t allow him to face Takuma. Something that Takuma shares with his father is a love of pudding, so Naoto made sure to bring some with him on the visit. The two friends catch each other up on what they’ve been doing for the past three years and how they transformed from Naoto and Takuma to Tiger Mask and Tiger the Dark. Takuma attempts to tell Naoto about the mistake he’s made, but Naoto refuses to listen to him too. When Naoto leaves, Daisuke tells his son that he’s spent enough time sitting around, now it’s time to begin rehab if he ever wants to get back in the ring.

The trend of Haruna eating snacks while unenthusiasticly listening to Naoto’s problems continues. Naoto insists on going to the New Japan show without her because he’s not sure how the crowd will react now that he’s a heel. It’s worth pointing out that the show referred to him as a heel many times over the course of the episode. As of the day of this writing, there was a lot of talk on Twitter today about how non-wrestlers shouldn’t use “industry terms,” but here’s a children’s cartoon throwing them around. Take that how you will.

“Drift down into the new dark light

You found my breaking point

Tiger Mask makes his first appearance alongside the Miracles at the first night of New Japan’s Big Dream tour in Kourakuen Hall.

Showing the new feeling of unity in New Japan, we have CHAOS’ Ishii joining up with the New Japan Army for this match. Ishii and Tiger Mask start off the match. While commentary refers to Naoto as Tiger the Traitor, he plays fairly in the early goings. The worst we get is an illegal tag team combo with Miracle I. Things seem pretty evenly matched, but the tide turns when Miracle I hits an avalanche Miraclerana on Honma, which is then followed up with a chair assisted frog splash from Miracle II. As the rest of the heels play defense, Miracle I pins Honma and scores the three count. **

“Spent too much of my life now trying to play fair

Throw my better self overboard, shoot at him when he comes up for air”

Things don’t stop when the bell rings though. Miracle I holds up Honma while Miracle II hands Tiger Mask a chair, wanting him to prove his loyalty to GWM. After a split second of indecision, Tiger smashes the chair over Honma’s head. At home, Haruna is shocked by Naoto’s heel tactics as he begins to tee off with the chair on Nagata. At the GWM medical office, Ruriko looks disgusted by the actions of her friend.

“President of the fan club up there

Choking on his tears

Let all the trash rain down

From way up in the rafters

I’m walking out of here in one piece

Don’t care what comes after”

At the next New Japan show, The Miracles and Tiger Mask take on another foursome of New Japan wrestlers. Ishii takes the brunt of the attacks this time around. The crowd has totally turned on Tiger Mask, screaming properly mean things at him. In the upper deck of Kourakuen, Hikari Kurama and another journalist talk about Tiger Mask’s new heel actions. Hikari calls him the new Yellow Demon, a title that we’ll see pop up later on a wrestling newspaper. The name seems to be important, but a quick bit of research didn’t turn up any results so I’m thinking that actually might not be a reference to something from a previous Tiger Mask series like I first assumed it was. The match comes to a close when Ishii falls to the Miraclerana/chair assisted frog splash combo.

The next day, Ruriko sits in a café when she receives a phone call from Daisuke Fujii. He asks her for help with something that we don’t initially hear, but we soon see that she has apparently left her job at GWM to come back as a rehab nurse. It didn’t seem to take much convincing to get Ruriko to come help Takuma get back up to fighting strength. It makes sense though when you remember that Tiger Mask is the entire reason why Ruriko took the job at GWM. She was already thinking of leaving the job behind after Takuma was injured. Now that Tiger Mask has turned evil, she has no reason to stay at this company. Plus by helping with Takuma’s rehab, she has an opportunity to right the wrong she made when she allowed Takuma to wrestle while he was already injured.

The war continues on the third show of the tour. This time, Okada and Gedo team up with Tanahashi and Nagata to face off with the invaders. They’ll be out to avenge the injured Ishii after last match. Nagata starts off with Tiger Mask, kicking him hard in the leg and vowing not to lose. It doesn’t take long for the match to devolve into a huge brawl. Tiger Mask and Tanahashi exchange brutal forearm strikes outside the ring while Gedo is worked over in the ring. Miracle II hits Gedo with a Styles Clash and picks up the win for his team. **

I don’t want to die in here

I don’t want to die in here”

After the match, Miracle I starts yelling about how they’ll continue to multiple again. When Nagata call him out on saying that over and over with nothing happening, Miracle IV steps through the entranceway. With the heel group having five members now, Nagata make a big challenge. At the final show of this tour it will be the Miracles and Tiger Mask taking on New Japan in a five on five elimination match. As his partners jaw in the ring with the New Japan wrestlers, Tiger Mask takes his leave. In this situation, he’s truly a mercenary. This isn’t Naoto’s war, he’s just a gun for hire.

If you’re wondering where the song lyrics I’ve been sprinkling through the review are from, you can hear them in Heel Turn 2 by the Mountain Goats. This episode made me think of this song almost instantly, but I didn’t realize until I was relistening to it how much the lyrics mirror the plot. Naoto tried doing things his way for so long, but he thinks that he can only get what he wants by going to the dark side. It’s rare that we get to see the psychology of a heel turn explored well and here we have an example of it happening outside of the wrestling ring. Tiger Mask W has been fantastic as of late. The matches this week may not have been very good, but the story around them is top notch. Also great is the Mountain Goats’ album, Beat the Champ. The concept album is all about the southwest territory days and is the best music about wrestling for my money.

Isn’t it great when everything that you get to talk about is good?! Hopefully the quality train keeps on rolling. Talk to you all next week! 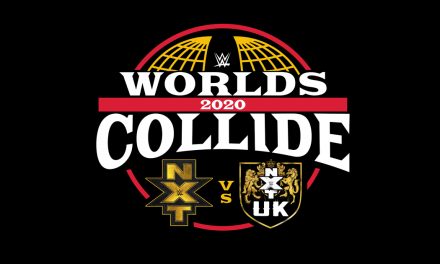 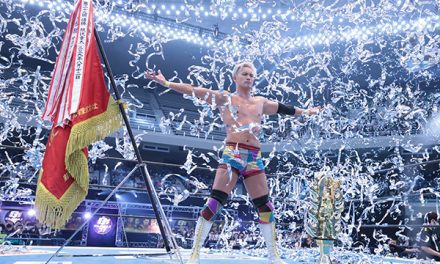 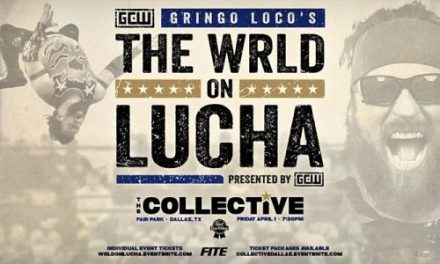