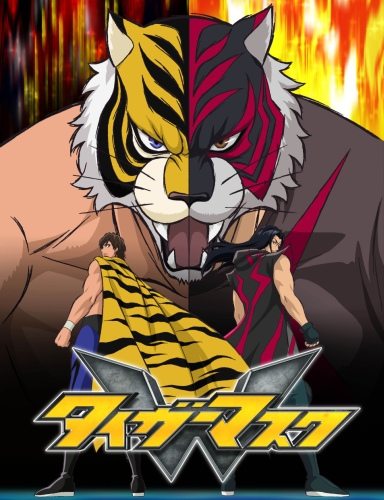 With an invading force from GWM and a battle with a mixed martial arts master ahead of him, Naoto has a lot to deal with this week. Welcome back to the Tiger Mask W review, now with 100% more hand cramping! I suppose that’s what happens when you spend a day chopping down part of a tree so that squirrels can’t try to break into your house anymore. So with that in mind, I’m going to try to keep things a bit shorter than normal today. Before we get to the review, don’t forget that you can watch every episode of Tiger Mask W over at Crunchyroll and if you want to find the rest of my recaps, you can do that here.

This weeks the show begins with Miracles I and II taking another disqualification loss, this time to Honma and Makabe. This team seems obsessed on causing chaos in New Japan, regardless of whether they win their matches or not. Once again, Miracle I promises that this will continue and they will multiply. Backstage, Makabe complains about the team to Yuji Nagata, who says that as long as the fans are hot for the team, he’ll have to keep booking them. Makabe demands to be their next opponent, but Okada steps in to say that he’ll take care of them himself. Not only does Okada want to defend his company, but he wants to fight back against GWM, who is running a show on the same day as the final stop on this NJPW tour. Little does Okada know, but with the Miracle’s being invaders sent by GWM, he’s fighting against them on both fronts.

In anticipation of his big match with Tiger Mask, GWM holds an open workout for King Tiger. King uses his impressive martial arts skills to destroy a punching bag. The GWM commentator reacts exactly like you expect him to, yelling out “OH! GREAT!” because that’s how a regular human reacts to seeing something cool. King Tiger’s mask is nearly identical to Tiger Mask’s, but he’s missing the tip of the left ear of his mask. It’s a nice little detail to help differentiate the two and it also helps get across King Tiger’s battle hardened image.

At the workout, Haruna meets with Miss X to go over details of the match and she’s shocked to find out that they will be using “unified rules.” American wrestling fans might be more likely to know of these rules as hybrid rules, mixing MMA and pro wrestling. The match will consist of 10 five minute long rounds and can only be won by knock out, tap out, or ref stoppage. Interesting to see something like this pop up in the show. I would have to assume in a world where pro wrestling isn’t a worked show, there wouldn’t really be a need for something like MMA, but I guess that isn’t the case.

The story of the love triangle between Naoto, Ruriko, and Tiger Mask continues when Tiger Mask sees Ruriko at the open workout and asks her why she looks down. Ruriko confesses that she’s considering leaving her job as a GWM nurse after seeing Takuma get so injured in his match with The Third after she could have stopped the match from happening. She tells Tiger Mask that he’s the wrestler that got her into wrestling, but she fails to mention that Naoto was the one to take her to the show. This whole Superman-Lois Lane-Clark Kent situation that’s going on is not good for anyone, especially for Naoto, who is losing the battle to his mask. It’s Naoto’s damn fault that he’s been more natural and open with Ruriko as Tiger Mask than he ever has as himself. He opens up to her about why he became a wrestler and how much he wants to inspire people through his wrestling. Before the two can really have *a moment*, they’re interrupted (purposely?) by Haruna, who beckons Tiger to come to the contract signing for his match.

The match starts with a short feeling out process, but King Tiger quickly takes control with hard kicks and strikes. Tiger Mask goes for a single leg takedown, but King Tiger immediately gets to the ropes before he can capitalize. The bell sounds for the end of the first round, thus making this round the fastest that five minutes have ever passed. During the break, Tiger Mask tells Haruna that he’ll finish things next round. I think someone might be a little overconfident.

The bell rings for round two and King Tiger charges in with a flurry of strikes. Tiger Mask gets the hell beaten out of him. Just when it looks like he’s out, Naoto finds the strength to get back to his feet. King Tiger goes for the killing blow, hitting a sickening axe kick to the top of Tiger Mask’s head, splitting him open. Tiger Mask falls to the mat and the referee starts to administer the ten count. In a dazed state, Naoto has a vision of his trainer, Daisuke Fujii, which wills him back to his feet. He just manages to beat the count, and then faces another onslaught of strikes. Tiger Mask covers up and survives in the corner until the bell rings, ending the second round.

As round three starts, the two men charge at each other and, once again, King Tiger beats Tiger Mask like he owes him money, eventually knocking him down and hitting a double foot stomp to his back. Tiger Mask gets up at the count of six and King Tiger immediately attempts his axe kick again. This time he sees the kick coming. Tiger Mask sacrifices his shoulder to the kick for an opportunity to grab King Tiger by the leg. He quickly snaps the ankle of King Tiger before throwing him into the ropes. King Tiger staggers off the ropes and is hit with a hard lariat. Both men find themselves down after this exchange, but with the fans chanting his name, Tiger Mask rises to his feet with a renewed energy.

King Tiger attempts his jumping axe kick as a last ditch effort, but Tiger Mask jumps with him. Naoto catches the shaken fighter and slams him to the mat with a Tiger Driver. The referee checks on the motionless King Tiger and calls for the bell, awarding the match to Tiger Mask via KO. There was more than a bit of a learning curve for Naoto in this one, but he showed that he can deal with different styles of fighters here. The battle may have taken a lot out of him, but he found the internal power to make his comeback and find the hole in King Tiger’s game. ***3/4

Following the match, Tiger Mask calls to Miss X from the ring, asking if she won’t give him a match against The Third, even after a display like that. Miss X responds by offering Tiger Mask a contract in her office. She says that is he signs the deal, he’ll get his match. As Tiger Mask grabs the contract, we cut over to the New Japan show where Okada and YOSHI-HASHI are taking on the Miracles.

Once again, the match is a no contest after excessive brawling on the outside. The young lions hold all four men apart, while Miracle I screams about multiplying. After he says that a Miracle III appears on the entrance ramp. Then another man joins the side of the Miracles and…. It’s Tiger Mask!?!?!? Say it ain’t so, Naoto?! Miracle I promises full out war with New Japan as everyone looks on in shock. Daisuke Fujii and Takuma watch from their assisted living center and Takuma wonders how Naoto could have been so foolish to make the same mistake he did in siding with GWM.

Well, it sure looks like Tiger Mask signed with GWM so that he could get that match with The Third. On the downside, it looks like he’s been drafted into a war against New Japan that he doesn’t want to fight. Nevertheless, if the preview of next week is any indication, it looks like Naoto will be doing a lot of fighting with his former friends in New Japan. The invasion is heating up and next week can’t come soon enough.