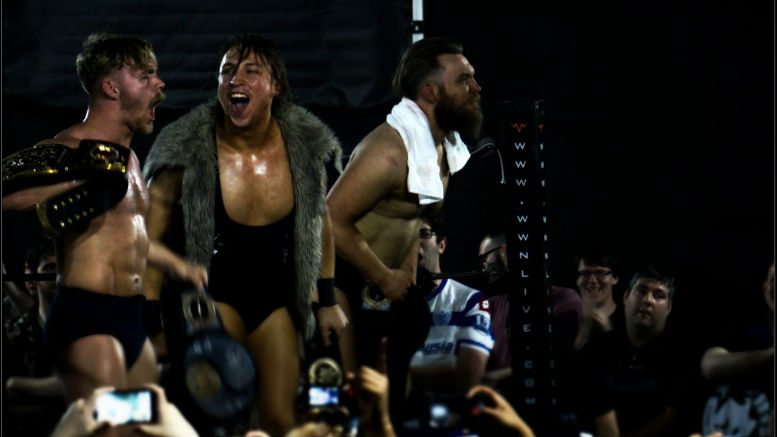 We’re in Orlando, duh, for ‘Mania weekend’s Progress: Orlando show. They open up with the Drake song video updated to include recent shenanigans, which is a string of amazing visuals. It occurs to me there’s still a load of Progress shows I’ve never seen, having started into their history at the end of Havoc’s title reign.

Host in the ring is Jim Smallman, as always. He’s in an ebullient mood at the thousand plus attendance. The crowd is an interesting mix of British, American and other. The result is that some of the normal noise occurs but not always. Commentary comes from Lenny Leonard and Excalibur.

Sabre is technically excellent, as always, leaving Havoc trying to figure out some escapes before just rolling into the ropes. It’s a fun story of Havoc testing himself against the best and coming up short. Whenever Zack wants to he just takes over and stretches Jimmy. Some of Sabre’s technical work in this is utterly sensational. The transitions are flawless. The story of the match changes when Sabre gets opened up above his eye. This allows Havoc to take over but Sabre is a sensationally good defensive wrestler so he’s able to still dominate. With Sabre having this outstanding technical prowess it’s tough for him to tell any other story. Sabre takes this with a flipping pin from a backslide, which is perfectly in tune with Sabre’s dominant performance. ***1/2

James Drake is out of his element in Progress. He doesn’t have a defined personality, he’s just a solid wrestler. Well, guess what? There are hundreds of James Drake’s. At least Spud knows how to make an entrance, even if I’ve never been keen on his work. Drake bosses the match leaving underdog Spud with comeback spots. Everything more ambitious is a mess. Including Spud’s tope, which almost goes horribly wrong and an overhead belly to belly where Spud lands on his head. Much like previous Drake matches he hits his finish out of nowhere, with no build, and continues to be unbeaten (he’s now 4-0). The crowd continue to not care. When your personality is that of a grumpy heel who can’t talk you do stand out in Progress but for the wrong reasons. *3/4

Post Match, Jim Smallman gets a bit shirty with how quiet the crowd are. It was an issue over the weekend, although far more pronounced at EVOLVE shows. When your shows are built around noisy crowds it’s tough to deal with the opposite happening.

Jinny does good work from the off, gesturing around her waist as these two are going to collide for the women’s title at some point (plus whoever wins Windsor vs. Di Matteo). Jinny has improved her in-ring so much over the past 18 months and in the same timeframe Toni has been working on evolving her character. The result is that Progress have two sensational talents who are set to do battle for years to come in a series of increasingly great matches. Jinny keeps adding to her repertoire and she’s such a bitch that Toni, who’s big and strong, can get that sympathy from working with her. Jinny is, for my money, the biggest success of the ProJo. Jinny’s attempts to mentally break her opponents by making them wear bin bags is a fantastic trait and Toni understands this perfectly. When you get psychology and the importance of selling you’re halfway to having great matches. Jinny gets the pinfall win here with her feet on the ropes. The execution of the storyline here was excellent. Sooner or later these two are going to have a blow-away good match. It just needs a little more storyline and heat to it. ***1/4

Dahlia gets carried to the ring by security as she’s got a broken leg. Sami worked just about every show over ‘Mania weekend. He has got a history in Progress though and was in SSS16 last year. With the progress that TK Cooper has made of late, and the Power Trip as a team, they’re a genuine highlight of any show they’re on. That’s no different here. The work is fantastic throughout. The only issue stems from Sami Callihan feeling the urge to get the crowd to clap. I have issues with babyfaces who start the fans clapping. If you can’t get the crowd hot with the work then you’ve got problems. It feels like a nervous tick at this point. Anyway, the actual wrestling is wonderful. Lots of flips and high speed, effortless interaction. There are zero fucks given and bumps into the chairs are frequent. Travis Banks hitting a casual as hell Van Terminator right after a Tower of Doom spider-superplex is fucking incredible. That’s how you utilise four guys being in the same ring at the same time. The whole match has that vibe. It’s tremendous work and Travis Banks is at the centre of all that’s good. If he wasn’t on American radar yet this should do it. TK Cooper looks entirely at home in this environment, showing how much he’s improved since moving to the UK. His original gimmick in Progress was being Dahlia’s valet. How times change! He killed that gimmick and he’s killing it in this tag team. This match is so good. They don’t bother with tags but it doesn’t matter. It’s tremendous work and the crowd erupt into the “This is Progress” chant loudly as it peaks. Travis and Sami used a load of these spots in the Rev Pro opener (Epic Encounter) but the execution both times was excellent. SPPT double team their way to victory. This was easily the best match on the show and arguably the best match of ‘Mania weekend. SPPT were phenomenal. ****1/2

Trent wants this over quickly so he can go to WWE Axxess. Riddle had a tough day coming into this, working Galloway and Dan Severn. Trent had a tough day too, he got drunk at Joey Janela’s show. I would rather be tired than hungover. Not that Riddle gets tired from wrestling, it’s more like an extended work-out. Riddle’s slightly different approach to wrestling is in evidence here, particularly when he hits an avalanche fisherman buster. You just don’t do that. The style of this match is the kind of thing I live for. It’s classic strongstyle with two guys battering each other and no selling. Trent has been working this style for some time but Riddle finds it easy to slot into. He’s effortless at switching his game around to meet his opponent head on. Trent tries everything to put Matt away including his spinning piledriver finisher, which pinned Riddle at the end of last year. One of Trent’s most endearing character traits is his willingness to lie down for secondary finishers, meaning his matches could end at any time. It creates a better atmosphere on the near falls than you usually get from matches. Trent also does the no selling like a champ so he kicks out of the piledriver at one in a fantastic visual before being put away with the Bromission. This match was right up my street. ****

This is the first time a WWE title has been defended on a non-WWE show in a long, long time. That shows what an extraordinary situation wrestling is in right now. WWE’s normal ‘closed door to Indies’ policy has been kicked open. Tyler working heel is still odd to me, especially when he’s not hanging around with Seven and Dunne. When left to his own devices a lot of the heel mannerisms fade away and he focuses on the wrestling. It quickly becomes a game of one-upmanship. Who can nail the best looking nip up etc. Athletically they’re evenly matched and it is easy to forget how good Mark Andrews is. They perhaps don’t have the consistency, in terms of excitement, that other matches have had on this card and that hurts the crowd’s reaction. The wrestling is solid and Andrews certainly does enough flips to justify this going on second last. Tyler is still developing as a wrestler and his structuring is improving as he works with an assortment of opponents. Progress don’t generally put him in big singles matches, making this an anomaly. There are moments where he flashes back to his babyface antics from Natural Progression era Tyler. The match has some seriously wacky spots in it, including Andrews hitting the Kudo Driver for a near fall. It’s at this point that the selling goes wonky and the Tyler Driver ’97 finishes. That Kudo Driver in particular had no business being a near fall without a rope break and with no selling afterwards. ***1/2

I am so pleased for Mark Haskins; to see him come back and be a main event star so soon after injuries threatened to derail his career. He is one of the best wrestlers in the world and deserves the exposure that ‘Mania weekend brings. I’m also glad the crowd boo Pete Dunne, who deserves that as a top heel. Moustache Mountain accompany Pete so they can do the Triple H water spitting business pre-match. The commentators do a fine job of explaining the storylines for first time viewers. Haskins is all about Progress while Dunne is using the company as a stepping stone to get into WWE. The match has an unfortunate reliance on outside interference and Moustache Mountain’s presence is a distraction. It takes far too long for Joel Allen to get sick of it and send them backstage. When you have outside inference it needs to be logical and it isn’t here. Until they’re ejected the match can’t get underway properly. After they’re gone Pete grinds through a period of heel dominance. While both men are great wrestlers and tremendous characters this really takes time to get going. When it does perk up it’s largely thanks to Haskins running through his innovative and exciting moveset. Once they get into the business of putting on an athletic competition it’s all good and the crowd bite on it, for the most part. It looks warm in Orlando. It’s perhaps not the best environment for a chap like Haskins who overheats. Pete does fine work in going after Haskins’ neck to set up big finishing moves including the Pedigree, which Haskins kicks out of. The slightly lethargic crowd, who seem as effected by the heat as the boys, hurts the reception of the match but it’s still great wrestling. Dunne seems to find a way out of everything Haskins brings to the table. It’s good booking to have Dunne look so clever and competitive. Haskins survives the Bitter End but gets trapped in the Regal Stretch and all that neck work pays off with a submission. This match would have been a banger in front of the Camden crowd. As it stands the structuring was top notch after early issues had been passed by. Both Haskins and Dunne are terrific pro wrestlers. ****

It’s quite telling that the British promotions that went over to Orlando put on some of the best shows of the weekend. Progress: Orlando and Rev Pro at WrestleCon were both good showings. The South Pacific Power Trip match from this show is one of the best from ‘Mania weekend and apart from Drake-Spud, which is completely skippable, this was a solid show throughout. 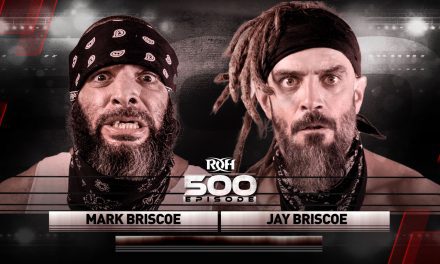 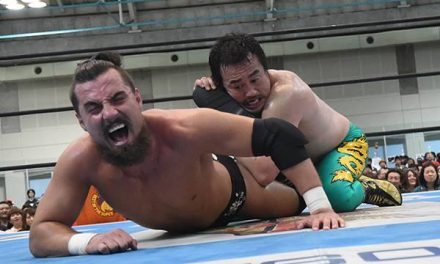