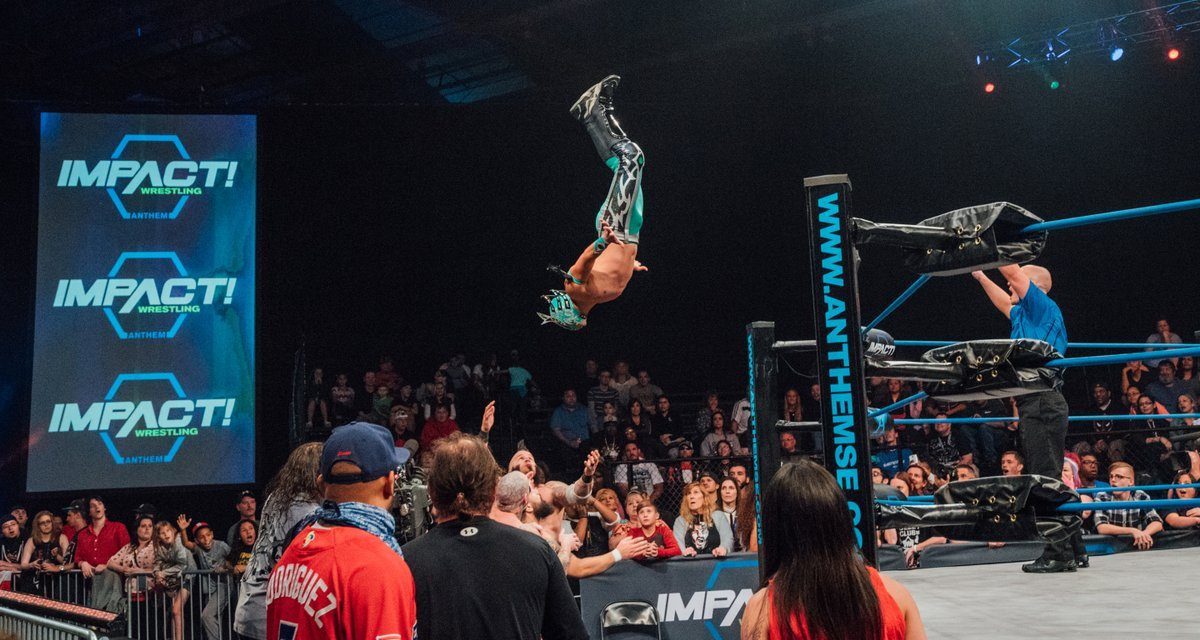 The weakest aspect of this show is the number of hangers-on. Bruce Prichard, Dutch Mantel, Jeremy Borash, Josh Mathews, Pat Kenney, Karen Jarrett and Rafael Morffi are all active characters on this show to one extent or another and none of them are active wrestlers. There’s only so much oxygen to go around on a wrestling show and that group is sucking up a disproportionate percentage of it.

Impact began with Karen Jarrett addressing Sienna’s recent actions. She talked like Sienna had murdered somebody or something but I’m not entirely sure why she was so angry. Sienna has mostly been a mild nuisance to Allie for a couple weeks. Apparently bullying has made Karen so furious. Karen was doing Stephanie McMahon-lite belittling talent. Karen demanded an apology before Kevin Matthews (going simply my KM, a relation of Mr JL no doubt) debuted and associated himself with Sienna as her cousin. KM shouted a lot. Braxton and Allie ran them off. This segment could have been constructed entirely without Karen. Allie vs. Sienna is the dispute, Karen’s involvement felt like an inorganic way to squeeze her onto this show.

This didn’t get a tonne of time but this was fun stuff and it’s nice to get a singles match in the X-Division. They’re building toward an Everett/Lee title match so this was intended to be an Everett showcase. Everett won after reversing the ZDT into a small package, Everett’s win should have been a little more emphatic to set him up as number one contender. After the match Shane Helms mocked Everett for beginning a 1-0 winning streak. He’s right actually, that was Everett’s first ever singles win on Impact. Helms said it would take more than one win to get an X-Division title shot, except that Everett received title shots on the January 26th, March 2nd and March 16th Impact’s. So is Helms saying the less you win the more you get title shots? **3/4

Rosemary made her way to the ring as Josh Mathews talked almost exclusively about himself. Rosemary talked about how she’s destroyed the entire Knockouts division before a cavalcade of Knockouts (including some women who have never appeared on this show and I have no idea who they were) staked a claim to Rosemary’s belt. ODB was presented most forcefully as the next contender.

EC3 did a character reset promo – basically restating his mission statement and accepting that he has to re-find his mojo. EC3 promised to win the World title for a third time. EC3 is a character that could badly do with a reset. He’s been presented as top guy adjacent for the last year but damage has been done by losing in big matches too often. James Storm interrupted and basically did a character re-positioning too back toward his TNA original Cowboy act. He mentioned Elix Skipper walking the cage so he gets bonus points for that, Impact doesn’t break that clip out nearly often enough these days. Good stuff from two people who majorly need some juice.

This was a strange match. Cody superkicked a judge by accident, who was then replaced by Bruce Prichard (which I desperately hope doesn’t set up some sort of Cody/Prichard dispute) and there was also some antics surrounding Brandi at ringside (she eventually walked out on Cody). When they got down to action the match was really fun and Moose is really well suited for doing the sort of condensed sprints this format demands. But there was just too many distractions to make the match feel like anything other than less than whole. Moose won via judges decision, something they’re leaning on way too often in Grand Championship matches. **1/2


As a debut KM didn’t look up to much here. Sutter looked considerably better in fact. KM won with a Project Ciampa. *


This served predominately as a tremendous showcase of LAX. The finish was them systematically destroying the other three teams and winning the titles. It was about as conclusive as can be. Laredo Kid and Garza impressed as well making me badly want a series of matches between them and LAX. Both Laredo Kid and Garza could be huge assets for the company if they don’t follow the pattern of nearly every other international import in Impact history. The new LAX are the best choice to carry the division and there’s a bunch of interesting matches waiting for them. The match was utter chaos and the idea of rules was thrown out the window but it was a lot of fun and a super display of the new LAX. This was a really good end to a pretty meh show. ***1/4

This was largely a bland dull episode with a couple of poorly plotted stories but the main event segment was extremely effective.