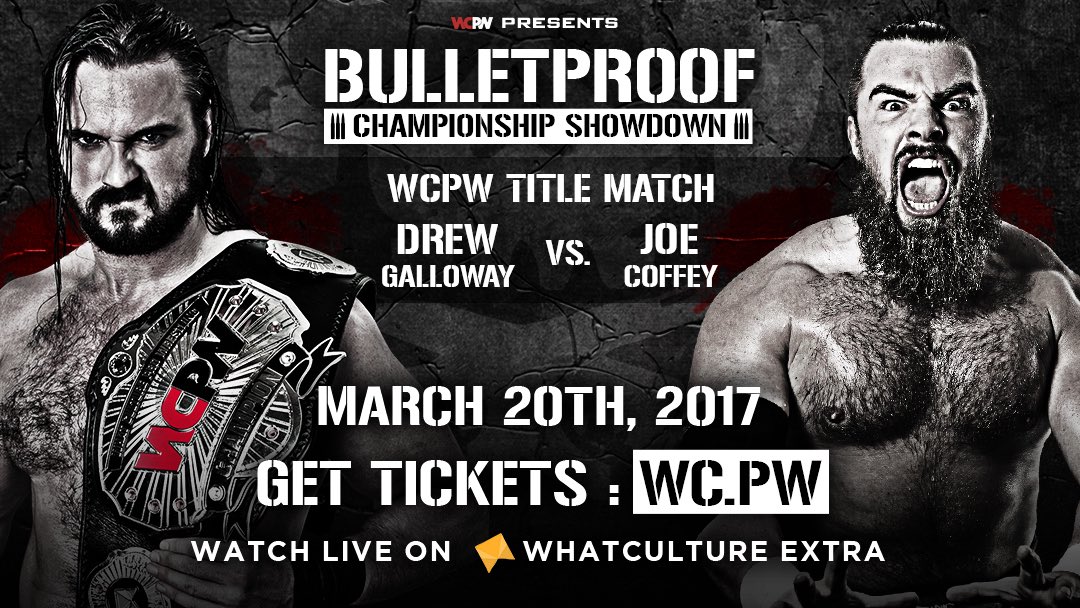 WCPW had a busy week of action, starting with this Bulletproof iPPV before going on to tape the first two qualifiers for the Pro Wrestling World Cup. As an iPPV card this didn’t blow me away ahead of time, it felt more like a set-up show for things further down the line, but there was enough talent on the card (with guys like Ospreay, Riddle, the Young Bucks, Rampage, Banks, Ricochet, Scurll, Cole, Sabre and Galloway to name but a few) to think Bulletproof still had a strong chance of delivering.

Oddly enough the aesthetic set up for this show is one of WCPW’s weakest. It doesn’t look bad, but their shows usually look ultra professional while this one is lacking a video screen and in general just comes across as standard ‘big indie show’ setup. It’s odd given that this is an iPPV for WCPW, yet many of their smaller shows have had a more big-time setup.

As this match was starting the Bucks christened it a ‘Tornado Tag Spotfest’. A spotfest was exactly what this was. It had its fun moments but overall felt very disjointed with a lot of timing issues; the match as a whole ended up being just a series of moves. I’m not usually opposed to a high pace spotfest opener but given the talent in this one (Ospreay, Riddle and the Bucks especially) and that this wasn’t even a particularly good one, and this came across as very much a waste. The Swords of Essex retained with their double stomp/death valley driver combination finisher. **3/4

This was essentially an extended squash for Rampage ahead of his title match that is coming up in Orlando for Mania weekend. Drake got some early offense in before getting steamrolled by Rampage and losing to a piledriver in quick fashion. Fine for what it was. *3/4

This was going to be Austin getting a title shot, but Priestley refused to compete, saying this Austin needed to go through Viper first. For the most part this was a competent match, but at the same time it was utterly forgettable. Viper can be good when in there with a dynamic opponent who is willing to get thrown around, but Austin wasn’t that here. The match was very basic, and ended in a victory for Viper via a sitout powerslam. **

After the match GM Adam Blampied came out. He reminded Bea that she didn’t get to pick and chose her matches, and as a result of refusing to compete before she would now have to defend her title against an opponent she hadn’t prepared for: Tessa Blanchard.

This match was a lot more ambitious than the match prior, which wasn’t necessarily saying much. It wasn’t a great match as neither of the two women are the smoothest workers at this early part in their careers, but a way higher level of effort came across here. Not everything they did came off, and there were a few ugly moments, but you could see some good ideas in there. I enjoyed Bea’s armwork and Kimura submission, and thought the way they did the interference for the finish with Viper grabbing Blanchard’s leg to prevent  her from getting the leverage to escape the submission was nicely nuanced. **1/2

This was an elimination match with the winner getting a title shot down the line (perhaps in Money in the Bank style, it wasn’t quite made clear). The early portions of this match felt fairly disjointed, as matches with this many participants have a tendency to be, but were really held together by many of the strong characters in the match. Things started to quick after a while though, and Doug Williams went on a spell of looking really good until the two Prestige members eliminated both him and Ligero. With the numbers narrowed down to five the match began to start finding its rhythm, with Ricochet and Scurll being the standouts of the middle portion. Scurll was next to fall, with him getting caught out by a backslide from Kirby. The match then transitioned into a de facto two-on-two match between Kirby and Ricochet and the Prestige members Gunn and Banks. This was the best portion of the match, with all four guys getting their chance to shine and delivering. Ricochet would manage to eliminate Gunn only to be immediately eliminated by a roll-up from Banks. Kirby then managed to best Banks after some good back and forth with a Sable Bomb, giving him the victory in the inaugural Magnificent Seven match. ***1/2

This was a rematch from Chain Reaction after Cody Rhodes had to pull out of the event due to being double booked with an Arrow taping. I think Kidd has some real promise. He’s clearly athletic, has good size, seems to have the timing of wrestling down and he’s already starting to nail out the crowd interaction aspect (albeit from a very basic underdog route). Throw in that he’s got all these things at just the age of 19, and I’m very hopeful that he can really develop into a name talent at some point down the line. However, at this early point in his career to put on a really good match he still needs to be in there with somebody dynamic. Joe Hendry is not a dynamic wrestler. He’s a very good talker, he’s charismatic (as a face at least, he hasn’t shown too much as a heel yet) and he’s a very solid in-ring wrestler, but he’s not very dynamic. As a consequence of this, this contest went down the road of being a perfectly competent match that didn’t really grab me at all. It was fine, but it was completely forgettable. Hendry won, continuing Kidd’s losing streak, with a flash pin while he was grabbing the tights. **3/4

This was originally scheduled to be Cole vs. Sabre until Cole lost the ROH championship. Cole originally threatened to pull out of the match altogether due to surgery, which then brought out Daniels for a suprise appearance. When Daniels put the belt on the line against Sabre, Cole reinserted himself into the match to make it a triple threat.

This ended up being the best match on the show. All three guys worked well with each other, and for a triple threat match it flowed well. Sabre is a guy I’m always pleasantly suprised by how well he works in triple threat matches; you wouldn’t naturally feel his style would lend itself to the format but he consistently does well. He has a triple threat match early in the history of PROGRESS with Ricochet and Mark Haskins that was for a long time my favourite PROGRESS match.

Sabre and Daniels were in the spotlight for the majority of this match, with Cole regularly making brief interludes to try to steal the title but to no avail. You got the sense all three guys were holding a little back here, it wasn’t an all out 100% have the best match possible effort, but it was a very enjoyable match with Daniels in particular looking great. Daniels would retain the title after hitting an Angel’s Wings on Sabre and pinning Cole who had just taken a PK from the Brit. ***1/2

This disappointed me. It was a big spot for Coffey in the main event of an iPPV, but this ended up coming across a fairly uninspired effort. It wasn’t a bad match by any stretch of the imagination, but it never had any sort of main event feel. They hit each other with some big moves, but I never picked up any real story or drive; energy was lacking here. Perhaps the most damning judgement I can give here is that I’m really struggling to fine anything to write about it. The match was just there. It was fine, but I will never think of it again and as a main event it definitely disappointed. Galloway retained with his Future Shock DDT. ***1/4

After the match Galloway was attacked by Hendry and the rest of the Prestige to set up a title match down the line. This then brought out Rampage and, after a little while, the Bullet Club to clear house on the Prestige ahead of their four-on-four main event at the English World Cup Qualifier.

Bulletproof was a disappointing show. A lot of the vast array of talent on the show felt like it could have been used better, and some of the guys who did get big opportunities didn’t capitalize fully. As WCPW’s big show of the month this underdelivered; the free Exit Wounds show ran rings around it. It felt and delivered like a B show, with more of a focus on setting things up for further down the line than delivering in itself as a satisfying show. It wasn’t terrible, but there’s very little here worth going out of your way to see. 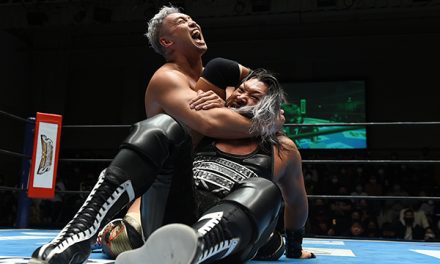 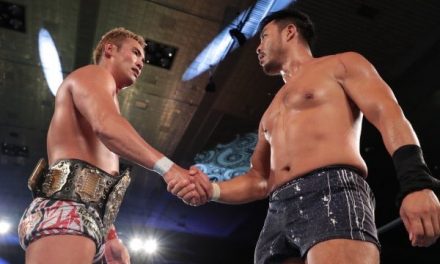