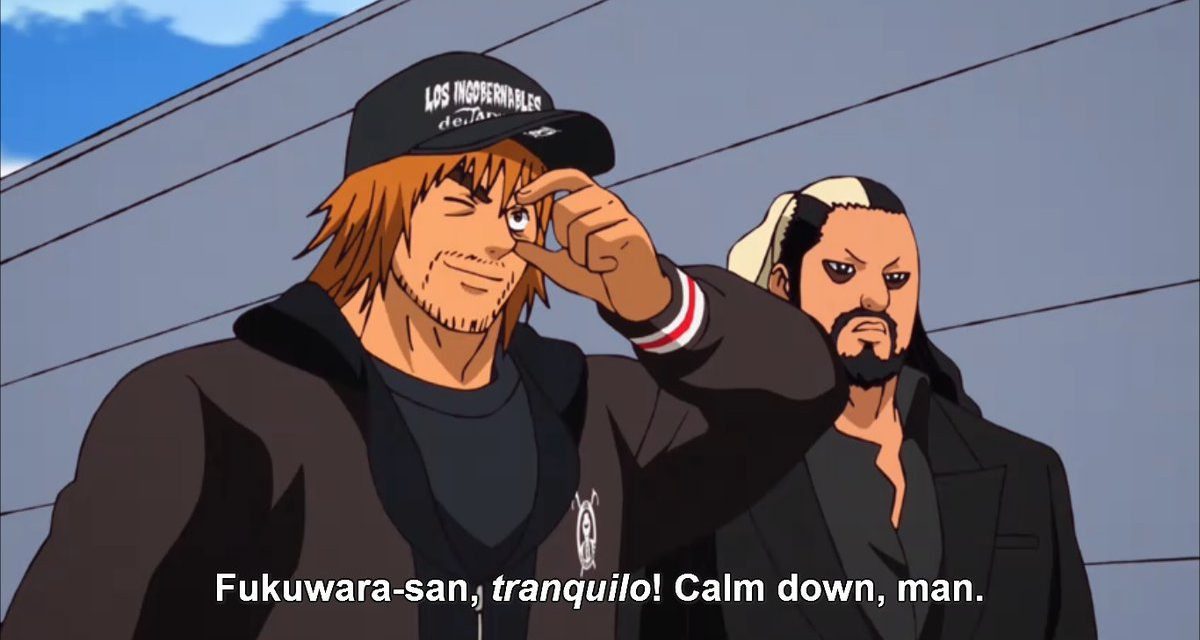 All the snow and laptop updates in the world can’t stop this column from coming out! Welcome back to the weekly Tiger Mask W review. My apologies for the lateness of this episode’s recap. The previously mentioned snow and updates managed to keep me from working on this earlier in the week, but now it’s time to break down all the Tiger Mask W action. As always, you can watch every episode of Tiger Mask W over at Crunchyroll and if you want to find the rest of my recaps, you can do that here.

This week’s episode opens on a deserted city street. Every business is closed and, save for Fukuwara Mask and the Chairman of Commerce, it appears that no one is around to operate the various facilities, much less be a patron. The situation is truly dire, but Fukuwara Mask has an idea; a huge wrestling show to revitalize the town, headlined by the super popular Tiger Mask. The Chairman greenlights the idea and Fukuwara Mask’s Wrestle Mishmash™ is a go!

The show is announced and Fukuwara Mask releases a poster that’s full of wrestlers he hasn’t officially booked for the show yet. Of course, Haruna is the first person to see this and immediately begins to scold Naoto for taking a booking without consulting her first. As Naoto pleads his innocence, Haruna’s phone goes off and, speak of the devil, Fukuwara Mask is calling to set up the booking. The angry Haruna initially turns down the event, but then FM manages to change her mind by revealing that he knows she is wrestling under the name Spring Tiger. She changes her tune once Fukuwara Mask explains that he wants to book her as well. Haruna still needs a little more convincing though, so FM sweetens the pot by saying that the MVP of the show wins a prize of 10 million Yen. This immediately makes Haruna accept the booking and once again we see a character blinded by the glow of money. Fukuwara Mask managed to fool everyone on the show into thinking that he had 10 million Yen (roughly $88,000), which is a rather foolish notion when the show is supposed to benefit a less fortunate town. I’ll spoil this for you now; in a shocking turn of events Fukuwara Mask wins the fan vote and the imaginary 10 million.

On the day before the event, tickets are selling very well. With a bit of convincing, Fukuwara Mask was able to get all of the talent he showed on the poster to agree to appear at the event, which will definitely please the ticketholders. The next day, Haruna wakes up and leaves for the show early in order to help her conceal her identity as Spring Tiger. At the venue we see a fair amount of wrestlers; Tiger Mask, Yuji Nagata, Ryu Wakamatsu, Candy Pair, Spring Tiger, and quite a few new faces. Tiger Mask and Ryu never figure out that Haruna is Spring Tiger, showing us how stupid they truly are.

Fukuwara Mask gathers the whole crew around to make a speech, thanking everyone for agreeing to work the show. The ring for the show was supposed to be provided by Unagi Mask (an analog for Super Delphin or Gurukun Mask), but the ring truck is caught in traffic and won’t make it in time. Before the show completely falls apart without a ring, Yuji Nagata steps in and promises to get the New Japan ring to the venue in time for the show to run successfully. As several wrestlers wait outside the venue for the ring truck, I’m reminded of a Dragon Gate USA show I was at years ago where they almost had to run the show with no ring because the guy that was supposed to drive the ring from Chicago to Milwaukee was attacked the night before and had been in the hospital. DGUSA booker, Gabe Sapolsky was incredibly stressed, but he made sure to keep all of us in line updated on what was going on. According to him, the Dragon Gate guys were fully prepared to wrestle the show without the ring, while the American talent wasn’t so high on the idea. I’ll never forget seeing Jimmy Jacobs sprinting down the street to find the replacement ring truck that was lost or when the truck finally showed up and the Dragon Gate roster spilled out of the venue to carry in the parts of the ring through the front door. One of these days I’ll get around to writing about that show in greater length.

Once the ring arrives, the wrestlers are surprised to see that the truck wasn’t driven by the ring crew, but by Los Ingobernables’ own, Tetsuya Naito and EVIL. Not only did Naito and EVIL bring the ring, but they also agree to wrestle in the main event of the show. While Naito might say that he’s only there to mess with Nagata, I would like to believe that he’s using that to hide the fact that he just wanted to do a good deed and work on this benefit show.

Fukuwara Mask’s Wrestle Mishmash™ kicks off and the crowd is HOT. The show starts with a match featuring two randos, but we quickly get a tag match with familiar faces. The joshi team of Candy Pair, Milk and Mint, takes on Spring Tiger and Viper Takagi. As you can see below, Viper is an analog for joshi star Emi Sakura.

We join the match in progress as Spring Tiger nails Mint with a dropkick. For an untrained novice, Haruna is a pretty solid worker. Milk tags into the match and overpowers Spring Tiger, lifting her up and dropping her down with a brainbuster. Mint continues the assault, crushing Tiger with a splash off the top rope. Spring Tiger rolls to her corner and tags in Viper, who immediately gets hit with double dropkicks and a release German suplex. The established tag team picks up the win when Milk pins Viper Takagi, taking Spring Tiger’s record down to 1-1.

The next match sees Yuji Nagata and Ryu Wakamatsu defeat two jobbers in a tag match. Even with his cushy office job, Nagata’s still got it. Finally, we get today’s main event: Tiger Mask and Fukuwara Mask vs. Naito and EVIL. The early goings of the match are kind of a cluster when the brawl spills to the outside and the Chairman of Commerce declares that there are now No Count Out rules in effect. EVIL and Naito get Fukuwara and Tiger in headlocks and lead them outside the venue where they brawl through the food vendors. We haven’t seen a fight like this since Uncensored 1995.

The match is completely dominated by Naito and EVIL, which should come as no surprise. Naito hits Destino on Fukuwara Mask, but Tiger Mask jumps in the ring to break up the pin at two, keeping his team alive. Tiger Mask tells FM to tag him in, but the crowd disagrees. They chant for Fukuwara Mask and he’s compelled to stay in and fight harder for them. EVIL tags into the match and he turns Fukuwara Mask inside out with a lariat while Naito keeps Tiger Mask occupied. The assault doesn’t stop there as EVIL plants FM into the mat with the STO. EVIL goes for the pin, but Fukuwara Mask quickly gets him in a small package and sneaks out with the win. Instead of reacting in anger, Los Ingobernables actually seems happy that the host of the event won in the main event. I’m telling you guys, Naito is really just a good dude that wanted to help out with this charity show.

The episode ends with the event being a total success. As I said before Fukuwara Mask won the popularity contest, meaning that the 10 million Yen (if it even existed) will go into the community. The show closes on a shot very similar to the one that opened the episode, but this time one of the formerly shuttered businesses is up and running again. The unmasked Fukuwara Mask enters the opened restaurant and we end things on a happy note for once. After several heavier episodes in a row, it’s nice to get a lighthearted episode. It looks like this might be the last one for a while though as next week something called War Game starts. Who knows what that will be, but I know you’ll all be back next week to find out.

Thanks for reading, talk to you again in just a few short days! 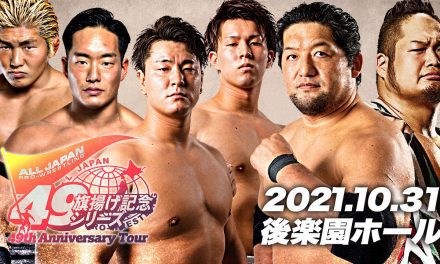 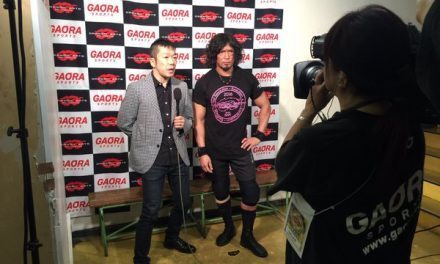 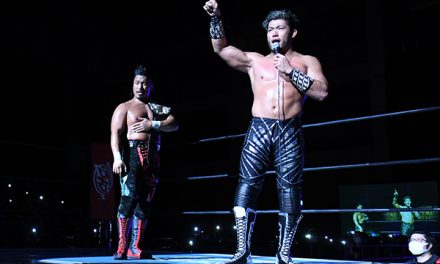