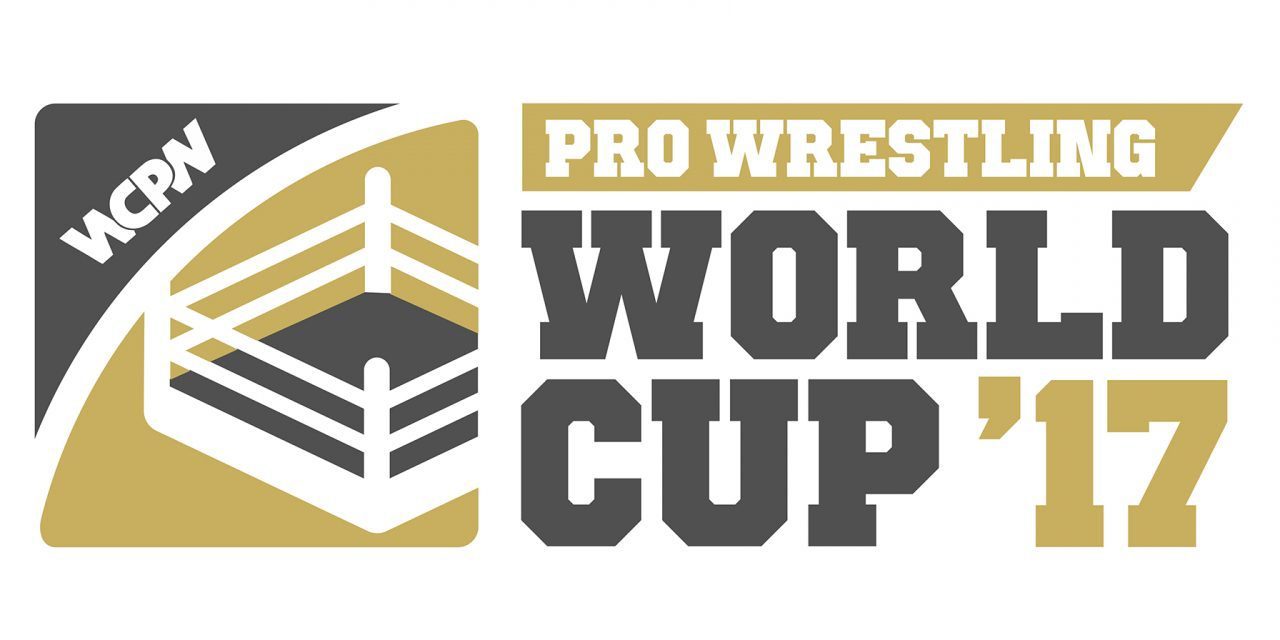 Next week, in what is perhaps the under-reported, under-discussed subjects in the wrestling world, What Culture Pro Wrestling kicks off their highly ambitious WCPW Pro Wrestling World Cup tournament.

While ideas like this have been done by numerous companies in the past, what really makes this incarnation of a World Cup style wrestling tournament is the scale. The overall tournaments will pit 64 wrestlers from 15 countries against each other over ten dates over the course of the year. The first eight shows will consist of mini qualification tournaments with the winners advancing on to the two day finals which will be broadcast live and free on YouTube.

Each qualification show will consist of two four man elimination tournaments, with the two winners from each show progressing onto what will be the 16 person finals later in the year. All eight of these shows are to be taped and released free of charge on WCPW’s YouTube channel. As of this point, dates and lineups have been announced for three of the eight qualification shows: England, Scotland and Mexico. 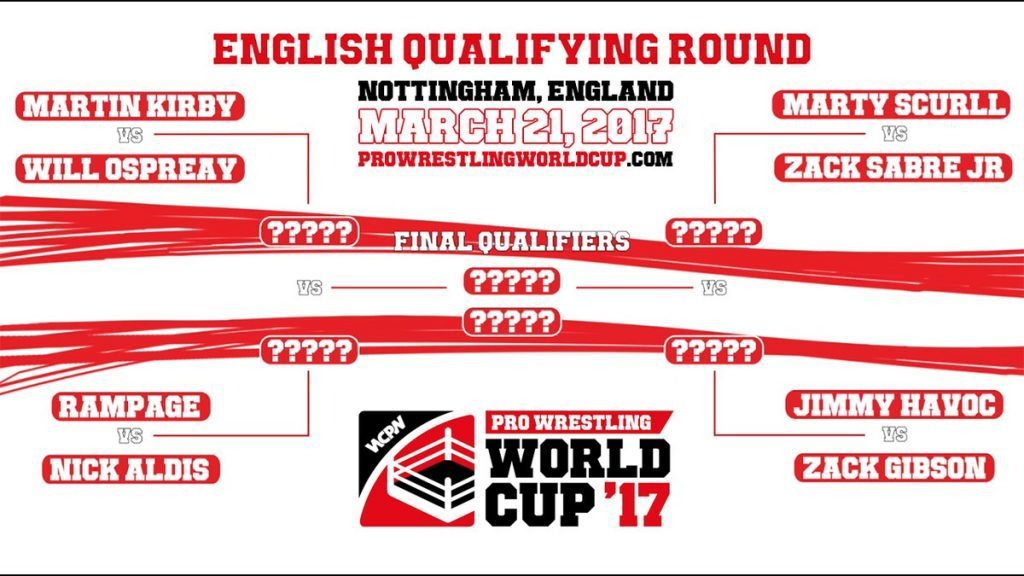 The WCPW Pro Wrestling World Cup kicks off next Tuesday in Nottingham with the English qualifying tournaments. The line-up is incredibly strong, featuring a large part of the talent pool that has revitalised and made the British indie scene the envy of the world in all three members of LDRS 2000 (ZSJ, Scurll & Ospreay), two regular PROGRESS main eventers making their WCPW debuts (Havoc & Gibson) and WCPW’s ace in Martin Kirby.

The tournament on the right side in the above graphic is particularly strong. Scurll and Sabre Jr. have gone across the world both as teammates and opponents, and have a handful of critically acclaimed matches against each other. While sometimes I’d say their matches suffer from being overly long, here they’re facing off in a first round match so hopefully that shouldn’t be an issue and instead we’ll get a trimmed down and compact encounter. Both are booked strongly in WCPW, so that match is a real pick’em. I would have said that Sabre Jr. was more likely to pick up a win to bounce back from what would have almost certainly been a loss to Adam Cole for the ROH World Championship the night prior at their Bulletproof iPPV, but now that he’s lost that belt and their match will be non-championship both results are far more in doubt.

The other first round match in that block pits Zack Gibson against Jimmy Havoc, where both guys will be making their WCPW debuts. That makes this one another one that’s super hard to call, as we don’t have a feel for how strongly either guy will be booked in the promotion. The match should be really good though, if for nothing more than the crowd reactions; Gibson is a heat machine whenever he ventures outside of Liverpool and Havoc is one of the most popular guys of the UK scene. Whichever of the four possible combinations of winners we get for the second round though we should be in for a treat.

While the left hand side tournament is definitely the weaker of the two, there’s certainly potential there too. Ospreay and Kirby have had several great matches together in WCPW already, with Ospreay currently 2-1 ahead in one on one encounters against the man in pink. I think Kirby will probably pick up the victory here to restore parity between the two, and move onto the next round.

We then get to our one possible stinker of the night, as Nick Aldis (TNA’s Magnus) is inexplicably booked against Rampage. Aldis does absolutely nothing for me; I just hope he goes down without too much fuss allowing Rampage to advance. Logic would suggest that’s the case too, as you wouldn’t want to beat Rampage in the first round with him less than two weeks away from his title shot in Orlando. I’m leaning towards Kirby managing to pick up the victory over him in the second round though, I don’t think he needs to advance through the tournament while being wrapped up in the title picture.

The England show also has two other matches announced alongside the six tournament matches that will take place, both of which look like the have potential to be great. Firstly, Drew Galloway will be defending his WCPW Championship against Ricochet, who in his last weekend over for WCPW defeated Travis Banks and Will Ospreay. The second match is a huge eight man tag, pitting the Prestige (Joe Hendry, Joe Coffey, Travis Banks and BT Gunn) against the Bullet Club (Cody Rhodes, Adam Cole and the Young Bucks). 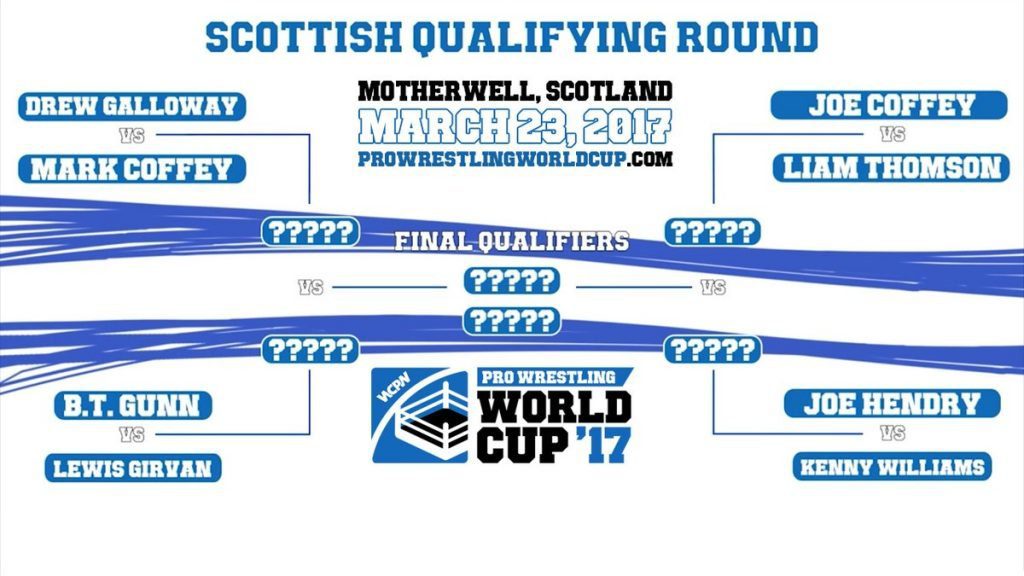 Two days later WCPW will be heading North for its second qualification show in Scotland. The clear pattern in this line up is that there’s four guys who are used regularly and pushed in WCPW (three Prestige members and the Champion Drew Galloway), and they’re all matched up with Scots who are either making their debuts or used very infrequently. In theory, this makes the first round a lot more predictable.

In the tournament on the left I think we’re almost guaranteed a BT Gunn vs. Drew Galloway final. Here I think we’ll see somewhat of an upset though, with Gunn advancing past Galloway, probably with the aid of some interference from other Prestige members. Similar to Rampage in the English tournament, I don’t think Galloway needs to advance while he has the title to occupy him, and since it appears the Prestige will be feuding with the champ this is a good way to give him a singles loss to a member of the group without him having to drop the belt.

On the other side things are a little harder to predict. When looked at in isolation it seems like both Joes have a comfortable first round win lined up for them. However, I don’t think they’ll want to have a Prestige vs. Prestige match so early into the factions time together so I think we’re in for a first round upset. I’m thinking it’ll be Williams who picks up the big victory here, which would make for a really nice stylistic second round clash between him and Coffey. Coffey will likely be coming off a loss to Drew Galloway for the WCPW championship earlier in the week at Bulletproof, so him advancing to the finals will help recoup him and give him something to do. Hendry meanwhile has a handful of other matches lined up, so seems the more logical choice to go out.

Match quality wise this tournament doesn’t have the great match potential of its English counterpart, but it shouldn’t be slept on. All eight men are at minimum good wrestlers so all six tournament matches should deliver to some degree and there might even e a few pleasant surprises.

Announced alongside the tournament for this show is an absolutely magnificent sounding triple threat main event. Matt Riddle will be making his WCPW debut to take on two of the UK’s finest in Will Ospreay and Marty Scurll. A must see match on paper for sure. 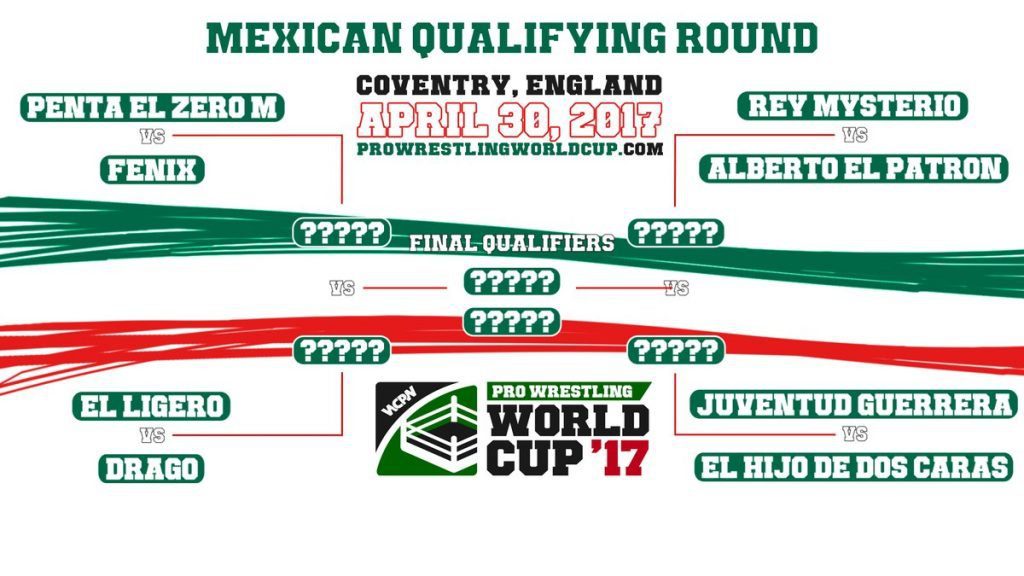 Just over a month later the third qualifying show will take place. Bizarrely, Mexico’s qualifier is going to be taking place in Coventry of all places. Out of the three announced World Cup shows this is by far the weakest looking on paper, but there should still be some stuff to enjoy.

The tournament on the left actually looks really good in fact. The brothers Penta El Zero M (fka Pentagon Jr/Dark from Lucha Underground and AAA if you’re out of the loop of Lucha politics) and Fenix always have great matches together, and El Ligero (who is definitely Mexican and not from Leeds at all) and Drago should have a very good match too. I think Penta probably advances through here, although Ligero is the regular so I wouldn’t be totally shocked to see him go through here.

It’s the other side of the bracket that looks horrible though. Mysterio in 2017 is well and truly done, and AEP does very little to excite me even if I was pleasantly suprised by how good his match with Kurt Angle earlier this year for the company was. Hopefully they keep things short, and you’d imagine Patron would advance to save Rey from having to pull double duty.

I’ll be blunt, El Hijo Del Dos Caras’ performance at True Destiny against Drago (a wrestler who I like) was one of the worst performances by a professional wrestler that I’ve ever seen. Ever. It was that bad. The one and only reason he’s getting booked is because he’s Alberto’s brother. Expect his match against Juventud to be an absolute trainwreck. Hopefully Juventud wins so we don’t have to see Caras twice, but either way I’m very confident that they’ll go on to lose to Patron who is booked very strongly in WCPW.

The only other thing announced for this show at this point is an appearance from Stu Bennett (fka WWE’s Wade Barrett). This, to my knowledge, will be Bennett’s first appearance at a wrestling show since leaving WWE.

It’s likely that more announcements will start coming relatively soon about the remaining five qualifying shows, as it has been announced that the finals will take place during the Summer so that only gives them a handful of months to play with. Overall though, the lineups for these first three shows look very promising. The WCPW Pro Wrestling World Cup was something I was somewhat skeptical of at first, but things seem to be coming together very nicely and they have my attention. At the very least, since all the content is going to be released completely free of charge, I would suggest keeping at least one eye on the tournament for cherry picking purposes.

The Importance of Lucha Libre in September (Part One)