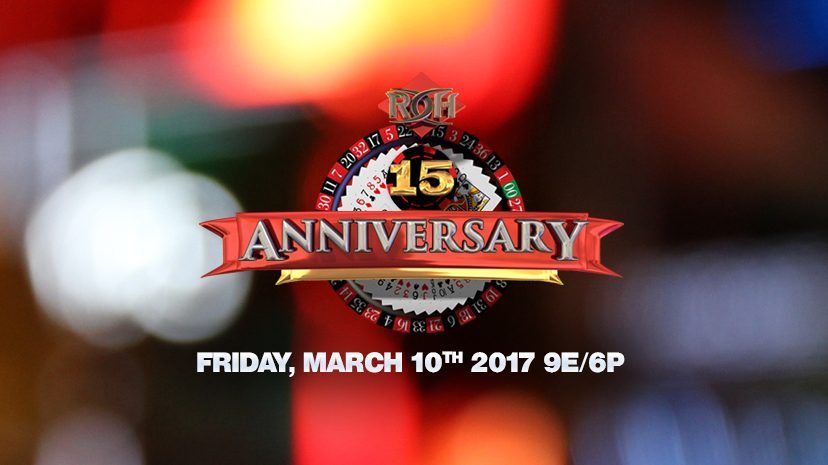 A couple of weeks after their actual anniversary, ROH comes to Las Vegas for the third straight year (the second straight year in Sam’s Town) to formally celebrate their anniversary. There have been a number of notable departures since ROH’s last appearance on PPV, as Kyle O’Reilly (who won the ROH World Title at Final Battle in December), Keith Lee, & Donovan Dijak have all left the promotion. They’ve also lost all three of their primary announcers, as Steve Corino & Nigel McGuinness have gone to WWE, while Kevin Kelly appears to be focusing a lot more on his announcing duties in New Japan.

In the wake of all the recent departures, ROH has put together a fascinating card for their first PPV of 2017. On paper, the card itself would certainly be appealing as a VOD live event, but as a PPV, it’s pretty hard to justify paying close to $50 to watch this on traditional PPV, even with the late additions of The Hardys & Bully Ray.

If you’re looking to watch this show, it’d be much cheaper to watch the show either through FITE TV, on your PlayStation 4 or on ROH’s website.

Christopher Daniels earned this title opportunity after winning the Decade of Excellence Tournament on ROH TV, where he scored victories over Mark Briscoe, Chris Sabin, and Jay Briscoe. They’ve actually done a pretty solid job in building up this title match, as you have an ROH legend going after the prize that’s alluded him for his entire career, for possibly the final time. Although it might speak to the company’s current issues with retaining younger talent, it is cool to see a guy who was famously in the main event of the first ROH show in 2002 challenging for the ROH World Title on the company’s 15th Anniversary Show. As far as the match itself is concerned, it has the chance to be really good. Cole & Daniels have met in singles competition on two previous occasions, and they delivered both times. Considering they’re in the main event of a PPV, I would expect that both will be looking to put on the best match possible.

The big question surrounding this match is the result. If you’ve been following the product over the last two months, everything would seem indicate that Christopher Daniels finally captures the ROH World Title here. He had to go through the Decade of Excellence Tournament to show that he still had the ability to be viable title challenger, while Adam Cole never seemed to take him seriously as a contender to his ROH World Title. Then, you had Frankie Kazarian turn on his best friend and longtime tag team partner to join The Bullet Club on a recent episode of ROH TV, seemingly stacking the odds even more against Daniels. While I’m sure it would be a very cool moment for a lot of longtime ROH fans to see “The Fallen Angel” win the ROH World Title, I don’t know if that’s the right move for the long-term future of the company. With all of the talent ROH has lost in the last year, and the talent they could be losing in the next few months, they really need to focus on building new stars to lead the company into the future. While I know he might not be the most popular choice, Dalton Castle could be that guy. He has a shot at the ROH World Title on April 1st in Lakeland, Florida during WrestleMania Weekend, and if the decision were mine, I would have Castle win the title from Cole, and then build him as one of the top guys in the company. Of course, that scenario potentially coming to pass all hinges on Cole beating Daniels here in Las Vegas, and right now, that’s far from a certainly. I’m going to go with Adam Cole retaining, but I’m fully prepared to be wrong. Prediction: Adam Cole

This was originally scheduled to be Roppongi Vice challenging The Young Bucks in a Las Vegas Street Fight (based on Roppongi Vice beating The Young Bucks at Wrestle Kingdom 11), but The Broken Hardys winning the titles in an impromptu match at Manhattan Mayhem VI last weekend changed those plans. Honestly, out of everything on this card, I might be looking forward to this particular match the most. Given the stipulation, I’m sure this would’ve been wild and crazy with just The Young Bucks & Roppongi Vice, but with The Broken Hardys (who have promised to bring tables, ladders, and chairs) thrust into the mix, it’ll probably be even crazier. It seems obligatory at this point for ROH to have at least one hardcore stipulation match (of some kind) on every PPV, and I really don’t mind that. It provides some variety to the card, and these type of matches always seem to deliver in ROH. Even if you’re someone that’s not into these kinds of hardcore brawls, I’m sure it’ll still manage to be entertaining, considering the teams involved. Since they just won the titles last week, I can’t see The Broken Hardys losing here, since they’re going to be facing The Young Bucks in a rematch on April 1st in Lakeland, Florida. The result is predictable, but this will be a ton of fun. Prediction: The Broken Hardys

Lio Rush earned this title shot after he defeated Scurll in a 2/3 Falls Proving Ground Match at a show in Columbus, Ohio on February 12th. It seems a little backwards that a non-title gimmick match would lead to a traditional one-on-one title match, but regardless, it was still a big moment for Lio Rush to get a win over an international star like Marty Scurll. This has the chance to be one of the best matches of the night. For Lio Rush, this is the biggest match he’s ever had on ROH PPV, so you know he’ll be looking to put on the best performance he possibly can. As for Marty Scurll, he’s quietly had a strong run thus far with the ROH World TV Title. He defended the title in a thrilling triple threat match against Dragon Lee & Will Ospreay at Final Battle, had entertaining title bouts against Juice Robinson & Sonjay Dutt, and successfully retained his title against Donovan Dijak in a fantastic match on a recent episode of ROH TV (a match that is currently my ROH MOTY for 2017). With regards to the result, I see Marty Scurll retaining here, as I don’t think it’s the right time for him to lose the title. While it would be really cool to see Lio Rush win the ROH World TV Title, I can’t see him winning, as he’s (unfortunately) yet another name that’s been floated around as potentially departing the company in the next few months. Prediction: Marty Scurll

While they’re an incredibly entertaining act, I don’t understand why Dalton Castle & The Boys are getting a shot at these titles. Back in February, they lost a trios match against The Rebellion on ROH TV, and then a week or two later, The Boys lost a handicap match to Colt Cabana. This trio has done nothing to deserve a shot against The Kingdom, but I guess they were the best option available for this particular show. The only real build we’ve gotten for this match was a whacky video on YouTube where The Boys went after The Kingdom in a very cartoonish manner. It was one of the most ridiculous segments ROH has ever produced:

This will probably end up being the worst match on the card, but I don’t necessarily think it’ll be bad. As I already mentioned, Dalton Castle & The Boys are entertaining, and it’s cool to see that The Boys actually getting something to do in the ring. As for The Kingdom, I’m sure they’ll be totally inoffensive here, though I feel like they’re in a weird spot at the moment. Ever since Matt Taven resurrected The Kingdom last fall, the unit has a number of solidly good matches, but nothing better than that. They’ve been a fine act in the mid-card, but they had yet to really have that standout match as a group. Obviously this match won’t be that, but it’s something to keep an eye out for as we continue through 2017. As for the result, I fully expect The Kingdom to retain their titles. Prediction: The Kingdom

There really isn’t any story behind this encounter. Both men are top singles competitors, and it was alluded to that the winner would potentially receive a shot at the ROH World Title or the ROH World TV Title at some point down the line. I don’t think this will be the best match of the night, but I’m sure it’ll be a really good one. These two guys are so great that there’s no way this won’t deliver. The big think to look out for here is the result, and since Bobby Fish is another guy that has an uncertain future with ROH, I would think that Jay Lethal emerges victorious, and earns himself another title opportunity. Prediction: Jay Lethal

This is a match that’s changed multiple times over the last few weeks. Originally, this was going to be The Briscoes vs. The Killer Elite Squad, but that match fell apart when Lance Archer was sidelined with a herniated disk in his back, which required surgery. The Briscoes then issues an open challenge, and that was initially answered by War Machine (neither match had been officially announced by ROH). With the debut of Bully Ray at Manhattan Mayhem VI, and the news that Davey Boy Smith Jr. was still looking to wrestle on this card, they were both thrown into the mix, resulting in this match being match. It’s a completely random six-man tag, to say the least, but I think it has the potential to be really good. All six participants are known for being really tough guys, so I can see this turning a hard-hitting affair pretty quickly. It’s awesome to see that Davey Boy Smith Jr. is still on this card, despite Lance Archer getting hurt. While Archer’s injury is certainly a negative, it opens the door for Davey Boy Smith Jr. to get more opportunities like this on his own, outside of KES. The Briscoes & War Machine always have really good matches together, so there’s nothing to worry about with regards to those two teams. I suppose the biggest question mark is Bully Ray. This is his first match in ROH, and I’m sure he’ll be looking to make an impression. While I’m still a little unsure of how he’ll do in a singles environment, I’m confident that he’ll do fine in a match like this. Since his debut was the biggest news item to come out of Manhattan Mayhem VI (aside from The Broken Hardys winning the ROH World Tag Team Titles), I imagine that Bully Ray, along with The Briscoes, will get the win in this six-man tag team encounter. Prediction: The Briscoes & Bully Ray

As of now, this is only a six-match card, but I wouldn’t be shocked if another few matches get added to the show, since there a number of talents (The Motor City Machine Guns, Jay White, The Rebellion, Colt Cabana, other members of The Bullet Club) that don’t have anything announced. 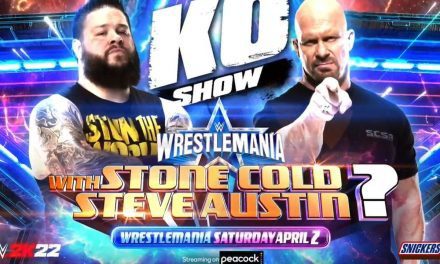 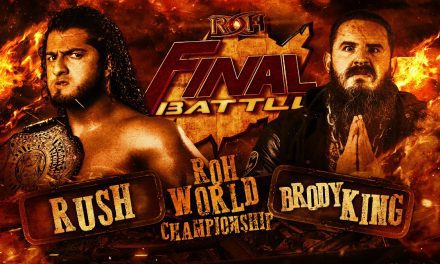 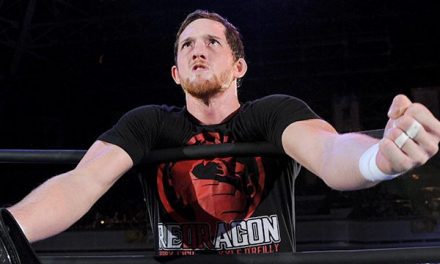