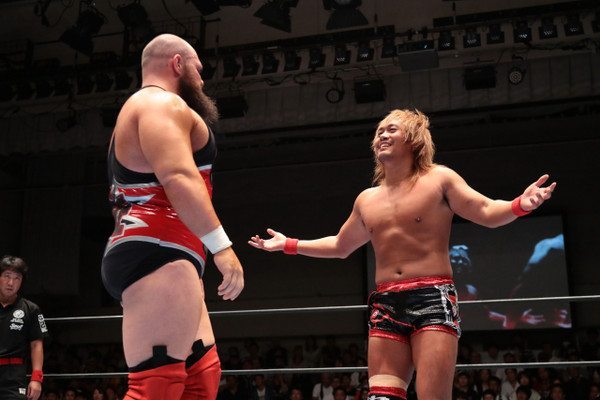 While February wasn’t the all-time great month we saw in January, it held up its end of the bargain, keeping up the momentum of 2017.

Before we begin: you will notice a lack of NOAH matches on here. On the Match of the Month subforum, we were unable to agree on which NOAH matches deserved to be included, but you should really just go and watch all of the February 14 and February 18 both shows. There are multiple good matches on each show, so many in fact, the votes were split, leaving them off our overall list.

Now, let’s delve into February, shall we?

I am not a CZW guy. My wrestling fan friends are not CZW people. I don’t usually enjoy this company. But, I can’t deny, this match was awesome.

Both men displayed incredible fire throughout and the title vs title stakes really elevated the importance of the contest. There was an obvious strong style influence in this match, as well as submission wrestling and grappling. Really good stuff.

Kyoko Kimura’s scheduled retirement match featured perhaps the greatest trios team ever assembled in the form of her opposition. Kyoko went into battle with her husband and daughter (from another marriage) and it was truly a pleasure to watch. Ok sure, Hana’s not very good yet. Her strikes are outright bad. But that played into the story. You would think in a match that is 67% women that Minoru Suzuki wouldn’t be the person in for his team most of the time. You’d be wrong.

Now, I know intergender wrestling has been a topic of heavy debate and discussion. All I will say is that in this match, it worked. Minoru Suzuki is an equal opportunity bully, and that’s what he did. The story was that neither Kyoko nor Hana were able to stop Suzuki, but also that Isao (Kyoko’s husband) wasn’t necessarily too much for Aja Kong or Meiko Satomura to handle. The family had to use superior teamwork to stand a chance, as when they were split up, they were decimated. I loved this.

You might’ve noticed my sly use of the term “scheduled” earlier. Kyoko had a bonus match against her daughter shortly after this on the same show. That was truly her final match. Here’s to you, Kyoko.

This was so much fun.

Ring Kampf, presented earlier as heels in Progress, became de facto babyfaces against the dastardly and unlikable SPPT. Travis Banks is going to be a world beater, mark my words. He was great here. Watching Big Daddy Walter destroy these men with strikes and slams was such a blast I felt like I could watch that for an hour. Axel Dieter Jr., part Zack Sabre Jr. and part John Cena, was vicious in this match too and it really worked. Ring Kampf were basically the grumpy veterans stretching and beating down the immature SPPT (which is funny because Banks is older than both members of Ring Kampf).

This match was also able to blend action and comedy together so well, almost like a great Jackie Chan movie. I’m talking his Hong Kong stuff too, not like his vanilla Hollywood trash. Jackie Chan tangents aside, SPPT really knows how to implement comedic spots into their match without making it a farce. This is not always easy to do and makes them very entertaining heels in that way. Real fun match.

This match was the definition of a coming out party.

Young Takehiro Yamemura was made in this match. Going toe to toe with the young hoss that is Big R Shimizu (and potential future ace of this company, in my view), for a 20 minute draw not only showed all he could do in the ring, but established him as a credible threat in Dragon Gate’s midcard. Dragon Gate has the best young talent in all of wrestling right now, and I know that because Big R Shimizu, the veteran of this match, is 24 years old. And he was given the “make this kid look good” spot, and oh boy did he deliver. If you aren’t watching Dragon Gate, now would be an excellent time to start. They have a dozen guys 25 and under whom can all go and have huge upsides one way or another. This wasn’t a crazy spotfest as DG has been known to produce; this was a nuanced storytelling match. And it was terrific.

While I had some issues with this match (namely the final leg hold which seemed to go on forever), I can’t deny the brilliant spots where this match peaked. Okada’s selling was top notch, Suzuki was great as usual, and the drama was tangibly thick. Suzuki’s barrage of violence towards Okada and his leg were as breathtaking as they were cringe inducing. I watched this with my girlfriend, who’s seen maybe 20 pro wrestling matches in her whole life (all of them with me), and at certain points in the match she would shield her eyes and say, “I don’t like when he does that.” And then Suzuki would go and beat up Gedo for no reason and the cynical smark in me would dissipate and I would hate Suzuki as much as she did. Not to mention we got our first look at “Puro Slaps Okada”. We’ve never seen that before, as he usually relies on forearms and uppercuts. The man continues to evolve. And, surprise, another Okada match with an excellent finishing stretch.

Okada is the man.

This was an excellent car crash match.

Cavernario and Volador Jr are probably my two favorite flyers in CMLL. And Ultimo Guerrero has always on been point in the bigger matches I’ve seen him in. This was a tag tournament final and it delivered the way you’d hope a final would. There was superb flying, great counter flying, and dudes taking sick bumps on the floor. They let it all hang out here and it lit the crowd on fire.

Well, if I couldn’t love Kento Miyahara anymore, man was he able to over deliver for us in this main event.
This was very much akin to your Okada/Tanahashi vs. Bad Luck Fale match, where the beloved Japanese Ace workhorse with the good hair and physique and threaded eyebrows had to overcome the monstrous powerhouse who is kind of mediocre in the ring. Not to take anything away from Bodyguard, the man brought his A game to Osaka.

This match followed Miyahara’s traditional structure, but down the stretch it made for a lot of fun and dramatic sequences. Hot near falls are a staple of big time main events and this had that in spades. This was an excellent performance by both men.

Was this the greatest chamber match of all time? It would stand to reason as it was the first one AJ Styles was in, and I don’t know if you’ve noticed, but that guy’s really good. This was also the best chamber we’ve ever had, with the sleek new design and safer dimensions. This was booked pretty much perfectly.

Every character did exactly what they would do, and Miz standing in his pod reacting to the carnage around him was the best thing he did in the match. Bray beating both Cena and Styles clean with his move in the middle is how you establish a man as a champion.

This was excellent and a perfect example of how you can use gimmick matches to tell compelling stories with the right talent and booking.

I felt several times during this match that there should be a scroll on the bottom of the screen, warning kids not to try any of this at home. If you followed this rivalry in Mexico and all over the world you knew these guys were prone to killing each other and themselves. Here, on perhaps their grandest stage, they did all of that and more. I’m not usually one to say that a wrestler “did too much”, because I feel if wrestlers are doing a lot, it’s to educate us as fans that this is where the bar is at now for human physicality and its limits. That being said, if you removed the three most dangerous spots from this match, it would still be the most insane spotfest match of the year. I’d be lying if I told you I didn’t enjoy every minute of it.

I couldn’t believe that these two were able to top their previous encounters. This match elevated both performers in my eyes, and I can’t see how anyone watching this could feel differently. Tetsuya Naito had been called a wrestling genius before but I never really saw that until this match. This match was laid out so perfectly.

If you watch their G1 match and their first title match, those matches were not wrestled as if to leave stuff on the table for later matches. Those were both main events and they were worked as such. So for them to be able to demonstrably top those two excellent bouts was no easy task, and they absolutely did. These two have a uniquely compelling chemistry as watching Naito bump around for Elgin’s hoss offense is as fun to watch as Naito sprinting around trying to outmaneuver Elgin with speed and cunning. Big Mike’s strikes, in particular, looked so good in this match. And Naito is quickly turning the Destino into the new Rainmaker, and by that I mean not only does he have so many variations of it, but he is also constantly finding new and unexpected ways to hit it. He can seemingly use it out of anywhere now. That move may get my vote as best wrestling maneuver this year.

A ton of hot near falls down the stretch. Including one sequence where Elgin hit 3 Elgin bomb variants; to the apron, to the barricade and in the ring, that had me jumping out of my chair thinking it had to be over. Watching this I felt like Naito watched the Okada/Omega match and all of the praise it got and said to himself, “Oh yeah? I’ll show you guys”. With more performances like this he will truly live up to the moniker of “wrestling genius”.