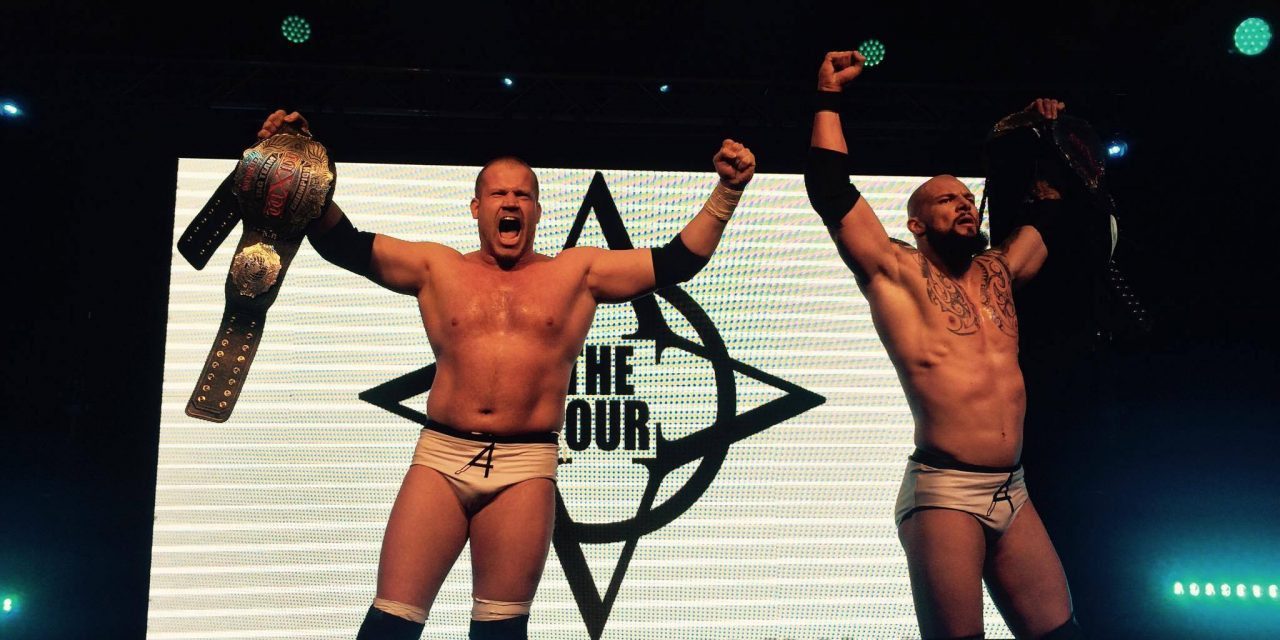 The big main event of tonight’s show is David Starr and Jurn Simmons trying to oust Christian Michael Jakobi from power in wXw. The company handily recorded an English language version of their video package. They’re getting quite good at making the promotion more accessible to mass audiences. They’ve added subtitles to German language promos for the English feed too. Commentary comes from Rico Bushido. Another bonus of the determination to reach the biggest audience possible; an English version that comes out as quickly as the German one.

The tag champs are used to playing underdogs, especially Al-Ani who usually takes heat, but here the CCK boys bump around for the champs. It’s a fine way to help establish the champions as strong top guys while also debuting the concept of CCK and what they’re about. They use double teaming and cheating but the timing on Travis’ stuff is amazing. Brookes tells an interesting narrative by going after Andy as he’s the elder statesman and CCK look to take his knee. This allows Al-Ani to showcase his talents with a fiery hot tag. CCK are incredible when you consider how little they’ve teamed together. You can see why the likes of Rev Pro are queuing up to use them as a team. Both are well regarded for tag work but this is probably the best team either of them are a part of, which is saying quite a lot. It’s like they’ve been teaming together forever. The double teams are wonderfully well thought out. The only major flaw is that occasionally Andy has trouble keeping up but even that plays into the story Brookes is trying to tell about Andy’s seniority. A4 retain by murdering poor Travis and Brookes again delivers on the storytelling by coming up short on a save. Great work all round in a hot opener. ***3/4

wXw are doing excellent work in putting together promo tape, like WWE, so if this is your first wXw show you have a frame of reference for these matches. The Cerberus angle is starting to collapse with Dragunov having left the group and other members having issues. Dreissker remains the ace of the stable and Bones is one of wXw’s top guys. They’ve been using him to re-establish Dreissker. The Avalanche beat Klinger in London but Bones thinks that in Hamburg, Bad Bones City, he’ll have the edge. His preparation has been hindered by a snowboarding accident, giving him an ‘out’ if Dreissker wins again. This is a healthy slice of Big Lads wrestling. Klinger is perhaps not at his best, struggling to overcome injury, but the effect is minimal. Dirty Dragan is the X-Factor, coming out to support Dreissker, but in doing so causing a distraction and Bad Bones gets the win! **1/2

Post Match: Bones goes to celebrate with the fans and Dreissker mashes Dragan for his insolence. The Cerberus implosion has created some bizarre goings-on. Who will be babyfaces coming out of this?

This came about because Sitoci claimed to be the best Dutch wrestler.

Dante, who’s also Dutch, is here to prove otherwise. A nice simple little story. This is Dante’s big comeback angle after time away after Sumerian Death Squad ended their wXw run. Dante’s biggest problem in this match is following two other Big Lads and delivering a less aggressive display. The only explanation is that Sitoci is less threatening. It’s Sitoci who has to force Dante to take him seriously by dismantling the arm. Of course Dante famously doesn’t use his left arm at all so it won’t effect Dante’s offence. Sitoci impresses with his own aggression, knowing he has to drive the contest. The whole thing takes a shocking turn when Sitoci beats Dante with the Snapmare Driver. Dante took a wicked bump from it and the whole contest showed why Sitoci is getting the push and the wins right now. He’s looking good. **3/4

This has turned into a fantastic feud. Marius turned on Kevin Roadster, now known as “Alpha Kevin”, and teamed with Alpha Female to ruin the Alpha Lovers wedding. Then Mel Gray got destroyed in a cage match in brutal fashion. The result is this Intergender Street Fight. Eventually Marius must get his comeuppance. Is tonight the night? They certainly tease that being the case as they have done throughout the angle. Normal service is swiftly resumed. The match doesn’t quite have the intensity of the cage match but the historical aspect helps. Marius does take a thrashing off Mel and is choked with his own belt. Given the beatings the faces have suffered it’s not sufficient. Especially as the very next spot is Marius tossing a chair in Mel’s face. Marius takes his licks though, being superplexed onto chairs and speared through a table. It’s a brutal match. Marius runs away to avoid further punishment. Mel gets a measure of revenge by hitting a senton on Alpha Female, with chairs, to score the pinfall. However Marius’ cowardice suggests there’s at least one more match in this feud. Unless Marius now faces Alpha Female. ***1/2

It’s a tough ask for these two to follow that carnage.

The flaws in both guys work are immediately evident too. While they both have talent the flaws are pretty obvious. The waistlock switches are borderline embarrassing. It must look like a struggle. It does not. It’s annoying because they do other switches that look great. Da Mack is one of those guys that can do flashy stuff but struggles with basics. As if he’s just waiting to get his better shit in. Gunns is a sleazeball who smokes on his way to the ring. Pretty sure you can’t do that, mate. While Mack’s issues relate to specific strengths Gunns’ issues stem from flaws that he should have cleaned up as a five-year pro. Bobby takes an awkward shot under the eye and gets busted hardway. “Nicotine is oozing from the forehead” says Rico, causing me to chuckle. What makes Gunns so frustrating is that occasionally he looks fantastic. His counter of a Stunner into an armbar is sensational stuff but while he’s sometimes magnificent there are worrying holes in his game. Wrestling has reached an incredible global standard so flawed workers stand out even more these days. The match ends on a high with Bobby getting a flash pin for the win. The inconsistencies in this contest were too jarring for it to be considered a good match but there were moments where I enjoyed it so it wasn’t a total bust. **

Crazed babyface Ilja Dragunov is an interesting guy to watch. He’s basically the same character as his lunatic heel but he’s not surrounded by bastards. James made a name for himself in CZW but wXw taking a shine to you is always a good sign for your career. He’s a solid contrast to the wacky Dragunov. There’s not a lot of sizzle from Alex but there’s plenty of meat. It’s handy to have guys like Alex James who will grind away in the midcard and make people look good. The wrestling business will always, always, need talent like that. He’s entirely convincing in bossing Dragunov, even if there’s a sense he has no shot at actually winning. Dragunov’s strongstyle forearms are a major highlight but he also barrels into James with a spinning uppercut for the pin. This was absolutely rock solid, a huge contrast to the previous match. Perhaps it was lacking in genuine high spots but I’ve no complaints about the standard of the work or the outcome. ***

Post Match: Robert Dreissker shows up. They square off but don’t touch and Rico suggests they should have a match at 16 Carat.

There are issues with wXw and the authority figures. Essentially they have two figures; one babyface, one heel. It’s the heel who has his power on the line here. Ringkampf have problems beyond that as WALTER wants into 16 Carat and Axel is the champion. They are in a situation where WALTER could win 16 Carat and challenge Axel for the title. Simmons is top contender for the wXw title and Starr is Shotgun champion. They want Jakobi out so he stops making unfair matches for the faces. The match structure here is intriguing with the Big Lads squaring off and Dieter-Starr pairing off. Two very strong matches contained within a tag. Despite Simmons, Axel and WALTER being wXw’s three top talents it’s Starr who stands out. Perhaps aware he needs to raise his game. wXw do lengthy main event tags extremely well. It’s been a staple of their intermediate shows for ages. The trouble with running as many shows as wXw do is that you can’t have the big title matches on every show. Like with WWE, you have to find other solutions and the big tag contest is a wXw favourite. Adding in the ongoing Jakobi storyline gives it extra edge.

Jurn Simmons has grown into the top spot in wXw. They possibly erred in putting the title on him as soon as they did but ever since the Speedball match he’s become wXw’s biggest asset. Close behind are the Ringkampf boys. WALTER is one of the best big men in the world and Dieter has effortlessly adjusted to his heel status and wXw championship throne. The storyline includes CMJ running in to try and save his spot only for Karsten Beck to take him out. This progresses to CMJ pulling Tassilo Yung out of the ring to save his job and Karsten going after him again. It gives the boys a chance to rest a little and shows the importance of the match in the big scheme of things. A subtle little hidden gem is that Starr goes after WALTER right after that, selling the importance of 16 Carat as they’ll be facing in the tournament. Starr needs to show he can beat WALTER ahead of 16 Carat. He also hangs with Dieter and survives his submission finisher. Starr has a main event turn and the crowd love him for it. This could be the making of him as a player in wXw. Starr shows a tonne of fire but eventually WALTER nails him with a lariat and a powerbomb so Jakobi retains his position. Great finish to the evening and exceptional work from wXw in building storylines and creating a new main eventer in David Starr. ****1/4

This was a decent go-home show for 16 Carat, which is wXw’s biggest show of the year (over three days). The main event was a glimpse into wXw’s main storylines; CMJ vs. Karsten, Ringkampf’s potential issues, Starr’s rise up the card and Jurn’s title match with ADJ. The card also did a solid job of promoting some individual talents and showcased some strong feuds that wXw has been building. There is no other promotion in the world, bar WWE, that keep the focus on their storylines like wXw. Every show feels like a logical progression but they also do a good job of keeping everyone up to speed with video packages if you miss the smaller shows. WXWNOW has been a big success story and the speed they released this show, both in German and in English, showed they’re serious about being a global player in the wrestling wars. The variety and depth of their online content is unrivalled among independent promotions. 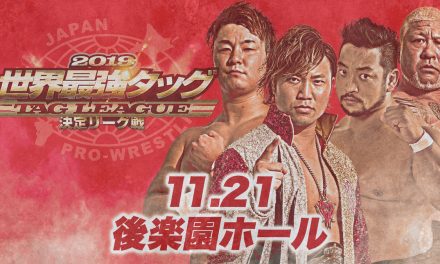