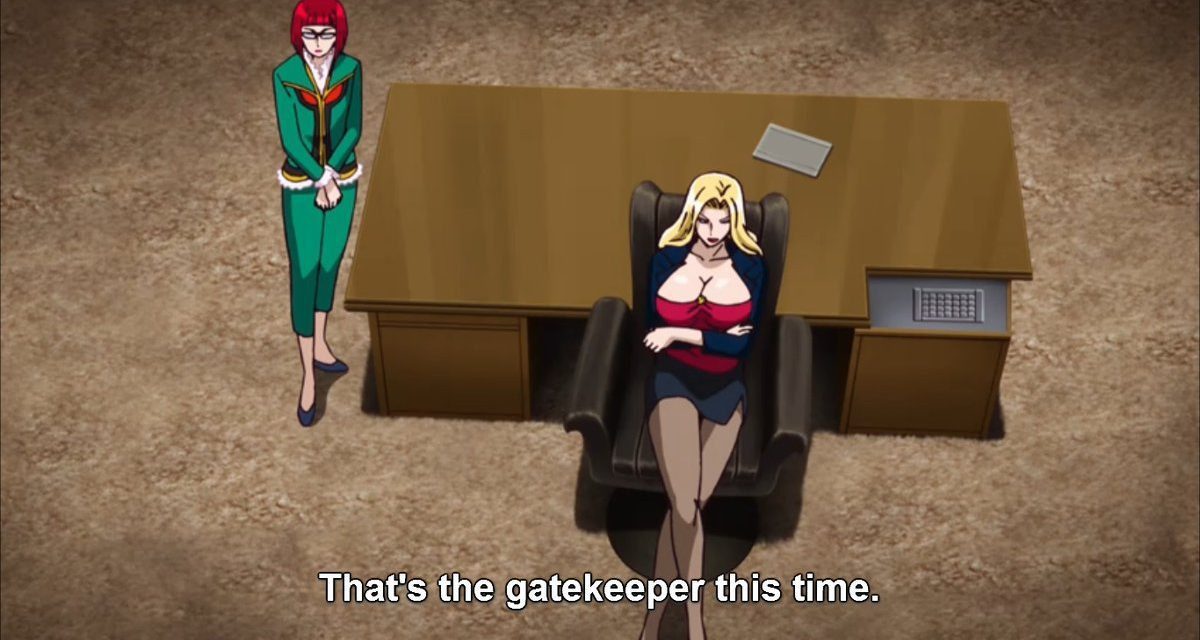 It’s been a very long week waiting for the conclusion of Hell in the Hole, but it’s finally here! The brutal match continues here and, unlike last week, the episode doesn’t really focus on anything else. Does Takuma survive the match? Read on to find out! You can watch every episode of Tiger Mask W over at Crunchyroll and if you want to find the rest of my recaps, you can do that here.

Before I get into the meat of this episode, I feel like I should bring this up. The animation in this episode is not very good. I don’t know if it’s always been bad and I just haven’t noticed it, but this week really felt like a step down. There were plenty of moments where the shot would hang on a still image instead of animating something and there was quite a bit of reused animation from last week. I understand doing it for the sake of recap, but the opening of this episode was a bit much. This episode is the midpoint in the first season and I’m a bit worried about the quality of the animation going forward. Hopefully they’re just saving the budget so they can go nuts near the finale.

Like I said earlier, the episode begins with a recap of last week’s brutal eliminations from Hell in the Hole. Five wrestlers remain in the match; Takuma, Kevin, Odin, Billy the Kidman, and Red Death Mask. When we last saw our heroes, Takuma and Kevin were facing off against the more experienced tag team of Odin and Billy the Kidman while Red Death Mask watched from a distance. Billy and Odin had the upper hand in this fight by quite a wide margin, using their practiced teamwork to cut off Takuma and Kevin at every opportunity. The rich gamblers watch gleefully as Billy the Kidman tries to crush Takuma’s skull with a headbutt. Billy goes for a second one, but he’s stopped when Kevin wraps the rope he received last week around Billy’s neck and starts to choke him out. Takuma takes an opening and locks in a sleeper hold on Odin.

Just when things start to look good for the team of youngsters, Billy and Odin find a way out of their predicament by once again working together. The two teams face off, ready to clash again, until they’re interrupted by Red Death Mask. The imposing villain makes an offer; the first wrestler to leave their partner behind and join him will earn the table that he won last week (along with his chair). Odin jumps at the offer, but his true plan is to double-cross RDM. Before he can do that, Red Death Mask whacks him with the table as though it were a chair, sending Odin flying down the mountain, ultimately crashing into a huge rock.

The three remaining wrestlers charge at Red Death Mask in a unified attack. Billy the Kidman reaches him first and gets the table broken over his head as a prize. Billy’s hard head protects him from the blow, allowing him to propel his body to headbutt RDM in the chest as though he were a harpoon. Takuma soccer kicks Red Death Mask in the head and Billy uses half of the table to smash RDM’s face in. Kevin comes from out of nowhere and slams Red Death Mask’s chair into Billy’s face. Knowing that wasn’t enough to finish him off, Takuma and Kevin lift up Billy and slam him headfirst into the hard ground with a double brainbuster. Just like that, the five survivors were cut down to two. The drones drop two boxes for the young team. Instead of getting weapons, the two are given water and protein powder to help them prepare for their final test. After a brief rest, the pair begins to ascend the mountain, heading towards the gatekeeper that awaits them.

Farther down the mountain, Odin dreams about laying in a wheat field back in his American hometown. After he wakes up, Odin drinks from a left behind water bottle and follows after his other opponents.

At no point did someone look at this and say "They might be a bit too big." #TigerMaskW pic.twitter.com/Uv5aMhEVHY

The Battle with Blackout

Kevin and Takuma find their final battlefield directly in front of the lodge where all of the rich gamblers have been watching the event. Standing in the ring waiting for the two men is an imposing figure known as Blackout. This guy looks a lot like Super Shredder era Kevin Nash. To the right of the ring is the exit to Hell in the Hole, a door that is locked and only Blackout has the key. As the wealthy people look on, this resembles more of a gladiator fight than a wrestling match.

The bell rings and Takuma hits a dropkick right out of the gate, which unfortunately has no effect on Blackout. Kevin attempts to smash Blackout with the chair from earlier, but Blackout catches it like it’s nothing, lifting it and Kevin into the air with ease. Blackout flings Kevin across the ring and then destroys the chair with his bare hands. Nothing that these two attempt seems to do any damage to their giant foe. The pair even resort to kicking Blackout in the dick, but nothing can take the giant down.

When there's no rules, no one's balls are safe. #TigerMaskW pic.twitter.com/c4MnepdevD

The way that Blackout moves doesn’t seem natural and there’s a good reason for it. Blackout isn’t a wrestler at all, he’s actually a robot soldier developed by a company owned by one of the rich men watching the match. Hell in the Hole isn’t just a fight for the freedom of the wrestlers, it’s a test run for the robot. This revelation doesn’t extinguish the fires of hope in Takuma and Kevin as they keep fighting. Blackout goes for a huge punch, but Takuma dodges it and beautifully applies a flying armbar. In any other match, this would have been huge, but pain doesn’t matter to the robot. He flings off Takuma with ease.

tfw you and your friends laugh at the plight of the proletariat #TigerMaskW pic.twitter.com/xWcQD2CRCC

It’s at this point that I can’t help, but see some Marxist undertones in this episode. Takuma and Kevin represent the proletariat, the lower class, while the rich gamblers are the bourgeoisie. They aren’t even a representation, this is just what they are. What we’re watching is a conflict between the higher and lower classes of society. Takuma and Kevin are literally fighting for their freedom against a physical manifestation of wealth in the form of Blackout. For the bourgeoisie, this is just entertainment, but for Takuma and Kevin, it’s a fight for their lives.

This theme isn’t only present here. Early in the show, there’s a short scene where Naoto visits his trainer, Daisuke Fujii, in the hospital. They talk a bit about Fujii’s former nurse and Naoto’s current crush, Ruriko. Fujii explains that Ruriko doesn’t have to work a day in her life because of how rich her family is. This causes Naoto to have a bit of a crisis when he remembers how much he bragged about having money on their date earlier in the day, which suddenly makes him feel like he isn’t good enough for her. Ruriko clearly doesn’t seem to care about the money, but regardless of this, Naoto is blinded by the bright glow of cash. It doesn’t help things that Fujii tells Naoto that a pro wrestler would never do for Ruriko. Naoto believes that he could never be accepted by the bourgeoisie.

While Naoto is fast to despair, the same can’t be said for Takuma and Kevin, who continue to fight even as their rich audience laughs at them. Blackout mercilessly wails on his opponents until they’re barely able to move anymore. The robot begins to choke them to death until it is interrupted by Odin slamming a table into its head. While Blackout is trying to regain its footing, Odin quickly grabs the key to the exit door from around its neck. Before he can really celebrate, Odin is grabbed by Blackout, who starts to crush him with a bearhug. Kevin and Takuma save Odin by lifting Blackout up by his legs and throwing him out of the ring. Blackout once again grabs Odin and starts to crush him, but this time Odin escapes by using the fireball throwing device he won last week. Flames engulf the head of Blackout, burning off a lot of his artificial skin, leaving him looking like a Terminator.


Kevin and Takuma spring off the top rope and hit double dropkicks to the back of Blackout, sending him staggering through the huge window that separates the rich audience from the action. Blackout’s targeting system goes haywire, causing him to see his masters as the enemy. The proletariat has turned the creation of the rich against them. As Blackout kills his creator with a wild swing, I have to assume that this will be the last Hell in the Hole that these members of the bourgeoisie will attend. In this small act of social revolution, Takuma, Kevin, and Odin not only escaped with their lives, but may have saved lives in the future by turning this event into a disaster.

As the three young wrestlers escape, back in the lodge, The Third dispatches the robot with ease. This man will surely prove to be a problem for Naoto in the future.

Hours later, Takuma and Kevin ride on the GWM jet towards their next destination. The two men are beaten and battered, but they’re already going to be wrestling on a show. The venue is Madison Square Garden, showing that although they were punished, these two have moved up the pecking order in the company after this ordeal. Absent from the plane is Odin, who gets off of a bus somewhere by a huge wheat field. Instead of going back to work, Odin chose to go home. Odin left behind the world of glory and money. He left behind his life as Odin. Henry decided that life is more important. That people are more important. That Catherine was more important. 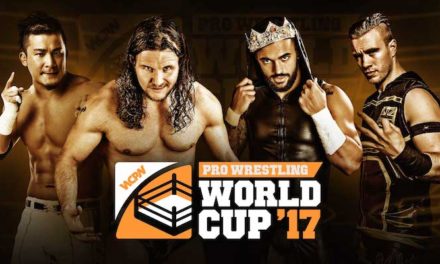