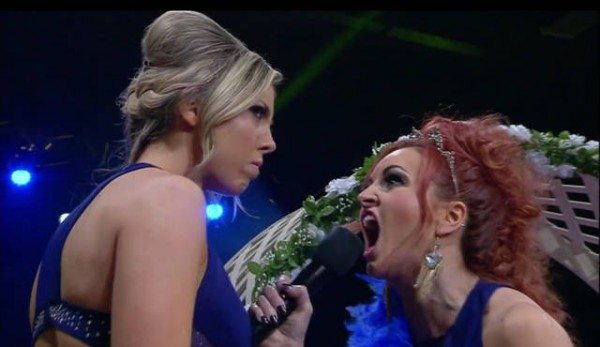 Cody (Rhodes) made his return to TNA for the first time since October (where he was beaten down by Bobby Lashley, something that has looks to be completely dropped – Cody addressed it in a way that appeared to dismiss the dispute). Cody called Moose out to thank him for helping Brandi the last few weeks. Cody was already doing his supervillain voice before Moose arrived – foreshadowing what was to come. Cody became rather upset when he learned that Brandi had Moose’s number. Cody called Moose a slut, which was delightful. Cody kicked Moose in the nuts and dropped him with the Cross Rhodes. I was really hoping we wouldn’t get heel Cody in TNA – his mannerisms are painfully broad. He’s not just playing to the rafters, he’s playing to people two miles outside the building. No nuance, no subtlety – he comes across as hammy more than anything else. Plus after the Richards turn, the Everett turn, the Tyrus half turn and flip flop, the full Rex turn – another turn lessens the impact of the most important of those (Richards) and continues TNA’s trend of being overly heel heavy.


Drake wanted Tyrus to lie down for him, tried a Finger Poke of Doom to no avail, punched Hebner in the face and finally offered a raise to Tyrus so he’d stand down. Any momentum Drake was picking up in recent months has been lost with this Tyrus nonsense.

Jade came to the ring with an offer for Knockouts champion Rosemary. This is Jade’s first appearance since their excellent Monster’s Ball appearance last month. Jade said after all Rosemary threw at her, she’s still standing. Jade challenged Rosemary to one final title match in a Last Knockout Standing match. Rosemary, in her quest to eliminate Jade completely, accepted.

The DCC is a mess. Godderz taking the fight to them should elevate him but because of how poorly the DCC has been presented to date, he’s basically just beating geeks – further driving the nail into the coffin of the DCC as a credible act. And Godderz isn’t just beating them, he’s outsmarting them one on three. Godderz was good here, better than last week, but there’s only so much you can do in four minutes. **

TNA has a Broken Hardys problem (and not just that the current tag team champions have yet to sign new deals). Ever since The Great War in October they’ve been devoid of any substance, they remain undeniably entertaining but they lack the fundamental character beats that made The Final Deletion such a success. I’ve had a similar reaction to them since Apocalypto, they are amusing but no longer essential. Without the underlying characters and relationships growing and changing and evolving it descends into schtick, enjoyable as they have been. And schtick by itself will never sustain.


Matt Hardy transported to Egypt and reemerged as the King of Gold. The highlight of this was Jeff briefly believing his brother had been turned into a boat. They then teleported to ASW Wrestling to claim another set of belts. Jeff rolled a man down a flight of stairs in a dumpster before they picked up the win after a Swanton. Matt and Jeff then teleported away. I must commend TNA’s teleportation effect by the way – simple, yet effective. *1/2


This was a weird match. Barnett sold a little to Bad Bones (who was making his first Impact appearance in three years, having last been seen losing to Samoa Joe in the build up to Lockdown 2013) which was a baffling decision. Elements of Barnett’s striking and grappling didn’t exactly look impressive. Then he dropped Bad Bones with a nasty powerbomb, which was a lot more like how this match should have been presented. He should have absolutely killed Bad Bones, as this was they would have been better off saving Barnett for debuting in the title match next week. This didn’t exactly achieve its purpose of making Barnett look imposing. Barnett submitted Bad Bones with a kimura. *


This was every TV X-Division match ever. Enjoyable though. They nicely played into DJZ’s existing leg injury too. Lee retained with a roll up after Shane Helms interfered. Afterwards Lee attacked DJZ until Andrew Everett made the save and nailed Lee with a Shooting Star. Everett looked fantastic in the post match. TNA better use the likes of him, Lee and DJZ before they lose them like they did Mark Andrews. **3/4

Before we get to the big main event wedding, how about a brief whistle stop tour of TNA weddings first?

This one was between Laurel Van Ness and Braxton Sutter. Sutter and Allie are in love but Maria has been blackmailing Sutter into marrying Laurel to mess with Allie. Mike Bennett was the best man, but he was very drunk. The Lady Squad served as the bridesmaids. Rockstar Spud (and Aron Rex) served as the flower guy. The crowd were fiercely against the union of Sutter and Van Ness, a testament to how strong their connection to Allie is and how well written she’s been. As it turns Maria was threatening to fire Allie if Sutter didn’t marry Van Ness. Sutter finally declined and declared his love for Allie. Allie then quit. A brawl broke out, Van Ness had a mental breakdown and hit the bottle before Allie and Braxton finally kissed in the middle of the ring – a super sweet moment.

This was all absolutely tremendous. Everybody’s performance was top notch. Sutter’s jaw dropped when he saw Allie and he was resolute in his declaration of love for Allie. Maria was fantastic as the evil force pulling all the strings only for her plan to collapse at the final hurdle. Laurel was excellent, particularly when Sutter said I don’t and she was sitting amidst the chaos getting plastered. And of course every facet of Allie’s performance was on point, quietly stewing and displaying every necessary emotion before she finally exploded. Plus a special mention to the crowd, who were super into this. And of course it all served a love story between Sutter and Allie, and wrestling doesn’t tell enough wrestling stories. This was superb stuff. 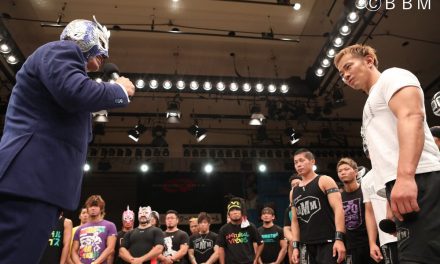 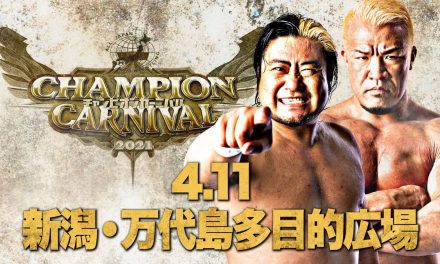