I saw Tracy Smothers live for the first time in 1993. I was a seven-year-old kid growing up in eastern Kentucky, and we were in the market for Smoky Mountain Wrestling’s television. I was hooked. That year, Smoky Mountain came three times to the gymnasium at Fleming-Neon High School. There is one moment, at one show, that I remember vividly. The wrestlers were out to meet the fans and sign autographs. I made a beeline for my favorite, Tracy Smothers. I don’t remember what item I had, or why I did this, but I specifically asked him to sign it, “Wild-Eyed Southern Boy.” I don’t know if he didn’t hear me, didn’t care, or just thought I was referring to him by his nickname, but he simply signed his name. I was too starstruck to make a second request. Smothers’ gimmick in Smoky Mountain was, essentially, Confederate sympathizer. He sometimes wore a Confederate soldier uniform. He had the battle flag on his trunks and often wore a Confederate bandana around his neck. In the Smoky Mountain territory—parts of Tennessee, Kentucky, Virginia, West Virginia, and North Carolina—that made him a beloved babyface. I didn’t find anything about it odd at the time. By 1993, my father had returned from his deployment during the first Gulf War. He was the kind of guy who would own numerous items of Confederate flag memorabilia. At some point, I ended up with my own Confederate flag bandana. And for reasons unimaginable to me now, I loved it. I’m not sure if he gave it to me, or if I wore it in hopes it would endear me to him, but I know I carried it with some misplaced pride. I remember the last time I ever wore it: I visited my dad and stepmother in Tazewell, Virginia. When it was time to pack my things to go back to my mother’s house, I realized I didn’t have the bandana. I ran around the yard and through the neighborhood trying to see if I’d dropped it. I never found it.

As the years went on, wrestling never gave up its penchant for racism. There was a subtle change, however: wrestling’s racism became less overt. Society, even that part that made up the wrestling world, deemed it less acceptable for the Confederate sympathizer to be the beloved babyface. The change in me was less subtle. I can’t point to a moment, but by high school, I shared my disgust openly for the Confederate sympathizers around me: the football players with the decal on their pickup truck, the provocateurs who doodled it in their notebook, and certainly anyone who would wear it on a t-shirt.

I stopped watching wrestling. I didn’t swear it off; it just stopped being a priority. My politics drifted leftward and my views sharpened on racial and social justice. By the time I came back to wrestling, America had elected a black man as its President. I was under no illusion that President Obama’s election signaled that the country had overcome its racist foundations; I saw, regularly, enough racist comments, hatred, and violence, to never let me think that. And yet, it felt like progress.

Wrestling had experienced its own progress. Gone, mostly, were the meatheads who’d gone from driving pickup trucks to high schools like mine to college football to the latest incarnation of WWE developmental. The wrestlers themselves were a new breed: they appeared to be more thoughtful than the performers of my youth. Unsurprisingly, even with my relatively long absence, Tracy Smothers was still working. Somewhat surprisingly, though, his gimmick hadn’t been sent to the dustbin of a less tolerant history. In fact, many of these newer, more thoughtful wrestlers seemed to embrace him. There is the famous picture of Shinsuke Nakamura and Bryan Danielson in the New Japan LA Dojo, Danielson grinning in a Tracy Smothers t-shirt. Colt Cabana welcomed Smothers on to his podcast, but never asked a question about the Confederate imagery. He was a wrestling legend and that was enough.

Twenty-three years later, I went to see Tracy Smothers again.  My wife, Sarah, and I got out of the car and walked toward the gymnasium. I saw a man walking toward the venue from another direction with a Confederate flag on his shirt. My brain scrambled for words. I knew Tracy Smothers was on the show that night. Honestly, he was part of the reason I bought tickets. I tried to think of something to say to Sarah about the shirt. It felt like it deserved comment. Nothing came. Instead, I lowered my head, tried to justify this man’s shirt to myself, and handed my ticket to the woman at the door.


It was still warm outside then. That made it terribly hot, and somewhat uncomfortable, in the gymnasium. It was no less uncomfortable that 10-15 fans had on the same shirt as the guy I saw outside: bright red, the stars and bars screen-printed crudely on the front. There were a few black wrestlers on the show. There were a couple of black fans in the audience. I wondered if they felt uncomfortable. Before the first match, a clichéd heel manager tried to get heat by parroting then-candidate Donald Trump’s talking points on immigration. Even in southern Indiana, just across the river from Kentucky, it didn’t elicit any reaction at all. But, looking back, maybe they knew something I didn’t. 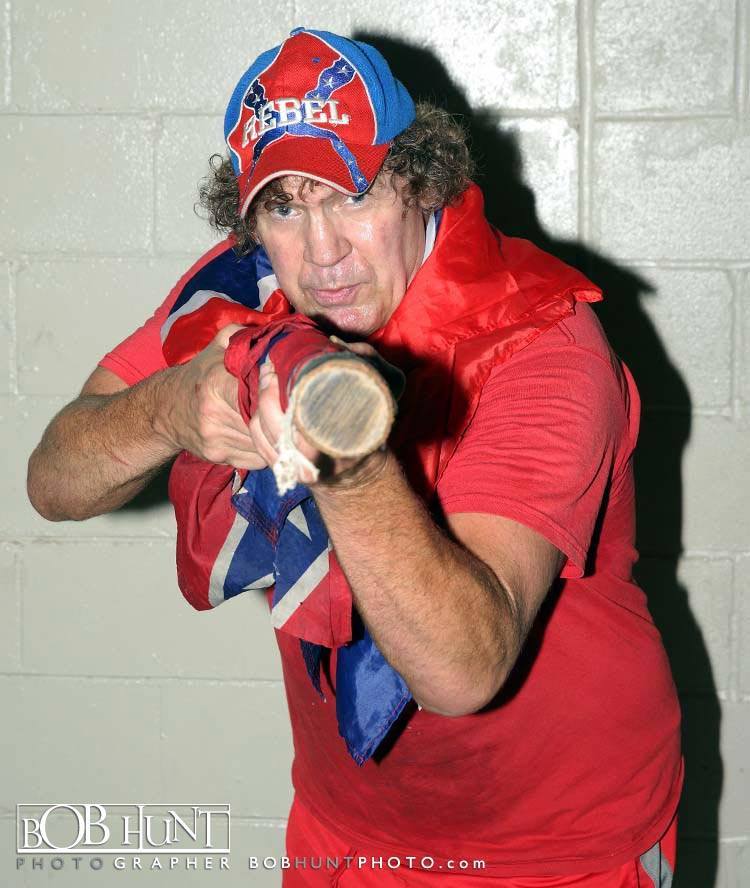 Eventually, Tracy Smothers emerged from the makeshift curtain. He was carrying a Confederate flag. By this point, I felt pretty awkward about the whole situation, but I stood and I clapped. I applauded a man who has given much of his life to the sport I love. I applauded the spectacle that grabbed the seven-year-old me and, despite life’s attempts to distract me, never let me go. And even writing that makes me feel the way I did when I couldn’t form the words as my wife and I entered the building. I feel like a coward. I feel like a coward because I bought a ticket, because I stood up and applauded, and because I never said how wrong it all was.

Why didn’t I? It’s easy to say that Tracy is an old man who grew up in a different era, or that Tracy is well known for that persona and time having passed him by should not mean he can’t make a living. The uncomfortable explanation is I’m a white guy who doesn’t have to bear the burdens of that flag, of what it says. I can be a man who wore that flag as a kid, and never have to explain myself. I can revere Tracy Smothers, the wrestler, and never have to grapple with what my mere presence in that gymnasium said to those who saw me there.

The weather turned cold. Against all odds, I spent large parts of November thinking about Tracy Smothers. I deliberated whether it was my uneasy privilege that let me shed my principles, or whether it was a less embarrassing, if more arrogant, justification: I thought Tracy and his battle flag-clad fans represented the last gasp of a moribund minority. I thought they were harmless. But, in the wake of Donald Trump’s election, that night in a sweltering gymnasium dotted with Confederate flags suddenly felt quite different.  It wasn’t the Lost Cause, after all; they knew something I didn’t.

Somewhere in America, a young child is falling in love with wrestling. She doesn’t know, or doesn’t grasp, the magnitude of what is going on in the world, but the timeless story of good prevailing ultimately over bad takes hold of her imagination. One day, she will have to decide for herself whether what is presented to her as good comports with her idea of good. She may find that her own idea of good is in conflict with the ideas of others, even those she sees at the same local wrestling show week after week. Then, she will have to decide whether to stand up for herself.

How Important Has Paul Heyman Been to the WWE?