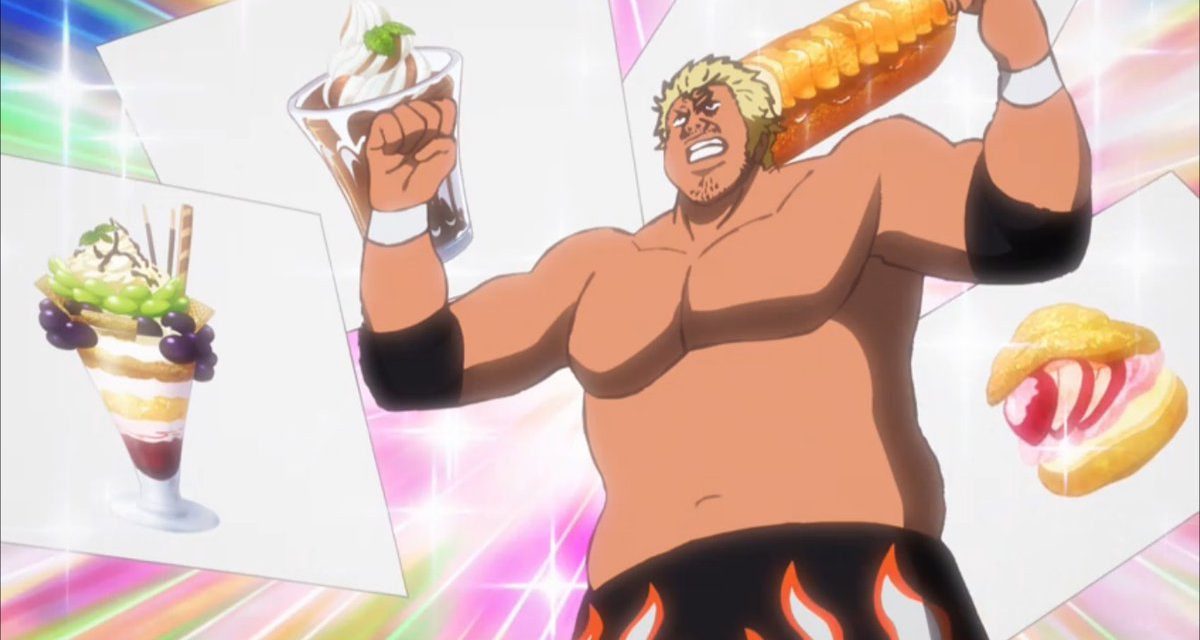 After last week’s awful episode, I was a little worried about what we were going to get this week. When we had an episode full of peeping old people and abusive mothers, I was ready to throw in the towel on this column. Thankfully, it was followed up by an episode that I have no problem calling delightful. Let’s sit back and talk about how much Makabe loves sweets. As always, you can watch this and every episode of Tiger Mask W over at Crunchyroll and if you want to find the rest of my recaps, you can do that here.

Episode 17 Recap: Don’t Be a Softy

For the second week in a row, we start the show on the New Japan tour bus. I can’t help, but think that Naoto is a jerk for riding on the bus while Haruna drives to the next show on her own in the Takaoka Motors truck. He later tells her that she didn’t need to come to this small show, but either way, it is super rude not to ride with her. We see a poster for the show the roster is riding to and the big promoted match is Tiger Mask teaming with GBH to take on a Bullet Club trio headed by Kenny Omega.

At the gimmick table, Haruna and Tiger Mask are putting out their merch when they see Tanahashi and Ryu Wakamatsu sneaking around and generally acting pretty shifty. Tiger asks them what they’re doing, but the two men declare that this is the chance and take off running. I’d like to believe that Tanahashi regularly has wacky adventures with the young lions. Yuji Nagata stumbles around near the table as well, asking Team Tiger if they’ve seen Makabe. When they say no, he takes off running in the same direction as Tanahashi and Ryu.

Finally Makabe arrives and asks Tiger and Haruna where everyone went. He says that he only found them and Honma, who tells the pair that he tried to run too. It’s worth noting that Honma looks notably less scary in this episode than he has in past appearances. He used to look like a goddamn monster, but now he just looks like a weird hotdog person. I was a little bummed that they didn’t get Honma to voice himself, but I figure he might not have been easy to understand.

Makabe asks our protagonists if they like sweets and next thing you know, the four of them are all headed out in the Takaoka Motors truck to go on a tour of local bakeries. While they’re in the car, Makabe complains that nobody wants to come with him on his sweets runs anymore. Haruna tells Makabe that she read his sweets blog and, little did I know, this is a real blog! If you ever wanted to see a bunch of pictures of Makabe with various foods, this is the blog for you.

Makabe and Haruna are kindred spirits. They both truly understand the love of sweets that the other has. The look, the taste, the smell; they’re all important aspects of the joy that can be derived from sweet treats. A wonderful desert is pure bliss for these two and they plan on eating until they burst.

At their first stop, Makabe talks up their famous strawberry shortcake, of which only fifty helpings are made a day. When they get inside, Makabe and Haruna are flabbergasted to discover that all of the servings were bought up by one customer. Makabe begins to fly into a rage and has to be held back from going on a rampage by Tiger Mask and Honma. The disappointed Makabe declares the group heads to the next shop in search of apple roll cakes. Unfortunately, the results are the same as the last; no sweets to be found. The same thing happens again at the next stop. This time the baker tells them that all of the tarts they were looking for were bought up by a group of foreigners. The same story plays out at each stop they make. Whoever these foreigners are, they sure are hungry. Honma advises that they give up their search to go prepare for their match and Makabe predictably calls him a moron and says that they have to press on.

When an attempt to eat a parfait is as successful as the other attempts to eat, the group hangs their heads in despair. Finally the three men that ruined Makabe’s day show themselves when they exit the bakery. Kenny Omega, Tama Tonga, and Bad Luck Fale have been eating all the sweets! Those villains!

It turns out that the Bullet Club trio was going around eating everything that was recommended by the Sweets Makabe blog in an effort to ruin Makabe’s day before they wrestle him tonight. Sounds like a solid strategy to me. Tama Tonga says that it was so good that they had to eat all of it. The voice actor they got for him is amazingly bad. I’d bet that Tama is about seventy years old based on his cartoon voice. The thick tension is cut by the pastry chef when he announces that the store has plenty of strawberry cream puffs left. Omega and Makabe throw themselves at the cream puffs, determined to be the first ones there.

Omega smashes Makabe out of the way with an elbow to the ribs and buys every single cream puff. This kicks off a minor street brawl between the six men. Tama Tonga latches himself to the downed Makabe’s back and holds him on the ground. Tiger Mask tries to help Makabe, but Fale cuts him off. Finally, Honma has had enough and flings himself at Omega for a diving Kokeshi rocket attack, but Omega sidesteps him. Then, as Tama Tonga forces Makabe to watch, Kenny Omega eats every single cream puff.

The Bullet Club leaves and Makabe swears revenge on them. He demands that they keep searching for sweets. If they give up, that means they lose.

Stare into the eyes of a broken man. #TigerMaskW pic.twitter.com/KhN3uhDVqq

As you can see above, the search for sweets was fruitless. By the time the group returned to the venue, Togi Makabe was a shell of himself. Tiger Mask tells Yuji Nagata that he’s this way because they looked at fourteen or fifteen different sweets shops, only to come up empty at every try. I don’t know about you, but fifteen sweets shops seems kind of absurd for what was earlier described as a rural town. Nagata asks if Makabe can wrestle, to which Makabe responds by leaping out of his chair, saying that he’ll rip apart the Bullet Club, and then slumping back down into his seat. Makabe was supposed to do an interview with a local TV show, but because of his current condition, Tiger Mask and Honma had to cover for him. I swear that the Honma voice actor made his voice rougher than it was before, implying to me that his voice might be partially gimmicked. Seems like an odd thing to do, but everything about this show is weird.

Talk show lady says it like it is when it comes to Honma. #TigerMaskW pic.twitter.com/qpg8ITLAZO

After the interview, the show host asks Tiger if Makabe will be wrestling in their match. When he says that he probably will be, the host gets very excited, saying that she and the whole crew are huge fans of his. Remember, Makabe is a big draw in Japan to the casual fan. It sounds like the show staff has a huge surprise planned for Makabe, but we’ll have to wait until bell time to see what it is.

When it comes to match time, Makabe still looks out of it and the jeering from Kenny Omega doesn’t make anything better. What does make it all better is the prize the winning team will receive. The local TV show sponsored the match and bought a bunch of things they’ve seen on Sweets Makabe to give to the winning team. This fills Makabe with a ton of fighting spirit and he declares that they have to win.

If any image perfectly sums up this episode of #TigerMaskW, it's this one. pic.twitter.com/3wF7knCbCU

The bell rings and Fale is slower than normal. Tiger Mask literally runs circles around the sluggish giant until he spinkicks him in the face. Fale goes flying back into the Bullet Club corner where he tags out. Fale tells Omega that he’s so slow because he ate too many sweets earlier in the day. It looks like the Bullet Club’s evil plan is beginning to backfire on them. Makabe demands that Tiger Mask tags him in. He needs to get his revenge. As Makabe and Omega step to the middle of the ring, Tiger Mask runs and knocks Tonga off the ring apron, while Honma dives through the ropes onto Fale on the outside. Makabe takes Omega’s head off with not one, but two brutal lariats, making him do a full flip with the second hit.

Tonga tries to get back into the ring, but Tiger Mask cuts him off by diving over the ropes and hitting a Metora through the guard rail. Honma remembers how his Kokeshi was dodged earlier, so he decided to make up for it here, hitting Omega with Kokeshi after Kokeshi. It’s no mistake that Honma specifically targets Omega’s stomach with the headbutts. Once he’s properly softened up, Makabe climbs to the top rope and finishes off Omega with the King Kong Knee to the stomach for the three count. Like any real multi man tag match, Makabe didn’t take a single bump. ***

This was the complete opposite of last week’s episode. If we’re going to get filler episodes, this is the kind of filler I want. Characters don’t need to be made up and inserted into the series for one off episodes because the New Japan roster has such a huge roster of guys that are already at their disposal. Seeing Makabe desperately track down pastries is exactly the kind of thing I wanted to see out of this series when it was first announced. Why make up bad guys when you have Kenny Omega around?

If you’re looking for the perfect episode to show a New Japan fan that hasn’t been following the series, this is it. There isn’t anything you need to know going into it and there’s a ton of fun stuff with the New Japan roster involved. I highly recommend watching this one.

In next week’s episode it looks like we’re seeing Haruna continue her journey to become a joshi star. Before I go, we have to talk about this:

Okada is challenging Tiger Mask W!?! Sign me up! I doubt we’ll actually get to see this match, but it seems very odd for Okada to mention it if nothing will ever come of it. Maybe we’ll get something fun to promote the show down the line or the match will take place in the show itself. Either way, I’m excited about the prospect of Tiger Mask facing off with Okada one-on-one. Who knows, maybe we’ll get it in both the cartoon and in real life?