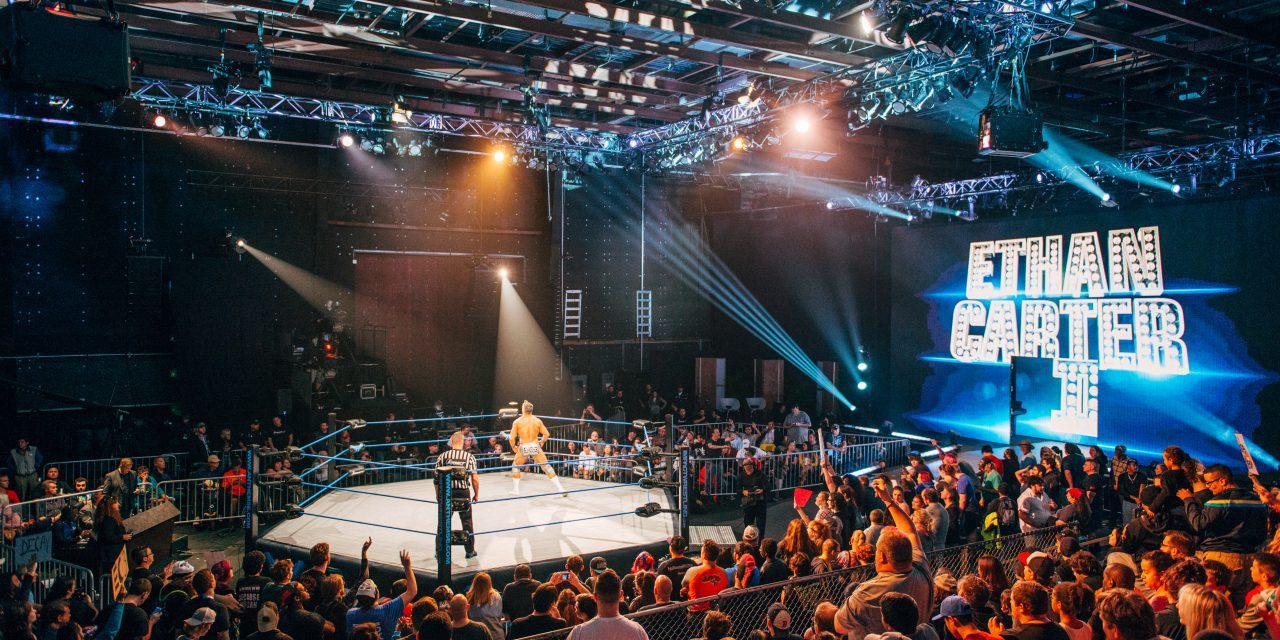 Jeff used his Open Fight Night case to challenge Lashley. Lashley had new music that is considerably worse than his old music. Matt reiterated his intent to face all the teams on earth before the match.  Jeff Hardy failed in a prior challenge to Lashley in an excellent match in July 2014. Lashley continued his habit from last week of absolutely murdering people with powerbombs, this time dropping Jeff on the steps. Injury has slowed Jeff a tad since the match these two had in 2014 but he’s still more than capable of delivering compelling singles efforts. Jeff missed a slingshot over the ropes but crashed and burned before Lashley put him down with the Spear. Basic but effective Jeff Hardy formula – Lashley controlled, Hardy fired back with a bit of madness, but that risk taking cost Jeff in the end. Eddie Edwards came out and demanded his rematch, Lashley agreed after berating Eddie and the fans for a while. ***1/2

I don’t have a problem with Maria being involved in the Knockouts division. She’s a strong performer and a commanding antagonist. That doesn’t mean however that everything in the division has to go through her. Maria pushed Brooke off the top rope allowing Sienna to hit the Silencer for the win. The match was fine interference aside. *3/4

Because Jeff Hardy had already wrestled, the DCC couldn’t use their Open Fight Night case to challenge for the World Tag Team titles (not that they’d need much of a reason for getting title shots, they got one just by asking last week). Steve hit a crossbody off of the stand. The rest was every plunder brawl ever – there were thumbtacks, barbed wire and beer bottles. Josh Mathews referred to a move James Storm has been doing in TNA since 2002 as innovative offense. Bram piledrove Steve off the apron through a table on the floor for the win. For it’s style, this was perfectly enjoyable for what it was but throwing matches like this out here for little real reason is what devalues them when they’re meant to actually mean something, say for Rosemary/Jade last week. ***

Moose wanted another title shot but Drew said he already had an opponent. Galloway flattened Ryzin with a pretty glorious big boot. Drew won by pinfall shortly after with a Future Shock in Round 1. *

I liked the booking here. Usually when a heel attacks a wrestler, leaving them injured, it’s pretty inexplicable when they’re rewarded for said actions with a title shot. But here Lee already had the right to a title match (using his Open Fight Night case), so this scenario was a little more smartly constructed than usual. Like most title reigns in TNA it doesn’t quite feel like DJZ achieved all he could as champion (a recurring problem in TNA – too often does the end of any particular reign feel like a moment, because most of them are executed so spottily in the weeks and months prior to the switch), and thus it doesn’t feel like quite as big a deal as it could that Lee has dethroned DJZ. DJZ couldn’t get anything going because of him bum leg, and Lee won to claim his second X-Division championship. Hopefully this reign is a little more notable than the first. This was an effective piece of storytelling at least. Lee should be one of TNA’s marquee talents right now. **1/2

This was the final Open Fight Night case match. EC3’s left side was heavily bruised. More story than match as Drake wailed on EC3 relentlessly before EC3 grabbed a fluke roll up. That didn’t do much for Drake. Drake and Tyrus attacked EC3 with a baseball bat before DCC showed up. Tyrus and Drake left EC3 to the wolves as he got obliterated by DCC, who then proceeded to drop Tyrus and Drake to close the show. *

Not without flaw, this was one of those perfectly enjoyable Impacts. Solid and sound yet unremarkable.