It’s an odd feeling to review an NXT show that seems to be lacking the buzz that the brand had last year. NXT in its current state seems betwixt and between, shedding the developmental roots but still without solid footing in terms of creating an individual and specific brand.

On some level, the past few NXT cards have come to represent the diminishing returns that can be inherent with dream match booking, as those shows all contained matches that were noteworthy but failed to sustain an audience for the weekly show and the subsequent Takeover specials. While we don’t know what is in store for this evening, there is buzz that any number of newly signed indie superstars could potentially debut and make an impact. This has been a tried and true tactic for NXT previously, and a new superstar showing up in front of a knowledgeable and large audience outside of the confines of Full Sail Arena could certainly go a long way towards making NXT once again the “it” brand. I’ll probably rub some the wrong way right off the bat with this scorching hot take, but I don’t really get the whole Tye Dillinger thing. I think it’s sort of like Bayley, in that the journey with the crowd and audience informs the reactions he currently gets and I don’t know if it will catch on or translate for an extended period of time. Not that this being his ceiling would be the worst thing! If NXT is going to be its own brand, it needs people like Dillinger, who can move up and down the card and be over no matter what.

That being said, I am always surprised by how crisp Dillinger looks with his offense. Execution isn’t something that is a deal breaker for me, but it is always a breath of fresh air when everything looks great.

The narrative of this is a little bizarre in the opening minutes, as Dillinger gets thrown outside and falls victim to interference, but then later rolls out of the ring to stall the offense of Eric Young, which seems like an odd inconsistency. All is forgiven when Dillinger busts out some swank left hands. Dillinger should watch some Lawler matches and just base everything around punching people.

The rest of the match is based around Dillinger desperately trying to take out the rest of Sanity, who continually pull Dillinger’s focus. He has a great nearfall but the referee is out of position, which allows Sanity to put Young’s foot on the bottom rope. When Dillinger continues to focus on taking out the members of the group at ringside, he skins the cat for to get back in the ring but ends up in perfect position for Eric Young’s wheelbarrow neckbreaker. This felt a bit contrived in the moment and Dillinger looked like a dummy throughout, but maybe that was the point. **1/2 Hot take number 2: No one in NXT would fit in on the main roster better than Almas. I think his physical charisma would allow him to really stand out going for a belt like the IC or US Championship. Roderick Strong is the absolute definition of a good hand. More than that, really.

The opening is an interesting contrast, as Almas tries to prove he is better with little mind games, while Strong does the same by making Cien work just that much harder, run the ropes a little faster than he wants, make him drop down an extra time. From there, Almas works the arm, which really makes sense because he desperately wants to stop the striking ability of Strong. Roddy takes over with a flurry of offense that reminds people how great a hot tag he was a few years ago.

Really, this match has been worked a lot like a lucha match, not necessarily in terms of the moves (it’s very strike heavy, and strikes are used a transitions and momentum changers) but in terms of the idea that these are two equal competitors that are searching for incremental advantages and could win with the slightest slip up. Everything is fought over, which makes the impact of all the successful moves really matter, and helped subvert expectations as they continually reversed and pushed for advantage. Eventually, Strong was able to fight out of the hammerlock DDT (overcoming the arm work from earlier) and hit the sick kick. The finish made a lot of sense and felt really natural. I hope they get another chance to do this again, I think a series between these two would really benefit both competitors. **** I really have no idea what to think about this match up. DIY is very great and the Authors of Pain are not quite there yet. That being said, the start of this match is really smartly put together. The authors have DIY well scouted, which a team with a manager should. That being said, DIY still have confidence in their own abilities and take over with lightning quickness.

As an aside, I love that Ellering has hand motions like a baseball manager to secretly tell the Authors of Pain what to do. It’s such a nice touch. Really, the best thing about this match is that it shows how much a non wrestler can add to a match, and how much help the role can be to creating a cohesive story.

Ciampa has a good hot tag, and the power spots, including two huge German Suplexes really get the crowd back involved after they got a little quiet during the AoP’s extended control sequence.

The AoP wrestle like Jason Vorhees and Michael Myers; slow and bumbling but moving forward constantly, showing an inhuman endurance and a homicidal fervor. Gargano and Ciampa get matching submissions, the same that won them the titles against The Revival, but AoP fight out. Even if they lose, they look like world beaters. Shortly after, the AoP counter the superkick/knee combo in to the super collider and the Last Chapter. This was a very well put together finishing stretch. This is not a great match, but it’s probably the best match the Authors of Pain can have right now, and they deserve credit for doing their best. *** Seth Rollins hit the ring and calls out HHH. Some local talent/security get beaten up. I think it’s smart to use Rollins to try and pump the crowd back up after the DIY loss. I like that Sanity’s theme sounds like an early 80s Swans song without vocals. More wrestling themes should be based around the New York no wave scene. I don’t really know Nikki Cross all that well, but she reminds me of Sami Callihan from a bunch of years ago when he was just this crazy ball of energy, running around and kicking barricades and biting things. I love it. Having energy can cover up a lot of faults.

Asuka is essentially tiny Asian Brock Lesnar in this, and Nikki cross is overmatched but fearless. If you’ll forgive a mixed metaphor, Royce and Kay are basically an ineffectual Team Rocket and the NXT Women’s Championship is Pikachu. Their plan appears sound, but you know it’s only a matter of time before they fuck up in preposterous fashion. Even their extended walk and brawl with Cross seems short sighted strategically, as it gives Asuka, already an unstoppable monster, a few minutes to recover. While they have a few moments on top, Asuka recovers and wins in pretty short order. This was pretty standard. *** Bobby Roode’s entrance reminds me of Let’s Make a Deal. Nakamura’s entrance allows me to keep my pokemon theme going, because it was clearly inspired by that episode where Pikachu gave all of a Japan a seizure. Nakamura reveals the title belt like a gangster showing someone he’s packing.

This is the first match of the evening that has an extended feeling out period, which on paper is probably to make it seem epic, but instead feels a bit slow. Perhaps I should be more forgiving, but I think the Strong/Almas match got across the same idea (taunts, mind games) in a much more truncated and efficient fashion.

Just as I type this, Nakamura takes an absolutely ridiculous bump and singlehandedly gives Roode something to focus on. I like Roode and he can be an intensely charismatic performer, but he can also work without purpose, but here, Roode’s strengths are accentuated, as the pace he is comfortable working at now looks deliberate and cunning.

I hate to focus on selling, because I generally think that Nakamura does a great job, especially while Roode is on offense. That being said, it’s a little frustrating that when Nakamura goes on offense in a match based around a neck injury, he is able to hit all of his offense with the same pace, pace, precision and flair. Even something as simple as pausing after the backwards roll prior to the knees in the corner would have been a nice accent and a good reminder for the audience.

I do love Roode playing possum and doing anything to avoid getting hit with the Kinshasa, although the moments in between were stretched out to the point that anticipation gave way to wondering if there was a mistake or miscommunication. It does make Roode look like a smart wrestlers, and when he finally gets hit with it, it happens on the apron and Nakamura was unable to really take advantage which is a nice pay off to the work he put in to avoid it. Even though Nakamura hits it again directly after, the damage to his knee was too severe and he was unable to make the cover. After an extended injury time out, Roode immediately hits the implant DDT for a nearfall, followed by a half crab on the injured knee. Albert/Matt Bloom runs down and does nothing and then Roode hits another implant DDT for the win. This was designed to keep Nakamura strong, but it was a total mess. Roode is stillborn as a champion.

I think people will probably like the final match more than me, and I would bet that it was probably a great live experience. I think it just had flaws that are major sticking points for me (inconsistent selling, poor use of negative space) that are not as important to other people. I look forward to people letting me know why they enjoyed it. **1/2 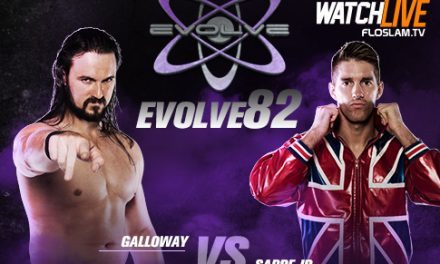