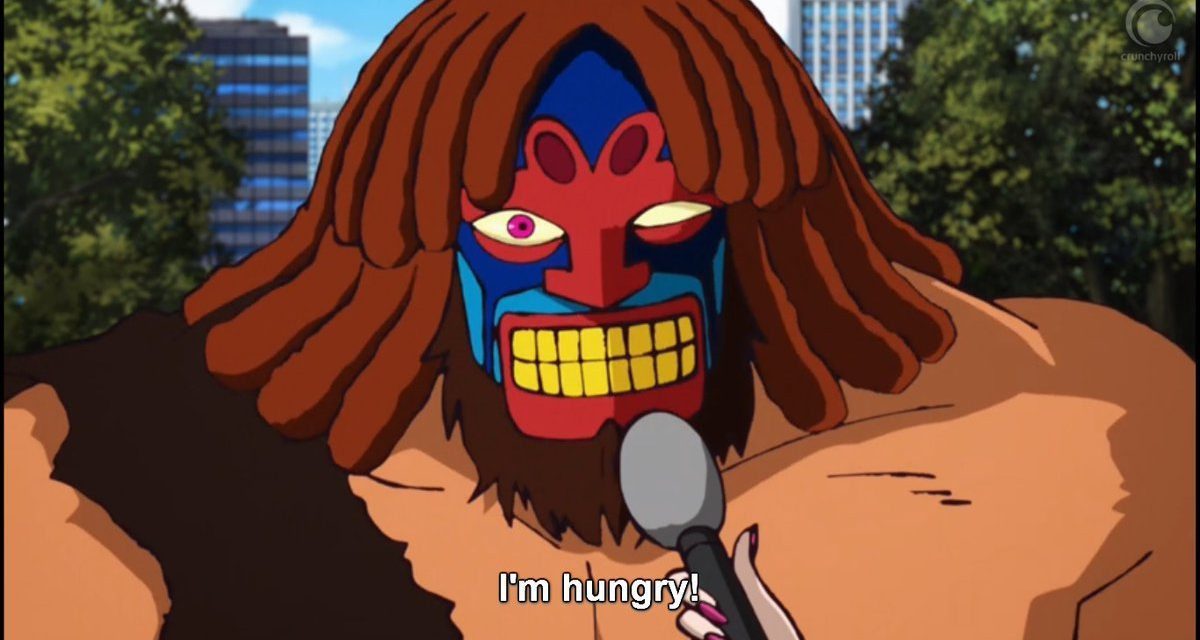 We’re back again with another thrilling episode of Tiger Mask W. This week we’ve got a joshi tag team match and a brutal Last Man Standing match ahead of us. More than anything, this episode is establishing the new status quo of the series with Tiger Mask as a member of the GWM roster. Let’s get right to the action! You can watch this and every episode of Tiger Mask W over at Crunchyroll and if you want to find the rest of my recaps, you can do that here.

It doesn’t take long before we’re presented with something strange this week. The show kicks off in the Max Dome with Miss X giving Ruriko a tour of her new workplace as a nurse for the wrestlers. She’s introduced to the rest of the medical staff and they sure seem like a bunch of disposable characters…. Except for one of them and his super distracting hair. I’m guessing that he’s a clown on the side? (We later see that he’s just balding, but man, it looked super weird here)

The last bit of advice that Miss X gives to Ruriko is quite simple; no romance with the boys. I wonder if Tiger Mask counts as one of the boys? Ruriko emerges from the nurse’s office in her new uniform and is immediately greeted by a big, sweaty man that’s telling her how cute she is and that they should grab lunch. Things don’t go any further than that as Miss X whips Mike and tells him to get back to training. Whipping your employees has to be against some kind of law, but Mike probably deserved it. Miss X’s phone goes off and she returns to her office for a video conference with Mister X. I don’t think I’ve ever specified in this column, but these two aren’t of any relation that we know of. Miss X and Mister X are just titles that high ranking officials of the Tiger’s Den hold.

Miss X reports to her boss that she convinced Tiger Mask to appear on the next GWM show and that advance ticket sales are already spiking. Don’t see it as anything other than a shot at WWE that the big American company in this show needed to steal a wrestler from New Japan in order to draw a decent house.

Ahead of their big upcoming event, Battle Invasion, GWM holds a press conference to make some big announcements. Emphasis on big.

Tiger Mask’s opponent is revealed as Mister Bigfoot (but you can just call him Bigfoot, Mister Bigfoot was his father), a gigantic monster of a man that weighs in at over 500 pounds and dresses like a cave person. The Japanese press is utterly shocked by his appearance, but someone else was amazed at the announcement of his finishing move.

Miss X is quick to point out that Bigfoot is the strongest and biggest masked wrestler in the world. Bigfoot is so strong that he knocks out all of his opponents in under five minutes, a very impressive statistic. The monster man tells Tiger Mask to watch what’s going to happen to him and then proceeds to bear hug a huge tree until it snaps in half. Following this display of power, Miss X announces that the match between Bigfoot and Tiger Mask will be held under Last Man Standing rules. While she needs him to draw a crowd, Miss X is more than okay with Tiger Mask being broken in half or being turned into ham as Bigfoot says he’s going to do. I’m not entirely sure if Bigfoot knows what ham is.

Five minutes and twenty seconds into this week’s show, we get our first appearance of Naoto as he’s watching the press conference with Haruna and her uncle, Kentaro. Haruna seems worried about Tiger’s chances against an opponent this big, but Naoto assures her that he’ll exploit Bigfoot’s limited technical wrestling skills and his lack of stamina to win the match. A wrestler this big is no different from the giant robot that Naoto wrestles for practice. It turns out that this robot has a name, Roussimoff. I believe this is the first time the practice robot has been officially named, but I could be wrong. Either way, Naoto and Kentaro head off to Mt. Fuji to train at their secret Tiger Mask base.

Back at the press conference, Miss X announces that the Becky Lynch and Charlotte analogs, Payne and Queen, have set aside their differences and formed a tag team to battle a team of joshi wrestlers called Candy Pair. The match will determine the very first GWM World Diva Tag Champions. While Candy Pair might appear to be cutesy cosplay girls, they talk trash with the best of them, getting Payne and Queen heated going into their match at Battle Invasion. Even though the boys left to go train, Haruna continued to watch the press event and is fired up over the women’s match coming up. We saw her working over a punching bag in the past and this week she’s trying to lift Naoto’s weights. She bites off a little more than she can chew and almost chokes herself out on the bench. Remember, always have a spotter while you lift weights.

On the day of the show, fans are lined up at the doors waiting to get in. Tickets are completely sold out and according to sales data, Tiger Mask can account for 73% of the fans coming in. The show opens with our old friend Fukuwara Mask taking on Mike Rodriguez aka the sweaty dude from before. The bell rings and some guy in the crowd is going nuts, loudly screaming out “MIKE-O! MIKE-O!”

Tiger Mask leaves his dressing room to go see how Ruriko is doing at her new job. He runs into her in the hallway and good lord does she swoon over him. Ruriko breaks company protocol and tells Tiger Mask that she’s rooting for him tonight, blushing the entire time. Sometime soon, Naoto is going to have to deal with the fact that Ruriko likes him more as Tiger Mask than as himself.

While Naoto is out looking for girls, Haruna is doing the same thing. She stops by the dressing room of Candy Pair to wish them luck in their match. At 19 years old, Haruna is amazed that Candy Pair are only a year older than her and have already achieved such a high spot as a tag team. Haruna asks if they’re wary of wrestling for GWM, to which the pair responds by saying that the company has a huge global platform and this is their chance to really break out. Honestly, it’s nice to see the Tiger Mask team take a balanced approach for once and show why a wrestler might want to take a chance working for GWM or WWE.

We join the match in progress and Payne obliterates Milk with a hard elbow strike. Milk attempts to get to her corner, but she’s dragged back to the middle of the ring by her hair and faces an onslaught of knees to the stomach by Payne. Even after all the punishment she’s taken, Milk refuses to stay down, showing a ton of fighting spirit. The crowd goes crazy for her, but Miss X doesn’t seem to understand why. Payne springs off the ropes and takes Milk’s head off with a lariat. The commentator makes the all-time great call of “That’s cool!” to really sell the moment to the fans. Mint attempts to run in to save her partner, but she’s neutralized by Queen with a Fisherman’s suplex. Payne gets the three count, scoring a decisive title win for herself and Queen.

Tiger Mask spends the early goings of the match dodging Bigfoot’s attacks and trying to chop him down with hard kicks to the legs. Bigfoot tries to corner Tiger Mask, but TM jumps to the top turnbuckle and nails Bigfoot with a missile dropkick to the face. The giant staggers back and Tiger follows up with a dropkick to the leg. The attack on the legs continues when Tiger Mask sweeps Bigfoot’s legs out from under him and then tries to lock in a kneebar while he’s down. Unfortunately, Bigfoot’s too large for Tiger Mask to apply the hold. Before he knows it, all of Bigfoot’s crushing weight is on top of him.

Tiger Mask tries to reach for the ropes, but Bigfoot transitions into a Full Nelson, while still putting as much weight on him as possible. At the commentary desk, Miss X reveals that Bigfoot has fantastic mat wrestling technique and stamina, he just never has to use them. Tiger Mask manages to drag the two wrestlers over a bit, allowing him to get his foot on the ropes. TM rolls to the outside to take a breather while Bigfoot yells at him to get back into the ring. Tiger Mask tells the referee to keep Bigfoot away from the ropes, which results in the ref screaming at Bigfoot like he’s a bad dog. Bigfoot repays this by picking up the referee and throwing him at Tiger Mask once he gets back into the ring.

The gigantic Bigfoot lifts up Tiger Mask by his head with one hand and delivers a devastating punch to the stomach. He follows that up with a chop to the back and a hip attack that sends Tiger Mask flying into the corner. This was not the type of match that Tiger was expecting. Bigfoot hits another hip attack in the corner AND THEN LOCKS IN THE BEAR HUG!!!!!!! Things aren’t looking good for Naoto here. He attempts to stiffen his back, but is met with a headbutt in response. Tiger Mask starts to fade, but it’s the concerned look on nurse Ruriko’s face at ringside that manages to wake him back up.

With two hard elbow strikes, Tiger is able to break the grip of Bigfoot. Tiger Mask beckons Bigfoot to charge at him, which Bigfoot is more than willing to oblige. The giant speeds toward Tiger Mask, who uses that momentum to overhead belly to belly suplex him out of the ring and into a piece of the rig that holds the lights over the ring. Bigfoot’s massive dome leave a huge dent in the pillar. Rather than make the ten count, the referee sees that Bigfoot is knocked out and calls for the bell immediately. The show closes as Stone Cold Tiger Mask tells Miss X McMahon to bring him someone stronger if she ever wants to beat him. ****

While I normally think that Last Man Standing matches are junk, this was actually really well paced. The show was benefited from having time constraints, making it so that we didn’t have to sit through ten count after ten count. There was actually a ton to like about this episode overall. The WWE vs. NJPW allusions were more than just one sided for once and the potential love triangle between Naoto, Tiger Mask, and Ruriko was fleshed out a bit more. And don’t forget that we’re starting to see more out of Haruna as a character other than being the plucky sidekick. While I’ve been enjoying the series up to this point, it really feels like Tiger Mask W is finding its footing, which was really underscored by the fact that there were no guest appearances by New Japan wrestlers. Tiger Mask and his supporting cast are able to stand on their own two legs and produce a quality show now.

Next week: The war between GWM and New Japan intensifies! 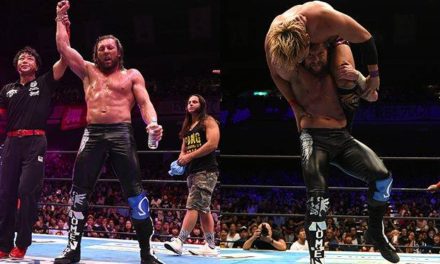