Tiger Mask is sporting some very cool gear with the colors of the Mexican Flag. It honestly looked refreshing compared to his usual look. Speaking of Tiger Mask, the match started with him going into an arm drag frenzy, delivering one to his opponents, all of his teammates, and even the referee. This was a pretty standard Eight-Man Tag. While it didn’t feature a ton of action there was several fun moments sprinkled throughout. It was about what I was expecting. Ephesto got the pin here on Blue Panther Jr. to win the match for his team, which did come as a surprise, since I was certain that Henare was going to lose the fall. Regardless, this was a short opening match that was fun for what it was. **1/4

Both of these men made a few appearances on Ring of Honor TV last year, so I knew a little bit about them coming into this match. This was a pretty good match. OKUMURA did get a fair amount of offense in, but this was mainly a Stuka Jr. showcase. I’ve only seen him twice, but Stuka Jr. has quickly become one of my favorite guys from CMLL. What’s amazing is that he moves so well for a guy of his size. My first thought when I saw him in ROH last year was “Isn’t he a little big/thick to be a luchador?”, but that notion gets dispelled quickly when you see him putting incredible dives and springboard moonsaults, like he did in this match. These two seemed to work well together, and it resulted in a very entertaining match. The only negative is that OKUMURA’s valet continuously got involved towards the end of the match, which led to Stuka Jr. giving her a few slams and a couple of top rope splashes. That stuff was odd, and took away from the match a little bit, but other than that, I had a lot of fun watching this one. ***1/4

Taguchi came out dressed in a pharaoh outfit, while KUSHIDA was wearing a weird silver robot head that seemed to resemble a watch. From start to finish, this was a really entertaining Six-Man Tag. You had so many fun moments throughout this match, from the exciting opening exchange between Ospreay & El Soberano Jr., to the more comedic moments from the likes of Cavernario and Taguchi (who took his pharaoh/mummy character way too seriously). Okada, Ospreay, & Cavernario were a very cool trio, and I hope this isn’t the last time we get to see them together in a Six-Man Tag. That being said, I thought El Soberano Jr. looked really good in this match. This was my first time seeing him, and he stood out in a big way. I don’t know much about CMLL, but I just have a feeling that he has a bright future. As for the match, the only real criticism I have is that it seemed like the finish came out of nowhere, but other than that, this was just a fun match to watch. ***1/2

Naito went after Milano Collection AT before the match, which might be the first time that Naito has actually attacked him during this little story they’ve had going on. As for the match itself, it predictably broke down into a brawl right from the start, and when the dust finally settled, the result was another fun multi-man tag. The match was filled with action, and everyone seemingly got a moment to shine. The main highlights of this particular match were interactions between Dragon Lee & Hiromu Takahashi. In the end, SANADA got the win for LIJ after getting Finlay (who had just been hit with a chair by EVIL behind the referee’s back) to tap out to the Skull End. While this was a good match, it was the one match on the show that (I would say) lacked that Fantastica Mania feel. You could’ve put this match on any regular “Road To….” show, and you wouldn’t have noticed the difference. ***1/4

While I had seen both Volador Jr. and Ultimo Guerrero before, I had never seen Euforia or (the new) Mistico before, so for me, it was an interesting mix of competitors. This was a really good tag team match, and might have been the best match on the entire show. Things did start off a little slowly, but once things got going, it turned into a really exciting match. Euforia & Ultimo Guerrero were very good in this match, but Mistico & Volador Jr. were definitely the standouts. They were both fantastic here, pulling off some incredible moves. The most spectacular moment came when Volador Jr. launched Mistico over one of the turnbuckles and to the floor into a hurricanrana on Euforia. That was truly amazing. Ultimately, Ultimo Guerrero got the win for his team after hitting a massive reverse superplex on Volador Jr. From start to finish, this was an incredibly entertaining match, and it made me want to see more of Mistico & Volador Jr. in the future. ***3/4

The last time we saw Rush in New Japan was in December, where he had a pretty disappointing run in the World Tag League as Tetsuya Naito’s partner. Despite the fact that this match involved two big names from CMLL, I had a feeling that this wasn’t going to be very good, given how old Atlantis is and Rush’s less-than-stellar showing in the World Tag League, and as it turned out, this match wasn’t that good. It wouldn’t call it a bad match, but it was far from the best match on the show. The match felt slow at times, and as a whole, just wasn’t that interesting. Atlantis had a few moments here and there, but for the most part, Rush dominated this match. I guess the only notable thing that happened here was that Atlantis got hit with a chair and then just started bleeding through his match. He must have gotten a pretty nasty cut, because he was bleeding so much that parts of his blue mask were literally turning red. If not for the mask, I’m sure he would’ve looked nasty. Rush ultimately did get the win, but only after interference from both BUSHI (who distracted the referee) & Tetsuya Naito (who kicked Atlantis low). It says a lot about Rush when it took interference from his LIJ stablemates to be a bloody and weaken Atlantis. To put it simply, this was not very good. **1/4

Hechicero is another guy who made a few appearances on Ring of Honor TV toward the end of last year, so I was familiar with him going into this match. This is my first time seeing Maximo Sexy, who came into this match as the champion, and he has an interesting character, to say the least. Even though this was far from being the best match on the show, this was a pretty solid main event. I thought that it was very similar to the Stuka Jr. vs. OKUMURA match from earlier in the show, in terms of how it played out. Hechicero, like OKUMURA, looked good (I would say Hechicero had the better performance of the two), but ultimately it was Maximo Sexy (with, ironically enough, Stuka Jr. in his corner) who was the standout. He’s a guy who’s actually has a lot in common with Stuka Jr., in the sense that you don’t think much of him at first glance, but then when you actually watch him in action, he blows you away. Maximo Sexy is a big guy, and the fact he can pull off some of things he does is incredible. Again, this wasn’t a spectacular main event, but from start to finish, this was a good match. We did get a referee bump in this match, as Red Shoes got taken out by Maximo Sexy after he unintentionally kissed him twice on the lips. Normally I would complain about referee bumps, but this one was pretty funny, so I’ll let it slide. Maximo Sexy eventually scored the victory over Hechicero to retain his title. ***1/4

As a whole, the best stuff on this show occurred in the middle of the card. The Euforia/Ultimo Guerrero vs. Mistico/Volador Jr. tag team match was easily the best match of the night, and well worth checking out. The Stuka Jr./OKUMURA match, the trios match with Cavernario, the ten-man tag with LIJ, and the main event were all very solid matches in their own right. The opener was fine for what it was, and the Atlantis/Rush match was probably the worst match on the show, which I don’t think is a surprise.

This was a pretty entertaining card, and the fact that the runtime of the show is just over two hours (if you discount the intermission) makes it a really easy show to sit through. 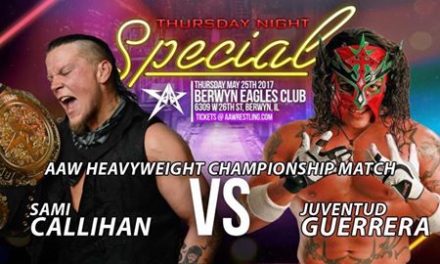 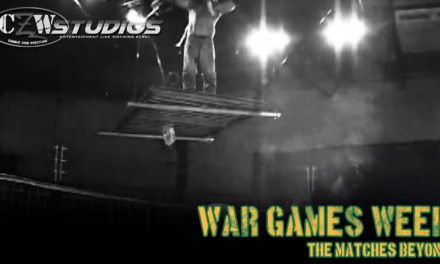