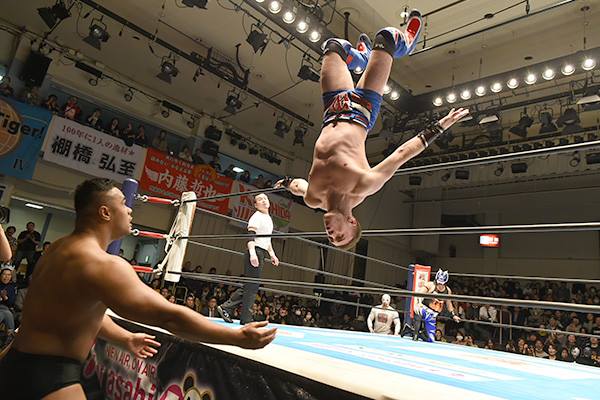 Hey there, I had nothing better to do so I’m filling in and doing a review for the January 20 Fantastica Mania show. I am probably the only person on this site who has seen more of the luchadors than the puro workers on these shows, so please be patient with me as I try and figure out what is happening. If I miss something that is contextually important, let me know!

Blue Panther Jr and Henare def. Ephesto and Will Ospreay

The opening matwork between Panther and Ephesto is fine, although it was very much an exhibition. I think the pace was right for the crowd and set the stage for Henare and Ospreay. Ospreay has a fun energy in this match. It’s nice that he isn’t taking himself too seriously. I have no idea if I like Henare as a wrestler but he should tag with Valiente based on their shared propensity to wear trunks that were probably purchased in the “husky 10 year old” section. The comedy section seemed misplaced although the crowd went along with it. Ospreay had a fun dive and Panther wins with el nudo lagunero. This was a fun opener but nothing more. **1/2

I’m thinking about giving this match one star for every time Gedo says motherfucker so that I can give this six stars. Probably shouldn’t, we all know how that can turn out. Anyway, this is a match. Liger does some fun stuff but mostly stays out of the way. Soberano gets some show case spots and hits his stuff pretty well. There isn’t much of a narrative here or anything to really dissect. If you like seeing guys work pretty quick and hit spots, maybe you will enjoy this as a nice little popcorn match. **1/2

First some context from CMLL: Maximo’s finish a kiss on the mouth. In the hyper masculine world of lucha libre, kissing Maximo causes such existential crisis and critical thought over the idea of masculinity that his opponents are paralyzed for three seconds. Hechicero has claimed that the kiss has no effect on him, which either means he is immune due to dark wizard magic or he is the CMLL heavyweight most comfortable with his own sexuality.

This match shows the comfort these four have with each other, as it is worked at a real clip and everything looks crisp. The double dive to start and the exchanges between all four are strong. Stuka jumping backwards from the top to the outside is insane, and Maximo’s head scissors and tope are both excellent. I think it’s interesting that the first two matches had comedy and this has been worked pretty straight. It shows the importance of the match for Maximo. I liked Okumura, who was relatively anonymous throughout, coming in at the end and working an injury like a true prick. Everyone really excelled in their roles and was given a chance to shine, although I wish Maximo had worked from underneath a bit more, even though this was brief. ***1/2

The first eight minutes of this are really interesting and well thought out. LOS are total pricks, with Rush setting the stage, but they are also savvy enough to know that they should try and avoid Tanahashi. When Tanahashi finally does get tagged in, he wrecks shop, and then Atlantis tags in and plays a little game of teammate oneupsmanship, with an awesome continuation of the hot tag. From there, Ingobernables are able to take back control by brawling on the outside and distracting Atlantis and Tanahashi. That allows EVIL and SANADA to isolate the inexperienced Finlay and get the victory. This was a classic narrative of a more cohesive (and underhanded) unit taking advantage of a less experienced (albeit potentially more talented) team. It got a little muddled as they struggled to find a role for everyone in just over ten minutes, but a fun watch nonetheless. ***1/2

I think I would have enjoyed this more if it was earlier on the card, because long stretches of it were very much more of an exhibition style than the past two matches. That being said, the finishing stretch here was awesome. They did a really awesome job of using Volador and UG as a through line for all the action, as the sections they worked together anchored the start, escalated the match in the middle, and played in to the finish. Aside from that, it was really fun seeing Okada pal around with Ultimo and Euforia. So far, this match had the highest peaks of any of the matches, but it didn’t quite come together like the previous two did. It was almost like three singles matches happening at roughly the same time. It just so happens that one of those singles matches was really outstanding. ***

A couple questions that have been on my mind before I talk about the match. One, now that he’s Hiromu, do we call that one lady Hiromu fan, or is she Kamaitachi fan forever? Two, how is Hiromu awesome everywhere but America? I really enjoyed most of this. One of my favorite matches of 2016 was Kamaitachi vs. Maximo, and the early portions of this match are structured very similarly. Titan does a great job of selling and when he finally goes on offense the transition feels really momentous. I hate punishing a match for a move that isn’t hit cleanly (especially one where a major portion of the match is based around selling an injury), but the head scissors to the outside really stuck out in an unfortunate way. The nearfall with the mask removal really got me to bite and got me back on track when I started to falter. The finishing stretch was a bit overdone for my taste, but it’s important to know the audience, and what works in CMLL might fall flat here. I don’t think this will make any MOTY ballots or anything, but it’s a great match, and Hiromu has found a great formula for working on injury as a heel. ****

There were two stories here that really complimented each other. The first is that Cavernario had to sacrifice his own wellbeing to do damage to Dragon Lee, with moves like the splash to the outside and the tope through the turnbuckle. The self-inflicted wounds were responsible for his wanting to end the match quickly, resulting in missteps like the second splash attempt and the reverse rana, which ultimately lead to the finish. The second through line was that all of the high risk maneuvers that Cavernario could attempt were putting him in danger of being set up for the double stomp from the turnbuckle. Really, the more times he tried to end the match, the more chances he gave Lee to turn the tide. It is really interesting for a light heavyweight match to try and tell a story based around risk in such a subtle way, as opposed to the usual “oh he missed now it’s my turn” that is seen pretty consistently. For that, this match deserves commendation. This is another match that will probably not be in the discussion at the end of the year, but people should find time to sit down and watch it anyway. It’s two great performers putting on a show. ****