Bad news: Next week’s Podmass will be the final edition. I have a new work situation that’s going to really limit my time listening to podcasts, so continuing my column just isn’t feasible. And honestly, I’d be lying if I said I wasn’t badly burnt out. This column isn’t fun to do, and I just think for the last few months I’ve been doing it just to do it, and I’m tired of delaying listening to barely passable podcasts (and putting off shows I really love) just to make deadline.

We’ll have a big season finale like Nitro next week. The podcast week in review, brought to you by Blue Apron. Sign-up at blueapron.com/VOW and get your first three meals for free!

Something to Wrestle With #23 (1/6/16): Ted Dibiase is this week’s featured topic. Bruce and Conrad present his entire run with the company, but put extra emphasis on Ted’s signing, the original pitch, and the vignettes. It’s a very genial show with hardly any mention of dirtsheets, as Bruce drops a lot of great stories like how Vince dealt with someone smoking on a plane to a time he lost the Million Dollar Belt. I didn’t think they could do 3+ hours on this topic, but they handle it with ease. THUMBS UP

VIP Lounge (1/8/16): Back from holiday break, MVP and Alex are joined by Low Ki. They talk about training techniques, Ki’s trailblazing independent work, and how wrestling companies can challenge the WWE. Low Ki’s thoughts on that last bit are pretty out there, but it’s so rare to hear him in this environment and I enjoy his honesty. The whole show is essentially about pro wrestling, almost to the chagrin of the hosts.   THUMBS UP

Conversation with the Big Guy #19 (1/2/17): The episode promises “The Wellness Program Part 2,” but we first we get a whole bunch of random nonsense, the most interesting part being Ryback backing up Alex Riley’s claim that Cena torpedoed A-Ry’s career, although he doesn’t elaborate (will someone tell the story already?). Then we get more into the Wellness Policy, mostly the unfairness in not testing part timers and the various substances on the list. The past two episodes have been significantly longer and not to the show’s betterment. THUMBS IN THE MIDDLE

The Card is Going To Change #31 (1/9/17): Part two of the AMA find John and Chandler answering a number of queries, ranging from how they select talent to book to working with Nick Gage to their thoughts on other independent groups like AAW and CZW. Nothing earth shattering, but a pleasant look at the nuts and bolts of running an independent group. THUMBS UP

The Steve Austin Show #393 (1/10/17): Steve sits down with Ted Fowl—wait, it’s Dave Meltzer!!! Big Dave makes a long overdue return to the show to talk mainly about the big Kenny Omega vs. Kazuchika Okada match, which Steve actually watched and loved. They also touch on some WWE and a good chunk of UFC. I could have done without so much MMA at the end, and there’s nothing here that’s revelatory if you regularly listen to WOR, but it’s always nice to hear Dave with Austin, and for Austin to get back on track. [Meltzer’s interview starts at 15:29] THUMBS UP

Killing the Town #13 (1/10/17): Cyrus and Lance talk to Paul Lazenby, who was live at Wrestle Kingdom 11, as all three break down the big Omega/Okada main event. They all have some criticisms, but all acknowledge being blown away by the end. Lance also has some problems with World of Sport’s booking and reviewing a fun episode of ECW. Some critiquing, but there’s a lot of pro wrestling enjoyment on display here. [Lazenby’s interview starts at 21:01] THUMBS UP

MLW Radio #260 (1/10/17): Conrad Thompson is back in the hot seat this week, as the gang talks about Raw’s strategy when going head to head with the BCS title game, Ted Dibiase stories, Raw and the Rumble, Stephanie McMahon never getting comeuppance, Shawn Michael’s promo, the new TNA logo, Jeff Jarrett coming back into the fold, the WWE Hall of Fame, Kurt Angle claiming he’s returning to WWE, Mania in New Orleans, the XFL, possible Will Ospreay/Cody Rhodes beef, and Wrestle Kingdom 11. A pleasant enough look at the news, but not nearly as interesting as Conrad’s last appearance. THUMBS IN THE MIDDLE

The Ross Report #152 (1/10/16): Independent star Drew Galloway joins JR to talk about the resurgent British wrestling scene, TNA’s status, working for Evolve, and finding his way as a performer after leaving the WWE. There are tinges of interesting conversation here, and Galloway talking to someone like Colt Cabana would be a much superior interview, but Ross isn’t the interviewer to have that show. [Galloway’s interview starts at 19:01] THUMBS IN THE MIDDLE

Talk is Jericho #316 (1/11/17): Jericho talks to smooth jazz icon Kenny G. Sounds like a bizarre show, but it’s actually really interesting as they discuss Kenny getting his big break with Barry White, becoming a solo artist, his breakthrough on the Tonight Show (an amazing tale), being gigantic in China, and being an early investor in Starbucks. Almost shockingly great show, as Kenny certainly has some tales to tell. [Kenny G’s interview starts at 5:44] THUMBS UP

Deep Blue Something #11 (1/11/17): Mike and Bryce talk about Omega/Okada from Wrestle Kingdom (and Okada’s one match in Chikara), the “You Only Live Twice” event, Robbie Ellis and Salvador Dali, the countdown to National Pro Wrestling Day, and recap their own Chikara matches of the year. The usual smooth listen. THUMBS UP

Bischoff on Wrestling #23 (1/11/16): ESPN personality (and Bischoff’s old defense attorney) Jonathan Coachman is the guest this week. They talk about Coach finding his way into sports broadcasting, moving onto Raw, his decision to move to ESPN, being “the wrestling guy” in Stamford, Ronda Rousey , and more. Coachman has appeared on a bunch of different shows, but to his credit he always seems to have new material.  [Coachman’s interview starts at 19:35] THUMBS UP

Art of Wrestling #333 (1/12/17): Sami Callahan makes a return to AoW after several years. There are a few bits about quitting various addictions and branding yourself as a wrestler. But the bulk of the show is about Callahan’s time in developmental, the day-to-day trudge, and what ultimately lead to him deciding to leave and return to the independents. As you can imagine, this is all right up Colt’s alley and there is a lot of insight into how quickly a dream job can become just another job. THUMBS UP

The Steve Austin Show – Unleashed! #394 (1/12/17): Steve talks about the remodeling work on his home and the National Championship Game, and then digs into a Q&A with his wife. Topics includes blading, Kristen’s brother, Steve’s knee braces, and whether Steve cooks the deer he hunts. Nothing to see here. THUMBS DOWN

Jim Cornette Experience #163 (1/12/17): Jim didn’t care for Okada/Omega (I know, I couldn’t believe it either), but the rant certainly provides a different viewpoint. The rant itself is something of a shame, because it’s overshadowing an excellent interview with Austin Idol. Idol talks about his early days in the business as “Iron” Mike McCord working for the likes of Vince McMahon Senior and Nick Gulas, as well as surviving a plane crash and reinventing himself as Austin Idol. Great interview that shouldn’t be overlooked.  [Idol’s interview starts at 42:58] THUMBS UP

Keepin’ it 100 #28 (1/12/16): Today’s topics include: Disco and Kevin arguing about paying for NJPW World, Kevin Kleinrock talks the big Lucha Underground midseason break, Shane Helms talks the new TNA (and the owl) and Meryl Streep’s speech, Juvie is back to judge more music, the gang talks the NFL playoffs, “Diamond” Dallas Page talks AWA, WCW, and attending old AAA shows, Dave Meltzer is on to talk Kenny Omega’s fate, more on the feud with Killing the Town, and the gang talks Total Divas and Raw. Just too long at nearly 2.5 hours. [Meltzer comes on at 1:33:09] THUMBS IN THE MIDDLE

MSL & Sullivan Show (1/12/17): In light of the recent Flo Slam shows that were held outdoors in the cold, Kevin tells a tale of wrestling on a farm for the yakuza. We then dive into the mailbag discussing Vince McMahon Sr.’s booking style and the decline of implants in modern wrestling before diving into the 1/13/97 Nitro, the fabled episode where the Hulk/Giant main event bled over into the premiere of Robin Hood. Good stuff. [The Nitro review starts at 39:13] THUMBS UP

Talk is Jericho #317 (1/13/17): Kenny Omega is the guest, but don’t get too excited as this interview was taped before the big Wrestle Kingdom match with Okada. Cyrus is here and it’s actually part of the same interview session that appeared on Killing the Town (they even recycle the chandelier story). But they still get into Omega’s early days, how he got into developmental almost by accident, wrestling in Japan, transitioning to heavyweight, his goals and more. It’s not a newsmaking interview, but Omega is a fascinating guest and there are a lot of great tidbits here. [Omega’s interview starts at 3:45] THUMBS UP & BEST OF THE WEEK

Something to Wrestle With #24 (1/13/16): “Ravishing” Rick Rude is the topic of the week. Bruce and Conrad talk about Rude’s territory days, his finally coming to WWF, the Jake Roberts and Ultimate Warrior feuds, him leaving the company, coming back to the WWF and appearing Nitro on the same night, Rude’s untimely death, and more. No real super stories or insights here, although the end tale of Bruce crank calling Rude is pretty funny. THUMBS IN THE MIDDLE

BritWres Roundtable (1/8/17): Arn is joined by special guest Mark Anthony to run down shows from World of Sport, PROGRESS, and ATTACK! Pro Wrestling.

Shake Them Ropes #191 (1/12/17): Rob and Jeff break out the Wheel of Topics to discuss Kenny Omega in the WWE, New Japan touring the United States, the WWE UK Tournament, and more!

Burning Spirits #12 (1/13/17): Brennan and Drew are joined by special guest Andy Labar to spend a whole show on ZERO1 and their New Year Dream Kouraken show. 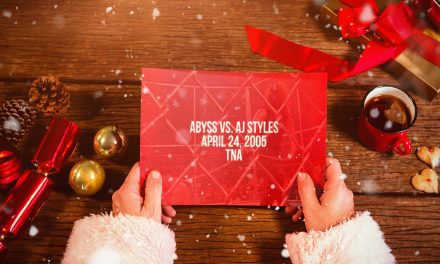