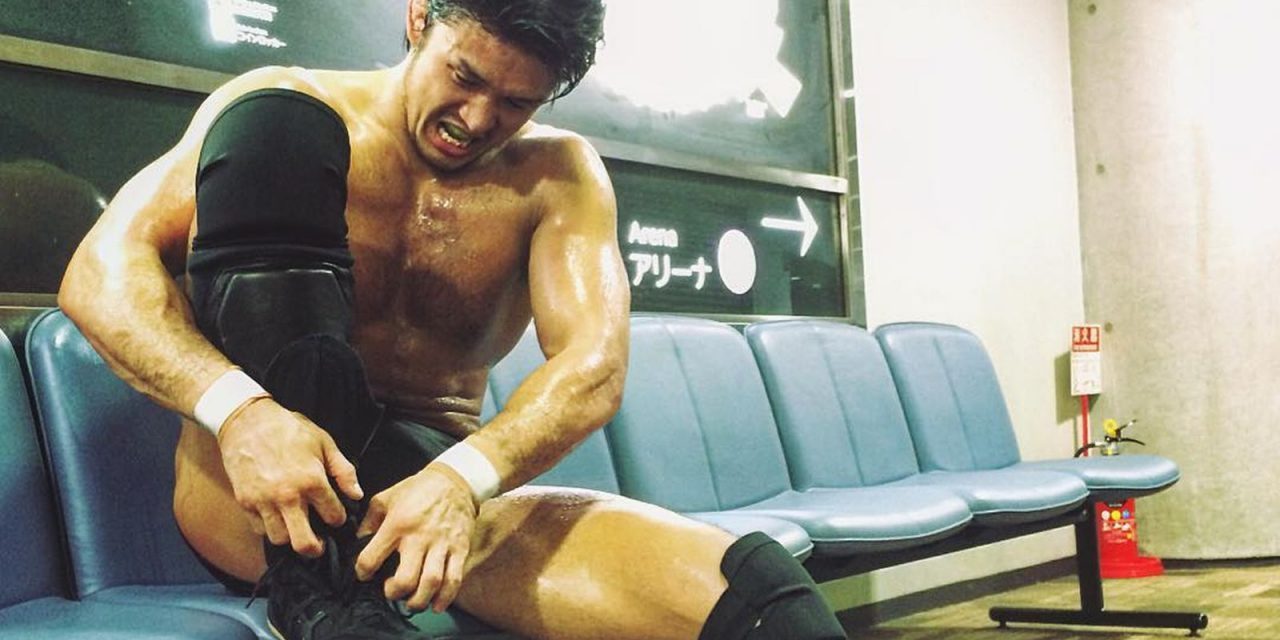 In preparation for my essay on Katsuyori Shibata’s redemption in NJPW (which you can read in VOW’s NJPW 2016 Year in Review eBook), I wanted to see what life was like for the young, angst-ridden Shibata as he wandered the wrestling landscape beyond New Japan. Following his exodus from NJPW in 2004, Shibata wrestled a total of 17 matches from 2004 to 2006 before making the tempestuous transition to the competitive world of mixed martial arts. This number does not include his one-off appearance at the Tokyo Dome in 2006 against Hiroshi Tanahashi, nor his 2011 tag team return to pro wrestling with Kazushi Sakuraba for the Inoki Genome Federation.

A major reason for Shibata leaving New Japan was due in part to him not wanting to change the way he competes inside the ring. In other words, he didn’t want to stop murdering dudes with his kicks. To this day, Shibata remains a lasting vestige of Antonio Inoki’s “strong-style” concept, which makes him one of the more unique attractions in NJPW. Curious to see how he interacted with wrestlers outside of the Inoki bubble, I followed his path of destruction through various Japanese promotions from 2005 to 2006  (with the exception of a couple matches in Riki Pro) and compiled a list of my top five favorite Shibata matches during his post-NJPW wrestling adventure.

The matches are in chronological order and represent varying degrees of violence as Shibata discovers  himself through the act of punting heads.

Despite Shibata’s rage, he was still just a rat in a cage – the cage being New Japan Pro Wrestling – and once he got out, he had some bottled emotions to uncork. Fortunately for us, he chose Jun Akiyama as a means of working through his feelings. Shibata is emphatically brutal right out of the gate, rushing Akiyama with a dropkick before backdropping him on his balding head. He gives Jun a little love tap kick to the face before busting him wide open with a follow-up shotgun blast of a kick. This only pisses Akiyama off as he starts throwing elbows, knees, and chairs on the outside, blood draining down his face. There’s a real sense of pandemonium with this match. At one point, even the referee is doing everything he can to prevent Shibata from going after Akiyama.

The psychological approach from Akiyama was like trying to stop a rabid pit bull from attacking. He goes after Shibata’s neck, piledriving him on the exposed concrete, laying into him with chair shots to the head, kicking and kneeing him in the face, backdropping him and immediately cinching in a front necklock. I love the desperation in their strike exchanges, with Akiyama throwing himself at Shibata.  The ‘fighting spirit’ rush of back-and-forth no sold offense was inserted perfectly into this and sure, Shibata is blowing off most of Akiyama’s neck work but he works in such an adrenaline-frenzied way that it takes a couple of head-drop Exploders to really faze him. The first five minutes of this match has some of the best brawling I’ve seen period and may go down as the greatest Wrestle-1 match of all-time.

Takeover, Shibata’s tag team with KENTA, was realized the previous month in NOAH as the two unsuccessful challenged for the GHC Tag Team Titles, held by Takeshi Morishima & Mohammed Yone. The pairing of Shibata with KENTA works on so many different levels. It’s a shame we only got three tag matches out of the disrespectful little pricks. I guess this match is where the “heat” between Shibata and Shiozaki took root, as Shibata kicks the crap out of Shiozaki to open this match and calls out Misawa with no fucks given. Hell of a way to start the match. Misawa took some major bumps (geezus, that springboard Doomsday Device) and the interactions between he and Shibata felt special. The narrative of the match is that Shibata really wants to put Misawa to sleep and defeat him. He dangerously backdrops Misawa on his head after a sleeper hold and slaps it right back on, tiring him out for the PK. Shiozaki breaks it up and immediately pays for it. For a young pup, Shiozaki doesn’t look half bad in there as he sells the Takeover beatings, which come hard and often.  In the end, he survives the PK from Shibata but not the vicious follow-up kicks to the head.

Shibata’s tenure in Big Mouth Loud, Akira Maeda’s short-lived “strong-style” promotion, saw the Wrestler mix it up with the likes of Kazunari Murakami, Satoshi Kojima, and Kensuke Sasaki. Perhaps the most fun I had watching Shibata in BML was his match against a pudgy, teenaged Nakajima. The match is full of heated strike exchanges, solid counterwork, and crowd-fueled hope spots for young Nakajima. I loved Shibata’s Cobra Twist counter into the shoot pin attempt and Nakajima’s mini-elbow shots. When Nakajima begins to mount a comeback, Shibata cuts him off the hard way with a piledriver! The arm work toward the end of the match provided a nice dramatic touch, as Nakajima fires off a big roundhouse kick and a German suplex hold but Shibata comes out of the two count with a double wristlock on Nakajima. Shibata follows that up with a PK to the arm, a kick to the chest, and he’s right into the armbar off the kickout. Nakajima tries to escape but when he slips up, Shibata sinks his teeth in and it’s over quickly.

Shibata returned to NOAH in 2006 for one last tag match with hot-headed partner, KENTA, against veteran Akira Taue and Shiozaki. This thing opens hot as Big Taue chicken-steps around the ring and Shibata tries to bully the vet with elbows and boots. Taue slaps him silly and gives him a coconut crush to the enjoyment of the fans and they eat up his subsequent dive tease. Shibata really brings out the best in the older guys, which is probably why his series with the New Japan Dads was so enjoyable. He doesn’t hold back, no matter the opponent. Once again, Shiozaki makes for a good whipping boy, especially against a pissed off Shibata. They have such great chemistry together. And KENTA pestering Taue on the apron was awesome. Shibata mocks Taue with a couple of coconut crushes over his knee to Shiozaki and oh boy, Taue is pissed off, rattling the ropes. Takeover tries to set Taue up for the Doomsday Device but he chops his way out, catching KENTA with a great chokeslam counter to the springboard before chokeslamming Shibata and hitting a sit-out powerbomb for a huge false finish. After Shibata takes down Taue with the sleeper hold > PK combo, they finish off Go with the brutal springboard Doomsday Device for the win.

Is there nothing more satisfying than watching Hayato “Jr.” Fujita get his ass kicked? Probably not. One of Shibata’s final stops before heading off to compete in MMA was Michinoku Pro, home to resident shoot-punk Fujita. This was short but fun for what it was, with Shibata quickly taking control of the situation after Fujita tries to rush him before the bell with kicks. Shibata stiffs him with his own kicks and slaps, suplexes him a couple of times onto the hardwood floor and even encourages Fujita to try and bring some fire before shutting him down. Fujita’s comeback was my favorite part of the match, as he kept right on top of Shibata, transitioning from move to move in accordance with Shibata’s actions. When Shibata struggles against a sleeper, Fujita German suplexes him and eventually goes back to the sleeper. When Shibata gets too close to the ropes, Fujita backdrops him on his head and applies a hanging front necklock. Again, Shibata fights it off so Fujita DDTs him and reapplies it on the ground. Alas, Fujita’s hope spots run out as he eats a big slap and a running knee from Shibata to set up the PK. But Shibata’s not quite ready to end Fujita’s suffering. He spikes him with a Pedigree, holding on for a brutal powerbomb follow-up before locking on a crab hold for the submission win.