It was announced this week that Ric Flair’s show was ending, apparently due to a lack of enthusiasm on the host’s part. While the show never reached the heights it did while on CBS, most weeks it was pleasant enough, but I can’t complain about my workload being lightened.

Due to scheduling, Bruce Pritchard will be covered next week. No VIP Lounge this week either.

The podcast week in review, brought to you by Blue Apron, get your first three meals free (with free shipping) at blueapron.com/vow

Conversation with the Big Guy #19 (1/2/17): The episode is titled “The Wellness Policy Part 1,” and we do get a look at the policy, what it’s like to be tested, and more. And that part is very interesting. But before that we have to hear about Ryback’s UK tour and how he ended up in a gay gym that it turns out wasn’t one. The show works a lot better when it keeps it brief and stays on the main topic. THUMBS IN THE MIDDLE

The Card is Going To Change #30 (1/2/17): A special AMA episode sees the gang  taking a bevy of questions, so you get some silly ones like favorite Steven Segal movies, but also plenty on wrestling with expected questions like wrestlers they wish they could have booked, whatever happened to, and the like. They explain the Rickey Shane Page situation with an admirable amount of restraint. Good stuff. THUMBS UP

The Steve Austin Show #391 (1/3/17): Q&A with Ted Fowler. Happy New Year. There are some minor wrestling tidbits (Arn Anderson was a talented talker if you didn’t know), but a lot of the show is about hunting. Pass. THUMBS DOWN

Killing the Town #12 (1/3/17): A bit of a format shift, as first they chat with Shane Douglas about his leaving ECW and his impending retirement. Then Cyrus and special guest interviewer Chris Jericho talk to Kenny Omega. There aren’t any big insights into his huge Dome match with Okada; instead Kenny tells stories about breaking a chandelier with a moonsault and having his junk hanging out during a match, which are quite amusing. There’s also an ECW television review with Lance’s famous promo about drug testing Tommy Dreamer. Good stuff. [Douglas’ interview starts at 6:02, Omega’s interview starts at 34:55] THUMBS UP

MLW Radio #259 (1/3/17): Matt Farmer occupies the hot seat this week, as he Court and MSL discuss Ronda Rousey’s second loss and her potential future in wrestling, Mania returning to New Orleans, Wrestle Kingdom 11, Raw and WrestleMania plans, the Royal Rumble card and ticket sales, the return of World of Sport, and the upcoming WWE UK tournament. No discussed: Alberto Del Rio’s latest alleged incident, which comes off as disingenuous. THUMBS IN THE MIDDLE

The Ross Report #149 (12/20/16): Ragin’ Alex Riley makes his Ross Report debut. He and JR talk about his football days, getting into wrestling, his time in FCW, his relationship with Dusty Rhodes, moving on to acting, and more. There are a few moments where things almost get interesting (Riley acknowledges an incident with John Cena that hampered his career, but won’t go into detail), but ultimately there’s nothing you need to hear. [Riley’s interview starts at 20:23] THUMBS DOWN

Talk is Jericho #314 (1/4/17): Norman Smiley is here to talk to old running buddy Jericho. A lot of the interview deals with his time in Mexico, how he ended up there, dangerous situations he found himself in, memories of Art Barr, the peso crash, and more. There’s also a bit about working as a trainer for the WWE and his run as a hardcore wrestler in WCW. Great stories and it’s not hard to see why no one has a bad word to say about Smiley. [Smiley’s interview starts at 4:44] THUMBS UP

Bischoff on Wrestling #22 (1/4/16): Eric and the gang talk about Ronda Rousey for a long time before they’re joined by Booker T.  Booker talks about his relationship with his brother, getting trained at Ivan Putski’s school, going to WCW and being in War Game, working with Hall & Nash, transitioning to the WWE, and running for the mayor of Houston. It’s an OK interview but not much more than that. [Booker T’s interview starts at 36:05] THUMBS IN THE MIDDLE

Art of Wrestling #332 (1/5/17): Bobby Fish makes his debut on AOW. They talk about ageism is wrestling, Fish’s football days and transitioning to crappy indies, going to Japan and wanting to be a young boy, his first gimmick of Jerk Jackson and the shocking origins of the Bobby Fish name (spoiler – it’s his real name). Really solid show with a lot of great stories. THUMBS UP

The Steve Austin Show – Unleashed! #392 (1/5/17): TED FOWLER. Another endless Q&A. We do learn kangaroos can’t walk backwards, so there’s back. On the plus side it’s the last episode we’ll have with Ted for a while as Steve is heading back to LA.  THUMBS DOWN

Jim Cornette Experience #162 (1/5/17): Jim and Brian kick off their first show of 2017 by breaking down the Rousey loss, more on Donald Trump, and Alberto Del Rio’s latest shenanigans. Then they are joined by Kenny Bolin for a health update and finally getting out of the hospital. OK Bolin appearance, but you should definitely check out Bolin’s appearance on the 6:05 Superpodcast New Year’s show, where he tells some terrific wrestling stories. [Bolin’s interview starts at 51:19] THUMBS IN THE MIDDLE

Keepin’ it 100 #27 (1/5/16): Today’s topics include: The gang discussing Raw, Shane Helms breaking down the last UFC event, Juventud Guerrera is back to grade more music, Ryan Satin argues with Disco Inferno about Ronda Rousey, Kevin Kleinrock talks about Lucha Underground’s lack of buzz, Colt Cabana joins the gang to talk about snorers in wrestling and whether he’s a millenial, the gang talks about NFL playoffs, more on the beef with Killing the Town, and more. A mixed bag as usual, but the Colt segment is really strong. THUMBS IN THE MIDDLE

MSL & Sullivan Show (1/5/17): The Nitro reviews make a welcome return, this time recapping the 1/6/97 with a cool sounding angle that never made the air. Before that we get the usual discussions to start, this time about why Networks don’t start their own wrestling shows and main eventers winning secondary titles, as well as a mailbag about how Kevin came up with the double stomp as his finisher and Will Sasso’s involvement on Nitro. Good stuff. [The Nitro review starts at 39:13] THUMBS UP

Talk is Jericho #315 (1/6/17): Jericho talks to legendary Cheap Trick guitarist Rick Nielsen and his son Dax (the band’s new drummer). They talk about the band still playing and their new album, but the bulk of the show is casually tossed off tales of such luminaries as John Lennon, Bon Scott, Slash, Dick Dale, and more. Very entertaining show, even if you don’t know the ins and outs of Cheap Trick. [The Neilsen’s interview starts at 4:03] THUMBS UP

BritWres Roundtable (1/3/17): Oli and Arn recap the last Euro wrestling shows of the year, the WWE UK tournament, and the World of Sport revival.

Voices of Wrestling (1/6/17): Wrestle Kingdom 11 was this week, headlined by Kenny Omega vs. Kazuchika Okada. You may have heard about it. Joe & Rich break it all down.

Burning Spirits #11 (1/6/17): The BS Boys (their phrasing, not mine) are joined by Dylan Justin to recap the big New Year’s Eve tag shuffle tournament, recapped what they liked in 2016, and look forward to 2017. 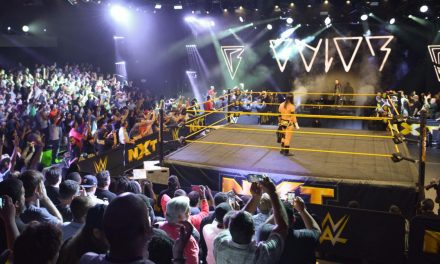 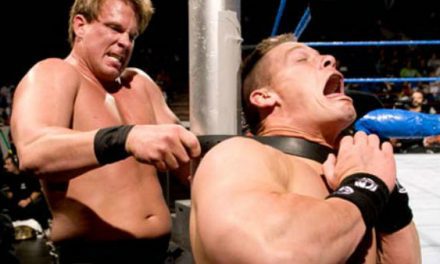