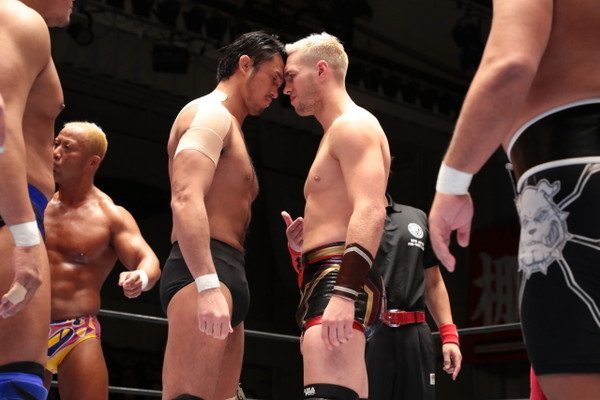 One day removed from attending the all-time classic, Wrestle Kingdom 11, I returned to Tokyo’s Suidobashi for New Year Dash 2017.  In recent years, New Year Dash has become a must-see show for its unpredictable nature.  The mystery card was announced to the live crowd minutes before the opening bell. The show also aired for free on NJPW World and, as of right now, is still available for free on-demand.

The opener was short and sweet. Henare stood out by showing his fighting spirit as the young lion roared while throwing aggressive elbows. Ricochet hit an impressive-as-ever dive to the floor, effortlessly landing on his feet. Finlay pinned Henare after he and Ricochet hit their Kamikaze/Shooting Star Press combo finisher. After the match O’Reilly thanked the crowd, his teammates, and opponents. Could this be the end of O’Reilly’s NJPW run? Good, fun match. Would have enjoyed few more minutes. **3/4

So, I hear Yoshitasu will be heading to to CMLL in February… *1/2

This was a very fun match. Both teams were popular with the Korakuen crowd. “Adam Cole BAY BAY” might be the thing that finally gets the ROH title over in Japan. YOSHI-HASHI got the surprise pin on Cole with a small package. The crowd reacted like this was a big win for YOSHI-HASHI and Cole’s reaction to the loss was great. Not sure where it will happen, but I’d be interested to see a singles match between the two. The match was fun and lighthearted, and the post match angle was a nice addition. ***

The Norton-led team came out wearing TEAM 2000 shirts as all of them (other than Cheeseburger, obviously) were members of Masahiro Chono’s group in the early 2000s. They teased Norton jumping to the Bullet Club, giving a figurative nod to the debt Bullet Club owes 1990s/2000s heel groups.  Cheeseburger getting thrown back into the ring from the floor got a big reaction from the crowd. The star of last year’s show, Kenny Omega was deservedly in house show mode and gear. Kojima beat BONE SOLDIER with a lariat. **

NJPW followed up on Elgin’s provocation of Naito at Wrestle Kingdom by reintroducing “Big Mike” in a big-time match. With referee Marty Asami knocked down, Naito hit low blows on KUSHIDA and Elgin. LIJ seemed to be in control until CMLL’s Dragon Lee hit the ring and dumped Naito with a release German suplex. Dragon Lee set his sights on his long-time rival Hiromu; dropkicking the new IWGP Junior champion off the apron and hitting a beautiful tope con giro, slamming his own leg into the guardrail. Elgin got the pin on Hiromu after a Burning Hammer. An exciting and fun match! ***1/4

Dragon Lee has already been announced for the Fantastica Mania shows later this month. I would love to see him have an even longer run in 2017.  At the very least, it seems like we might eventually be getting an IWGP Junior title match between he and Hiromu and maybe even a match with KUSHIDA.

This was a standard house-show encounter. It did, however, set up a match between Ospreay and Shibata, which is intriguing. After a PK from Shibata, Juice hit Pulp Friction to beat Goto. Pinning the new NEVER champ sets up a title challenge for Juice in the near future. **½

Suzuki-Gun are back and out for blood!!! The New Year's off to a brutal start! pic.twitter.com/JqhePqMO2y

After the match, Suzuki-gun rushed the ring to lay out both teams. Their maligned NOAH run in the rearview, Minoru and his gang were welcomed with an explosive ovation. KES hit a Killer Bomb on Yano to set up a IWGP Tag confrontation. Okada started to fight off the invaders, but was ultimately baited into a lightning-quick Minoru sleeper and spiked with a Gotch-style piledriver. It looks like we’ll be getting an Okada/Minoru title program soon. Minoru declared a war on all fronts against the other factions in NJPW.

The return of Suzuki-gun gives NJPW another faction with a strong following, and it’ll be interesting to see how their next run NJPW pans out. I think it’s safe to say that their two-year stint in NOAH was a disappointment that produced just a handful of memorable matches, but you wouldn’t know that given the buzz that this return created.

For the second year a row the 6-man titles headlined New Year Dash. Unlike last year, however, the champions crowned in the dome did not retain. This was an enjoyable match. I especially liked the “mirror-image” exchanges between Keiji Muto proteges SANADA and Tanahashi. NJPW is doing a great job using Tanahashi to build up SANADA’s resume in the company. Nakanishi pinned BUSHI after a Hercules Cutter to capture the belts for the hontai team.

New Year Dash 2017 was not as noteworthy as last year’s show, but it was entertaining nonetheless. It was a memorable show for its impact on the NJPW landscape going forward. I’m especially excited to see how Dragon Lee and Suzuki-gun are used in early-2017. 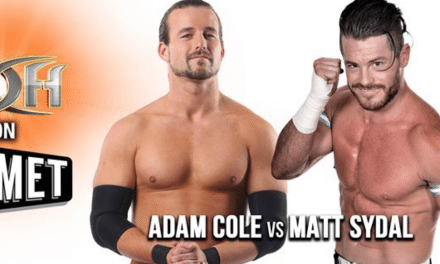 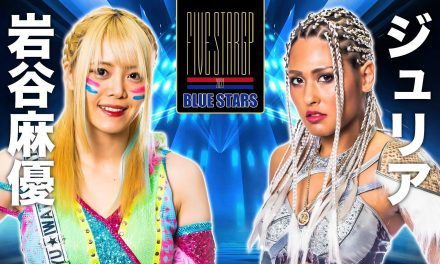