As we begin to close the book on the 2016 holiday season, this was a nice reminder that love is in the air. Yosuke Santa Maria, who has been chewed up and spit out by boys~ this year, happened to be matching the much older, much wiser Jimmy Kness J.K.S. tonight. Perhaps this was a one night event. Perhaps, however, this is the start of a blossoming romance. This could be Maria’s way out of failed relationship after failed relationship. Boys her age just aren’t doing the trick. In the coming weeks, I hope the two spend more time together, until Kness makes the inevitable move, just like I will do at the Olive Garden later this week. 2017 is the year of love, my friends.

This was not a very good match. NR

This was the first of two Susumu matches in the evening. He was decked out with festive wrist gauntlets, which I greatly appreciate. This match felt off. Big R, who has teamed with the likes of T-Hawk, Masaaki Mochizuki,and Akira Tozawa on a regular basis this year, simply did not have a natural chemistry teaming with Susumu. Nothing about them seemed cohesive. That hurt the match, despite the fact that they were facing off with such a strong tandem. North Tribe could waltz into the Twin Gate picture and I would have no complaints. Hulk is 36 and has battled injuries his entire career; at this point, the most Hulk might be able to do is tag at somewhat of a high level. He will continue to be pushed as a big star, but I don’t know if Hulk will ever be able to find singles success ever again.

Kzy pinned Big R Shimizu with a diving uppercut. I waited to see how this finish played out, and now that I’m writing this with hindsight, it still makes no sense. I’m not exactly complaining about Kzy picking up the win, but with as hard as Susumu has been pushed lately, I feel like the logical thing would have been to have him pin Kzy here to give him some momentum going into his Triangle Gate match later in the night. This was fine, and it was nice to see Kzy grab a win, but this wasn’t all that I had hoped it would be. ***

Ah, murder. There was no way that this match wasn’t going to be brutal, but even I did not expect the onslaught of violence that Fujii and Mochizuki gave to the Over Generation youngsters. In a year with LA Park vs. Rush and Joey Janela taking excessively danger bumps, this finds itself near the top of the list of violence in professional wrestling this year. Mochizuki, especially, was so vicious. This is what he wanted, and he clearly thrived at the opportunity to kick the ever living shit out of Yamamura. He wanted Yamamura to step up to the plate, and he did. This match did more for Ishida & Yamamura than anything else has to date. The two of them now feel hot. I’m interested to see where they go from here.

The finish has to be talked about, as Fujii submitted Yamamura with a Boston Crab after a brutal curb stomp from Mochizuki while Yamamura was still being held in the submission. Pure filth. This was nasty. For Fujii to submit a younger wrestler with a Boston Crab is smart in itself, but then for Mochizuki to deliver what was almost literally a deathblow; that’s marvelous. All the rage right now is the brand new crop of rookies, and rightfully so, but this was a nice reminder that Ishida & Yamamura still exist, and they have a bright future ahead of them. Go out of your way to see this. ***3/4

After what feels like an endless amount of time, Dragon Gate fans could finally quit their clamoring as Jimmy Kagetora found himself in a Brave Gate title match yet again. This was Kagetora’s seventh challenge for the title, and sadly, his seventh failure. This only lasted 11 minutes, but what these two competitors were able to do was nothing short of marvelous. Eita continues to be a magician on the mat, and for as much love as Kagetora’s grappling gets, I think we lose sight of the fact that very few people are able to build drama the way he does. He’s a stupendously smart professional wrestler. The only flaw with this match was the finish, and not even what the two did for the finish. In fact, the finishing maneuver, which was Eita’s signature Salamander, looked fantastic. It was too abrupt, however. If these guys had another five minutes, this could’ve been something really special and the match that we’ve all been looking for from Eita since he won the Brave Gate title in July. The finish felt a little rushed, which is the only reasonable knock I can give this match. ***1/2

This match closed out the first half of the show and would start a streak of “mixed bag” matches. For the most part, this was good stuff. Things started off a little too slow, and for a chunk of the match, it felt more like The Jimmyz vs. VerserK with the most exciting team, the unaffiliated trio, nowhere to be found. As much as I love El Lindaman, he could only do so much for his team. SaiRyo/Cyber Kong exchanges aren’t ever going to set my world on fire.

Once the VerserK dorks were eliminated (with a Backslide from Heaven no less, a tribute to the injured Genki Horiguchi), things really heated up. I want a lengthy trios run between Yoshino, Ben-K, and Kotoka. Kotoka works with these two! He’s scrawny, sure, but he’s a pesky secret weapon that plays perfectly off of the ace-like qualities of Yoshino and the exciting, explosive offense of Ben-K, who fooled me towards the finishing stretch as I thought his Ben-K Bomb was actually going to pick up the win for his trio. Imagine that – six months into his career, and Ben-K is single-handedly winning gold. I would’ve been down with that. Instead, Susumu turned the heat up and switched into overdrive, taking out Ben-K, then Yoshino, then finally Kotoka for the three count. Very fun match once it got going. One of the nine-man matches that would stick out in any other promotion, but it’s something we’ve seen before in Dragon Gate and we’ll surely see it again. ***3/4

This was a massive disappointment. There’s no other way to say it. Part of me wants to argue and say that this was in Fukuoka, and Fukuoka wouldn’t react if Jesus came out and challenged for the Dream Gate, but this was simply not very good. When CIMA works sprint-tags, there are few wrestlers that are more exciting. That’s when he seems driven. There was no drive here for CIMA on this evening. Even after a box attack from Cyber Kong that opened up a nasty cut on his head, he never shifted into another gear. His work felt flat, and as a result, the entire match turned out that way. This never picked up, despite a handful of interactions between Shingo and Dragon Kid, which are always exciting. CIMA mercifully ended this with a Meteora to T-Hawk just before the 27th minute. Too long, not enough heat, and simply the wrong kind of match for these two teams to work. **3/4

Ah, the mixed bag that I alluded to earlier. I have watched far too much Dragon Gate to expect a perfectly engaging Dream Gate match, especially with a crowd like this, but I was not feeling the matwork these two produced. Doi did a tremendous job selling the leg, yes, but I think YAMATO smothered Doi a little too much in the early stages of this match. If Doi would’ve won, it might have been different. I could buy an argument that YAMATO, the ultimate narcissist got cocky, and Doi, who always has the gears turning, outsmarted him in the end. YAMATO planting him with a Galleria and picking up the three count debunks that theory. The last seven or so minutes of this match were hot, and I loved seeing those back-and-forth exchanges. Much like the Triangle Gate match, this would be aces in another promotion. I know these two are capable of better, however, and that really hurt this match in my eyes.

I think Dragon Gate missed an opportunity with Doi here. I’m sure I’ll look foolish by the end of YAMATO’s reign, because I still have the utmost faith in Dragon Gate’s booking (and why would I not? Look at their track record), but Doi was more over as a babyface going into this match than I would’ve thought possible. The face turn was timed perfectly, and it felt like he had all sorts of momentum going into this match. He was no longer a wacky sidekick, or the shit-stirrer with the big mouth; Naruki Doi had transformed into a motivated, fiery babyface with enough charisma to lead Dragon Gate. I love YAMATO, and I still think that when he’s on, there are only a few wrestlers in the world with more talent, but YAMATO’s Dream Gate reign has been lackluster, and on top of that, he has no momentum within his unit, Tribe Vanguard, which has been an utter flop. This was not his match to win and I’m ultimately disappointed. ***3/4

Two mystery men help Doi to the back… #DragonGate pic.twitter.com/d7Pl4A70tU

Underwhelming show. There’s no other way around it. I never love Final Gate, but this lacked a strong main event like the prior two years (Hulk vs. Shingo, Shingo vs. CIMA) and because of that, I can’t give this show a thumbs up. This is one of the only Dragon Gate shows that I’ve watched this year without at least one match cracking four stars. There was nothing here to sink my teeth into, and I ultimately think there was a poor booking decision in the main event. Thumbs in the middle, leaning down.

Dragon Gate closes out their year in Kobe Sambo Hall on the 27th, and then returns to action on January 14th in Kyoto KBS Hall. Their first Korakuen of 2017 will be on January 18th. 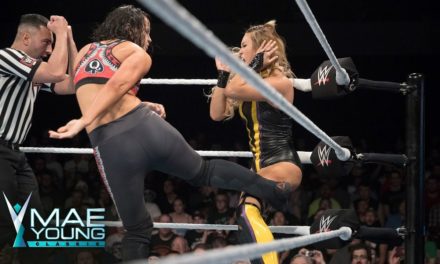