I’d be lying if I said that I wasn’t upset that this episode wasn’t a Christmas special.

Oh well, what can you do? I guess I’ll have to make one myself. Cue the opening! Imagine me in the Pee-Wee role.

Welcome to the 11th edition of my Tiger Mask W review/recap! Come inside the cabin and warm yourself by the fire. I’ll take your coat. What’s that music, you ask? Oh, why it’s the Christmas classic, A Christmas Gift to You from Phil Spector, the greatest Christmas album that ends with a creepy murderer thanking you for listening.

This week we’re taking a break from the Masked World League and we’re spending some time with our hero as he prepares for round two next week. As always, you can watch every episode of Tiger Mask W over at Crunchyroll and if you want to find the rest of my recaps, you can do that here.

The episode begins as Tiger Mask is packing up his things to leave the arena after the first night of tournament action. Fukuwara Mask pays him a visit to tell him to be careful in his next match. This advice from a veteran like Fukuwara mask just proves to Naoto even more that he needs to come up with a new killer move.

As Naoto and Haruna are on their way out, Dragon Young and It’s-The-Ace stop them to say hello. It’s not until Dragon Young asks Haruna out to dinner that she finally realizes that he’s really Ryu Wakamatsu, which is a shocking revelation to Tiger. Ryu might be the most resilient wrestler in the world. As we’ve seen in the past, Yellow Devil crippled Tiger the Dark’s father, but here’s Ryu walking around like nothing happened after his brutal beating last week.

Haruna tries to figure out It’s- The-Ace’s identity and Tanahashi pretty much has to spell it out to them before they discover the worst kept secret in all of wrestling.

Tanahashi explains that he worked out a deal with New Japan management (presumably Yuji Nagata) to let him work the Masked World League under an assumed identity with the goal of winning to ruin GWM’s big show. Tanahashi’s plan to come in and take out GWM’s big stars fits with Tanahashi’s past in DDT and his feud with HARASHIMA. His hope is that a finals match between Tiger Mask and himself would be the best possible outcome and that all the GWM fans would jump ship to New Japan to watch those two tear things up in the tag team division. In order to practice, Tanahashi invited Tiger Mask to train at the New Japan dojo, an offer that Tiger gladly accepts.

Back at home, Naoto tells his trainer that he needs to go train with the New Japan guys to work on his killer move. His trainer then goes full-on old man, ranting about how the kids are doing too much in the ring. The body slam and keylock were killer moves back in his day! Really, he’s mad that Naoto will be training without him, but we’ve all heard a wrestling fan go on this rant before.

Naoto shows up at the dojo and asks Tanahashi to perform all of his signature moves on him. Look, we all find inspiration in weird things, but I’ve never once thought about having a friend beat me up until I came up with an idea for something I needed. Naoto takes a beating from Tanahashi, who is all too happy to help, but it doesn’t seem to really do anything. That’s when Okada jumps in and offers to “help” Tiger Mask too.

Before we see Okada open up a can of whoop ass, we go to GWM’s training facility where they’re having an open workout with a bunch of press invited. It would be foolish to say that this facility wasn’t modeled after the WWE Performance Center. Miss X explains that they even use NASA technology to help some of their wrestlers train. Speaking of space, let’s go to the Satellite of Love for a quick song break.

That was great guys, thanks! Miss X continues to put over the Performance Center to the reporters until Tiger Mask W’s resident Lois Lane, Hikari Kuruma, asks when they’ll finally get to interview the wrestlers. The reporters have free reign for interviews, except for Yellow Devil. He’s off limits. Hikari talks with Tiger the Dark, who tries his best to give her nothing useful. Even with their short interactions together, Hikari is able to pick up that Tiger the Dark is different from the rest of the GWM wrestlers.

Hikari leaves the PC and runs into Haruna, who’s there to pick up tickets, on the way out. Haruna explains that Tiger Mask is at the New Japan dojo to work on a killer move and how it upset her uncle. Hikari recognizes how important it is for Tiger Mask to have a killer move in this day and age. She explains that wrestling has changed over the years to be faster and harder hitting. The old ways just don’t work anymore. HA! TAKE THAT, OLD MAN!

Back at the New Japan dojo, Tiger Mask is looking a bit rough. As Okada’s stretching Naoto, we see a man walk into the dojo. We don’t see his face, but he sits down to observe. Tiger starts to fight back, but then Okada Rainmaker’s him into oblivion. There’s an actual shock wave that comes from the impact. The mystery man starts to clap to make his presence known and his Los Ingobernables jacket tells us exactly who this is. Tetsuya Naito is clearly not wanted here by Okada or Tanahashi, but he gives some valuable advice to Tiger Mask; tranquilo!

We leave all the angry boys at the dojo and go with Takuma as he visits his father’s assisted living center. We see that Daisuke Fujii is making some progress, allowing him to get into bed on his own. Takuma gives the nurse a bag of his dad’s favorite pudding, but refuses to leave his name. Once Takuma leaves and the nurse explains to Daisuke what happened, Daisuke flings himself out of the bed and tries to crawl out of his room to go catch up with his estranged son. It’s actually a pretty heartbreaking scene and hopefully we’ll get a family reunion at some point.

Oh, did you guys hear that? It sounds like someone’s at the door!

What a lovely performance! David, Bing, thanks for stopping by. Speaking of stopping by, Tanahashi and Ryu stop by at Naoto’s house to pick him up to go on a bit of a training journey. Tanahashi explains that the inspiration for the Sling Blade came to him in a dream and says that they’re going to help Tiger find inspiration by taking him to a waterfall. As TM stands under the waterfall, Tanahashi says to Ryu that the idea for this came from Hirooki Goto coming up with his current killer move by doing the same thing. Ryu, who clearly pays more attention to the booking, explains to Tana that this wasn’t the case. Goto found inner peace by standing under the waterfall, not a new move. Tanahashi refuses to admit that he was wrong and says that this should help Tiger anyways.

While Naoto meditates under the waterfall, the GWM wrestlers push themselves in the NASA approved Performance Center. Takuma, his two generic white guy friends, and Yellow Devil all run on treadmills in the special atmosphere room. Takuma orders the oxygen level in the room to be dropped, which pretty much KO’s his friends, leaving only him and Yellow Devil running.

Finally, we get a bizarre scene where Ryu and Tanahashi give Tiger Mask “the NJPW induction.” I would never have guessed that the NJPW induction involved trying to poke the inductee with torches, but here we are. Tiger Mask uses a moonsault off a wall of rock to escape the fire, which starts the gears turning for his killer move. They try it again and this time we don’t see the impact, but whatever Tiger Mask did, it took down Tanahashi. The episode ends as they are about to try a third time. Are they crazy enough to give Tiger Mask the triple jump moonsault as his killer move? It’s a longshot, and a gamble, but I hope they go for it.

Well, thanks for coming to the Tiger Mask Christmas party! We had a great time today. We learned some movez and saw space technology. Next week, Tiger Mask takes on Tiger the Dark in the semi-finals of the Masked World League. See you all then, drive safe through the snowy roads!

I wave goodbye to everyone as they leave and gently close the door. After throwing another log on the fire, I turn and face the camera.

“Hello, this is Kelly Harrass, it is so difficult at this time to say words that would express my feelings about the column that you have just read, a column that has been in the planning for many, many months. First, let me thank all the people who worked so hard with me in the production of this column and in my endeavor and desire to bring something new and different to the banter of Christmas and to the wrestling industry which is so much a part of my life.

Of course, the biggest thanks goes to you for giving me the opportunity to relate my feelings of wrestling through the cartoon that I love. At this moment, I am very proud of all the characters and on behalf of all of them, Tiger Mask, Tiger the Dark, Hiroshi Tanahashi, Yellow Devil and the GWM, and myself, may we wish you the very merriest of Christmases and the happiest of New Years, and thank you so very much for letting us spend this Christmas with you.” 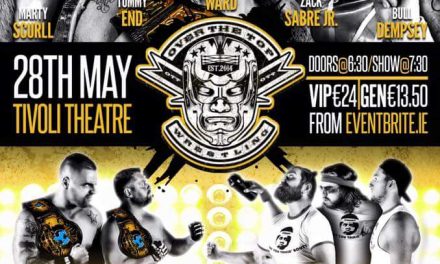