Much like its name, EVOLVE has constantly needed to change since the beginning of the year. An influx of new talent ended its comfortable existence as niche grappling federation. Partnerships with the WWE and FloSlam put the company on the wild frontiers of the business. Cornerstones like Johnny Gargano & Rich Swann said goodbye while mainstays like TJ Perkins and Drew Gulak did the same. But the talent featured on and the closing segment of EVOLVE 75 proves that name is not just a moniker, it is the embodiment of the entire outfit.

A night after scoring an impressive debut win over Matt Riddle, Jeff Cobb took on one-half of the EVOLVE Tag Team Champions, Fred Yehi. Being the living incarnation of the Napoleon Complex, Yehi took every opportunity he had to pounce on Cobb. Of course, Yehi took quite a few tosses across the ring for his efforts, and that was the story of the match. Yehi went hold for hold and strike for strike with the former Olympian. In the end, Yehi couldn’t equal Cobb’s power and fell to the Tour of the Islands.

I think Cobb and Yehi both came out of the opener looking sharp. Yehi came across as a headstrong terrier and Cobb’s second huge win in a row puts him firmly in the EVOLVE Championship picture. ***

Drew Gulak came out to berate Yehi for the loss. Yehi said that he had no regrets losing to a man like Jeff Cobb. Gulak retorted that is why he considered Catch Point a failure. Tracy Williams, who accompanied Yehi to the ring, responded and took up for the stable. After some back and forth, Williams and Gulak added a stipulation to the main event: if Gulak won then Catch Point was out of the WWN Championship tournament, but if Williams won then Gulak was out.

With a win, Jaka and Dickinson would earn EVOLVE contracts, and they wrestled as if their futures were on the line. After getting laid out by Peter Kaasa in the opening minutes, the Team Pazuzu duo isolated Darby Allin and beat the stuffing out of the little crash dummy that can. Even when Allin eventually tagged in Kaasa, the outcome did not seem favorable for his team. Once Allin was the legal man once again, Dickinson and Jaka resumed their assault and finished him with a chokeslam/electric chair drop for the 1-2-3.

Nobody takes a better bump than Darby Allin, and I will stand by that statement too. Every time the guy wrestles he ends up looking like the victim of a mugging. It truly is stunning work. Dickinson and Jaka are nice, rough around the edges pair that adds depth to the tag division. They worked hard over the weekend and are an excellent addition to the roster. **½

In a classy move, WWN Ambassador Trevin Adams came out to welcome Jaka and Dickinson to the promotion with their contracts and a hardy handshake. Then the sleaziest man on Earth, Larry Dallas, came out to ruin things. Dallas insulted the attempts of both men to get into the company in the past. Dickinson got in Dallas’ face and said that his partner and he had bigger things to worry about before the pair left the ring.

Following an upset win over Chris Hero in the main event of EVOLVE 74, Dick Togo was in the hunt for another against Ethan Page. Page, well “All Ego” just wanted to be a straight up bully to Togo and the result was a fired up veteran. These two spared one another no quarter and traded bombs the entire the contest. Page ended up getting the lucky break when he blocked a Togo superkick attempt, spun him around, and converted Spinning Dwyane–which was enough for the three count.

Ethan Page is the best asshole in professional wrestling, as evidenced by his condescending attitude towards Togo’s height early in the match. The man is a fantastic heel and often that work is often ignored for tired echoes on social media that he is not a super worker. Anyways he and Togo meshed well, and the result was a super third bout on the card. ***¼

“All Ego” was not content to only back in the glow of a clean victory; he wanted to rub it and dispatched his lone Gatekeeper to give Togo a good beating. The veteran got the last laugh by fighting off the larger man courtesy of a Pedigree followed by a diving senton from the top rope.

DUSTIN wanted revenge for Hero costing him the EVOLVE Tag Team Championships in Joppa, Maryland. Hero simply desired to knock DUSTIN out for merely mentioning his name, and early on the “Knockout Artist” elbowed and stomped the proud Kentuckian all over the ringside area. DUSTIN finally got his opening and fought his former ally evenly for the rest of the contest. He just couldn’t put Hero away, not even when he used the official as a human shield and parlayed the situation in low blow/small package combination for an almost three count. Hero, in turn, rewarded DUSTIN’s duplicitous actions with two knockout elbows, two piledrivers, and finally a pinfall loss.

Hero and DUSTIN worked well together and constructed a match with a simple story. DUSTIN did his best to defeat a superior opponent in an honorable manner. When that did not work, he tried to cheat. Cheating did not sit well with Hero. He got mad and even by obliterating DUSTIN during the closing sequence, and the result was the first must watch match of the night. ***½

When a match starts with each competitor sprinting out of their respective corners to fight it is safe to say something special is about to take place. Riddle and Ricochet did take a break to breathe. They exchanged strikes and suplexes. They reversed each other’s pet moves and had the crowd going crazy. The only difference was Riddle’s resilience. “The Bro” took a shooting press and reversed the Benedriller before locking in his twister to put his record at .500 for the weekend.

This match clocked in at under ten minutes and even in that brief amount of time did not feel like a drag. Ricochet and Riddle worked a shade under sprint pace, and that helped keep the crowd emotionally invested in the bout. It is amazing how Riddle went from working five minutes with Chris Dickinson to matching a world class talent like Ricochet regarding work rate. The former UFC fighter has not even scratched the surface of his talent, and that is amazing to behold. ***¾

The main event featured teacher vs. protege, former partner vs. former partner, and the final schism in a once rock-solid friendship. More importantly, this was a battle to see if an ideology would live or die. The meaning of the Catch Point is nebulous at best, but the style is a rough form of technical wrestling last seen in the southern territory system. Williams and Gulak fought slowly and then they fought fast. They traded holds and brawled all with the notion of softening up a body part for a submission victory. Williams struggled out of his mentor’s dreaded dragon sleeper and finally latched on his cross face to get the seminal win in his EVOLVE career.

36 minute, mat-based main events are not something that many wrestling fans in 2016 want to see. Such matches like this one have a shelf life of maybe 22 or 23 minutes tops before they lose steam, which happened here. However, between a few prolonged segments, there was a fine chain wrestling and good old fashioned butt whipping. Furthermore, this was a good moment for Williams and give his character a new lease on life as the defender of the Church of Catch Point. I would love to rate this higher, but it has to settle for being a good match instead of a great one.  ***½

After the match, Gulak was quick to repent of his sins against his own teachings. Gulak said that they would live own through wrestlers like Fred Yehi, Matt Riddle, and Tracy Williams. After that he offered Williams his hand and the two made peace. Then, out of nowhere, Dickinson and Jaka hit the ring to say that they wanted in. Gulak said it wasn’t up to him and handed Williams the microphone. Williams offered the two his hand and they accepted. As the show closed, the revitalized unit posed proudly.

EVOLVE’s final show of the year was understated, solid affair from top to bottom. The top half of the card is more than enough to recommend with Riddle vs. Ricochet venturing into go out of your way to watch it territory. With the exception of the main event (which I suggest watching separately) EVOLVE 75 is a brisk watch and highlights, how with a few key names missing and some on their way out, just how deep their roster has become since January. 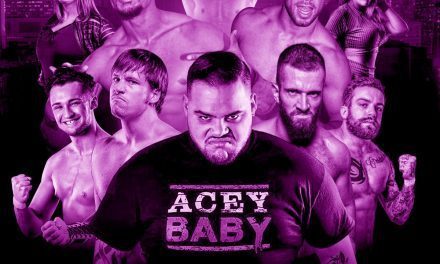 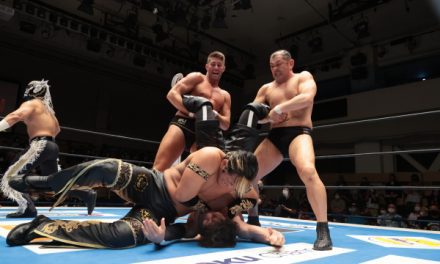