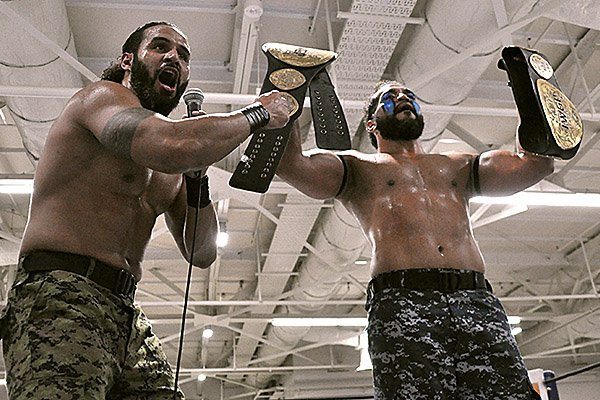 The story of this match was Henare, who is improving at a pace far beyond what I (or anyone really) could have imagined. Sure, his offense still consists primarily of yelling and shoulder blocks but this kid looked lost even a month ago, now he’s the focal point of a match with the Intercontinental Champion. It was a little odd to see Naito taking so much of Henare’s offense but both Naito and Rush got their revenge in the final few minutes of the match.

Nakanishi was taken out by a dropkick to the knee by Naito. That move would knock someone out for a minute or so but not Nakanishi, oh no, he was DONE for the night, rolling to the outside to grimace in pain. Then it was all Naito and Rush as they decimated the youngster before Rush finally finished him off with the Rush Driver. Naito/Rush continue their potential run to the finals moving their record to 4-2 (8 points) while Nakanishi & Henare continue to be shut out (0-6). **1/2

Good job, good effort Breaker & Race but this match was the War Machine show and really, this entire A Block has been their playground. Let’s please not let them go back to America. I want them in New Japan forever and ever. This was yet another great display by the duo as they continue to impress. The live crowd reactions they get, particularly when Hanson does his suicide dive and when they hit the Fallout, is something else. These guys rule. **1/2

This wasn’t anything to go out of your way to see but it was far better than I would’ve expected any match involving Yujiro to be. It helped that Page and Kojima were the primary focuses of the match highlighted by Page getting the shocking victory over Kojima. We say it all the time but Kojima is a god damn jewel. You’d love to see NJPW do more with him unfortunately it may take Tenzan retiring for that to become a reality. Either way, this one is fun. Don’t drop everything and watch it now but if you’re looking for solid, well-worked World Tag League matches from this year, add this to your list. ***

Competitive until the final moments, the Guerillas of Destiny once again impressed with a solid showing against Juice & Tanahashi. Typically a rest period for Tanahashi, he’s been more active this World Tag League season including this match where he had a few moments of vintage Tanahashi. The final stretch saw both teams scratching and clawing for victory but coming up just short. There was a Juice Robinson schoolboy that he me and the Kobe Sanbo Hall faithful thinking Juice pulled off the upset of the night. Alas, Guerillas of Destiny knocked Tanahashi out of the ring and set their sights on Robinson before finishing him off with the Guerrilla Warfare. GOD moves to 5-1 with 10 points (currently atop the block) while Tanahashi & Robinson fall to 2-4 (4 points). ***1/4