Last night I attended NOAH’s ONE NIGHT CRUISE 2016 at Tokyo’s Korakuen Hall. The purpose of this article is to give readers an early take on the main event, one of my favorite matches of the year.

The path to last night’s GHC Heavyweight Title main event between Katsuhiko Nakajima and Minoru Suzuki was tumultuous and indirect. To NOAH fans, 2016 has been frustrating, alienating and illogical. My purpose is not to re-hash the entire tragedy of the Suzuki-gun invasion, but rather to give some recent and relevant context to the match. Thankfully, the recent sale of the company seems to have resolved the story sooner than expected.

This was the first defense for Nakajima, who finally captured NOAH’s top title at their October 23 Yokohama show. Suzuki-gun’s namesake and leader recently defeated the champion in a league match on his way to winning the Global League.

Just a few weeks ago, Minoru was on the cover of Weekly Pro-Wrestling, promising that a final time-bomb would end NOAH for good. He alluded that this bomb would be bigger than the defections of Takashi Sugiura and Yoshinobu Kanemaru. The pre-show video hyped this as the final battle between NOAH and Suzuki-gun. Katsuhiko vowed to protect NOAH; Minoru was seeking to end it all.

The beginning of the match was deliberate and tense. Much of the early match was built around Minoru’s ability to defend against and counter Katsuhiko’s middle kicks. Minoru relentlessly attacked Katsuhiko’s leg throughout the match, in and outside the ring. As the pace picked up, Minoru’s elbow strikes were among the hardest I’ve seen. Each one got a gasp from the nervous and mostly partisan NOAH crowd of 1,110.

Although Minoru was able to defend against the middle kicks, Katsuhiko eventually landed a few big-impact high kicks started to turn the tide. In a symbolic tribute to NOAH’s founder, Katsuhiko landed two rolling elbows and a running elbow smash to put Minoru on the defensive.

Minoru Suzuki was incredible in this match. His facial expressions, character portrayal and in-ring work make this one of my favorite Minoru matches. At one point, when setting up for the Gotch-style piledriver, he exclaimed “IT’S ALL OVER!” in his unique and menacing growl. As the match wore on, Minoru did an amazing job selling the idea that he couldn’t outlast Nakajima; he needed the time-bomb. In the final minutes, Minoru kicked out of one Vertical Spike, but was in panic mode. The “final boss” desperately called for the time-bomb to appear, but it never did. Suzuki’s performance reminded me that he can still be a top-notch performer and I’m looking forward to his next steps.

In a career-defining performance Katsuhiko was able to land one last high kick that had fans thinking Minoru was knocked out. He eventually put him away with another Vertical Spike; ending a great 37-minute match which is among my favorite matches of the year. Katsuhiko delivered the perfect performance for this match. His selling had the fans worried and his comebacks kept their hopes alive. This is what I was hoping we would get out of him in Yokohama. This is what I have been hoping we would get out of him all year in NOAH. The future of NOAH is in good hands with Nakajima at the helm.

NOAH has created a terrible main-event stigma this year with overbooked, interference-laden messes that usually send fans home unhappy. Throughout the invasion, NOAH trained its fans to be skeptical, particularly of main events. I personally feared that either Naomichi Marufuji, Go Shiozaki, Masa Kitamiya or worst-case scenario, Masayuki Uchida would close out the show wearing a Suzuki-gun shirt. However, since Uchida took over, NOAH has started to reverse some of that stigma by providing fans with much-needed feel-good endings. Fortunately, the match more than delivered and so did the booking. 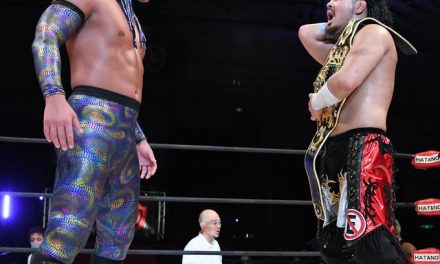