I was dreading having to review this match. Even with the Guerrillas of Destiny improved night-by-night and becoming the team we had all hoped they could, Yujiro is on the other side of the ring and I’d have to back nearly five years to find the last time I was genuinely entertained by anything he did. Boy, they showed me. No, I haven’t gone nuts, the match itself from a pure in-ring standpoint was no good. Tonga won, by the way, with the Stun Gun pinning Yujiro. The fun in this match was the Bullet Club vs. Bullet Club dynamic and how these teams would get around it.

Tonight, they began the match by agreeing they didn’t want to fight as they told Red Shoes to start the count while they made their way backstage. As Red Shoes got to 18, Tonga sprinted back into the ring while the others chased him, everyone sliding in right before the 20 count. This led to an argument of sorts as the duos tried to figure out the real intentions of their opponents.

Finally, they agreed to have a “match for fun.” This included minutes of playful banter, Yujiro trying to figure out how he could reach Tonga Loa to “Two Sweet” him. It wasn’t very good but I laughed plenty during the opening few minutes so good for them. **

A tale of two polar opposite teams in this main event. On one side you have War Machine who operate like a well-oiled…machine. Every move, every sequence, every tag, it’s all done at precisely the right time. The experience of the two and the chemistry between them is palpable. Moreover, these guys fit like a glove in NJPW as their rough style and blended big man/high-flying offense fits so perfectly in this company. Hanson in particular stands out as unlike anything else on the roster now and garners huge reactions from the crowd for almost everything he does. They were the clear standouts of this match and they’ve had an awesome tournament so far. I’d love for them to get called back and work major shows in the future.

The other team, well, they don’t have chemistry. The Rush/Naito dynamic has been awkward, weird and ill-fitting from the opening of the tournament and 10 nights in, they still don’t seem to have anything. Rush, in particular, seems disoriented or confused. There were a handful of spots in this match alone where he was either in the wrong spot, had no idea what to do or had no concept of what Hanson/Rowe wanted to do. It resulted in a number of uneasy moments and awkward/dangerous moves. Adapting to a new environment is never easy for a wrestler and we often take for granted just how difficult it is, particularly with language barriers. Rush is a talented wrestler, anyone who has followed him knows that but for whatever reason, it just hasn’t clicked on this tournament. Let’s see if he gets it together in the final few days. 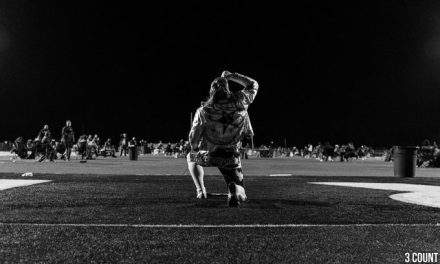