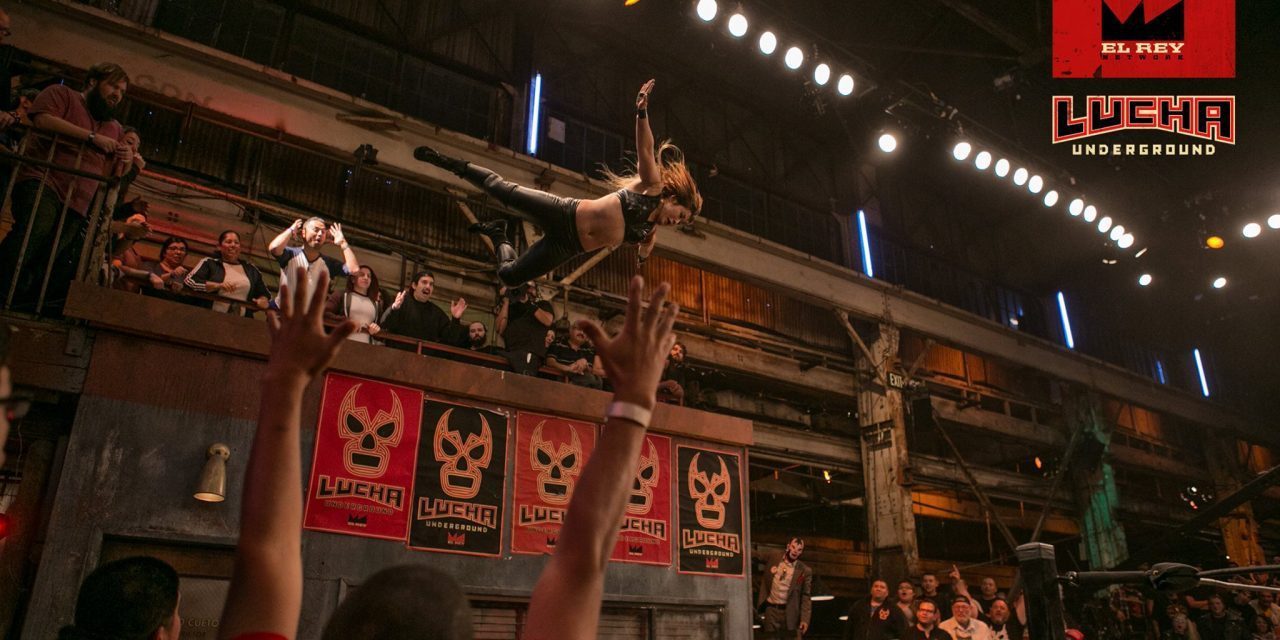 As the great Anderson Silva once said, “I back,” and man do we have a lot to cover. A lot has happened in the three weeks that I’ve been out post-surgery. We’ve had two new Lucha Underground champions. Several in-ring debuts have taken place. The Temple has been hoppin’. Rather than individually reviewing each episode, we’re just going to smash all three of them together here in one mega review/column/rant. Strap in, kiddos.

The big story, of course, was Sexy Star’s win at Aztec Warfare III, claiming the Lucha Underground Title. It was polarizing back in March when the episode was taped and the news broke and it seemed to summon an equally large firestorm after it aired. There were people that loved the decision and people that hated it and an incredible amount of reasons to be on either side.

Those who applauded the move had their rationales:

Those who criticized had their own reasons:

I hoped that watching the episode I was going to come out feeling strongly about one of these sides. That obviously makes writing much easier; the hardest weeks are the ones where I’m unenthused about the whole show. When the episode was over, however, I didn’t feel much of anything.

I’m a sucker for moments in wrestling. It’s the one thing that keeps me going back to WWE, they largely excel at creating them. There are so many things that stand out vividly in my mind. Pieces of promos and angles, spots from matches, camera angles that only they had the attention to detail to catch. The times when this dumb art form we all love so dear felt big and important.

Sexy Star winning the Lucha Underground Title was not one of those moments.

For one, put me firmly in the “Sexy Star is not good at this” camp. I’m sorry, she’s just not good at wrestling. You can’t watch her work in Aztec Warfare or the match with Johnny Mundo a week later and think that she’s on par with the best guys in Lucha Underground. She has a great gimmick, I’ll give her that. She has a unique charisma that comes through even under a mask. That’s where my praise of her performances comes to an end, though. She’s just not good.

Don’t get me wrong, not every champion needs to be Daniel Bryan or Prince Puma. This isn’t a shoot, the most talented don’t need to be the champs by default. However, Sexy Star isn’t bad in the same way that some other champions are bad. She pulls you out of the match. All I seem to be able to think about is how bad she looks out there. I’ve honestly laughed out loud during most of her matches this season. It doesn’t work when you try to make that character your champion. It’s dissonant with what I’m seeing when she’s out there.

As far as the win being a moment is concerned, the writing of the show blew it. I mean, they just completely dropped the ball here. You could have told this story in a way that made it feel special when she won, but they took short cuts and as a result, they failed.

First of all, you’re not fooling anyone with those plants in the crowd. Those five white girls that showed up on screen only at the end of the main event were just a liiiiiiiitle out of place. It was obvious that they were extras and I think the audience largely resented being thought of so lowly, as if they wouldn’t notice. Again, I laughed out loud here.

Secondly, if you’re trying to convince us that the crowd is thrilled with this result, don’t let us see that those in the crowd clapping are doing it with all the enthusiasm of someone who has just seen a precocious dog perform at halftime for an Arena Football game. Certainly don’t let us see that many in the crowd are not clapping or chanting. Definitely don’t have a guy wagging his finger in disgust in the background while the pinfall is counted.

They wanted this to feel emotional, but gave us no reason to feel emotional about it. As much as I love the show, the title means nothing. In the text of the show even, the title feels like Lannister’s squabbling over a chair while ice zombies are coming from the north to kill everyone. There’s a war coming to the Temple involving gods and the end of the world. This belt doesn’t matter. They’ve told us that in the show.

Looking from outside, the belt doesn’t mean much either. It’s young, it’s from a promotion with an incredibly small following, and it’s not been held by anyone to give it major esteem. I have no emotional attachment to the holder of this belt. It’s a prop on a show with literal dragons and snake-people.

Sexy Star has a tremendous backstory, but they didn’t do anything to tell that story in conjunction with the match. Why was this not recapped leading in? Why was Sexy Star off the show the previous week completely? There’s emotion in her story, but they left it out of the match.

Instead, they gave us, “the champion is a girl!” That’s not enough here to have a moment that’s going to resonate with the audience in any meaningful way. Especially not in this promotion.

Here’s how I would have fixed it:

Maybe that would have made it feel like more of a moment. Mind you, this was all doable. I’m talking hiring one child actor (or ideally finding one child who might actually be a Sexy Star fan) and being more goal-oriented in the writing leading up to the match. It needed something else to give it that emotional hook. Instead, we got some obvious plants and Matt Striker at his most hyperbolic.

The past three episodes of Lucha Underground have been a fascinating litmus test when taken together. Of course, mixed in with all of this Sexy Star title win talk is the tension in wrestling fandom with intergender wrestling. For some, it’s a barrier that they just can’t get past for reasons both noble and ignoble. These three episodes have helped me think more clearly about what I like and don’t like about men fighting women.

Keep in mind, this is just my perspective. I’m not trying to ban the matches that cross the line for me or anything of the sort. I’m just explaining my thought process and where my line is. Everyone’s will be different.

For the most part, I’m pretty comfortable with it as a concept, but occasionally I’d see something on Lucha Underground that would make me cringe or that I’d find objectionable. This three-episode run has been enlightening, because it’s given us so many intergender scenarios and allowed us to compare and contrast them. Because of that, I think I have a better handle now on what I think doesn’t work.

If I had to put an identifier on it, I would call it “realistic brutality.” There’s a line that can be crossed where what’s happening looks too real and looks too brutal and it makes me uncomfortable. It feels wrong.

Many proponents of intergender wrestling make the comparison to superhero movies as to why they think these matches should feature more heavily in promotions that are less sports-influenced. I think that comparison is apt and revealing of exactly my point here. There’s nothing realistic about a Marvel movie. When ScarJo is throwing dudes around and kicking butt, it never feels like I’m watching real violence. It feels fantastical.

When Yurei and Pentagon Dark are exchanging lucha holds and moves at a frenetic pace, it feels similar. It’s spectacular and stylized. I also thought it was the best of the three matches Pentagon had with the Black Lotus Triad on this last episode. It worked seamlessly. (Well, aside from a ring bell shot that Lance Storm would think was light.)

Contrast that with Sexy Star’s match with Johnny Mundo for the title that was the most uncomfortable I’ve been watching a match since Taya fought Cage. At one point, Johnny Mundo mounted Sexy Star and repeatedly punched her in the face and it put me off tremendously. It was too real, too violent, too brutal.

I thought it was as simple as that until I watched the match Pentagon had with Hitokiri. In this match, Pentagon whips a woman with a cable, then chokes her with it violently. He also soccer kicked her in the face. Yet… for some reason… it bothered me less than the Sexy Star match with Johnny Mundo.

This one perplexed me. Certainly, I was uncomfortable during this match, but much less so than the match with Sexy and Johnny. What was the difference?

Bas Rutten once said that he hates when people call MMA “violent.” He said violence is when you’re attacking someone that doesn’t want to fight or can’t. When you’re both trained and you agree to do it, it’s not violence, you’re testing skill.

I like that definition and I think it applies here. I think it feels more violent when it’s Sexy Star on the receiving end because the disparity between her and Johnny Mundo is so great. Here’s this woman who is small and relatively unathletic, given her peers, up against a large, muscled man who is sitting on her chest and beating her in the face. There’s nothing sporting about that. Hitokiri and Pentagon felt more like equals. It felt more like watching a competition than a crime.

It’s a complicated issue and I’m thankful for these three episodes because they gave me an opportunity to think deeply about it. That may not have been their intention, but I’ve never been one to digest media uncritically. (I mean, obviously. I’ve now written 2,000 words about a magic pro-wrestling show.) I’m sure I will continue to evolve on this and I’m glad we have companies all over the place pushing all sorts of boundaries. 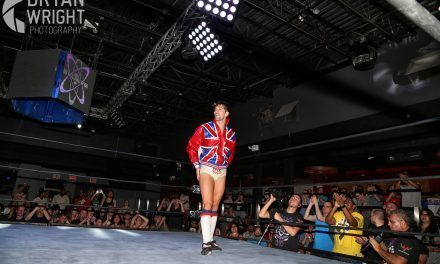