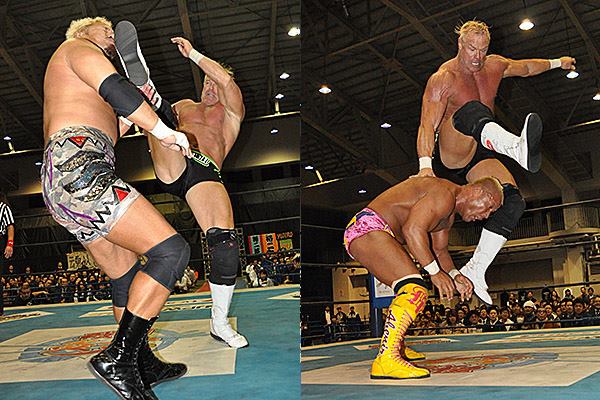 The first tournament matchup on Night 4 features a rare meeting between two heel units. They spent two or three minutes (it felt much longer than that) brawling on the outside, and the referee didn’t even bother with trying to count them out. Once it did get back in the ring, the action was rather uninspiring. There was a solid exchange between Bad Luck Fale & EVIL, which made me want to see a singles match between the two, but other than that, this match just wasn’t very good. SANADA made Bone Soldier tap out to the Skull End for the win. *¾

Something random that I’ve noticed, as the tournament has progressed, is that the A Block and the B Block are treated just like they are in the G1 Climax (at least for the shows early on in the tournament). The A Block cards usually feature commentary, depending on the location, and multiple camera angles, while the B Block cards are just a single camera show with no commentary.

Who’s ready for Mr. Ass?! Billy Gunn is back in tournament action with Yoshitatsu, and in a bit of a surprise, they actually defeated Togi Makabe & Tomoaki Honma, who won the World Tag League last year, and held the IWGP Heavyweight Tag Team Titles in the first few months of 2016.

Specifically, Billy Gunn pinned Honma after hitting the Fame-Asser. Coming into this tournament, when thinking about this Billy Gunn/Yoshitatsu team, I gave them a chance against teams with a part time guy on it, like Kenny Omega & Chase Owens, but I never thought they would be picking up wins against a team like GBH. Not only that, but this match was actually good. I kid you not. The action was solid, the crowd seemed to be into it, and as a whole, it was pretty entertaining. I don’t know what it was, but this match just worked for some weird reason. I have no real complaints about this one. ***¼

Adam Page & Yujiro Takahashi jumped Goto & Ishii while they were making their entrance, which led to Omega hitting a big dive to the floor, and Owens hitting Ishii with Omega’s broom. Once the match did get going, it turned out to be one of the best matches of the tournament thus far. There was some good (and very quick, at times) back and forth action throughout, and all four guys got a chance to shine. Goto, Ishii, and Omega were all great here, as you would expect, but Chase Owens deserves a lot of credit as well. He didn’t feel out of place at all in this match. Goto & Ishii got the victory after hitting their new tag team finisher, basically a GTR/Powerbomb combo (which looked vicious), on Chase Owens. ***¾

The success for CHAOS continued in the main event of Night 4, as Okada & YOSHI-HASHI defeated Shibata & Nagata in a battle between two teams who were both looking to get their first points on the board. This was another match that further solidified B Block’s superiority in this tournament. I thought this match was just as good as the match that preceded it, and honestly, both have a legitimate claim to being the best match of the tournament thus far (it’s a tossup for me). There was a lot of great action in this one. Okada had some awesome exchanges with Shibata & Nagata (the crowd was definitely into those encounters), while YOSHI-HASHI had his moments as well. When you have guys like this in one match, it’s almost impossible for it to be anything less than very good. Much like the main event from Night 2, this match went pretty long, but it was thoroughly entertaining nonetheless. ***¾

I know the World Tag League is usually the time of year when people here in North America tend to take a break from New Japan, but I think a lot of people have underestimated just how good this B Block really is. Sure, there was one stinker out of the four tournament matches on this card, but the other three were all incredibly solid. Makabe & Honma vs. Billy Gunn & Yoshitatsu was shockingly good (not spectacular, but definitely better than I was expecting), while the top two matches were easily the two best matches of the tournament thus far. Both of those matches are definitely worth checking out if you have the time. 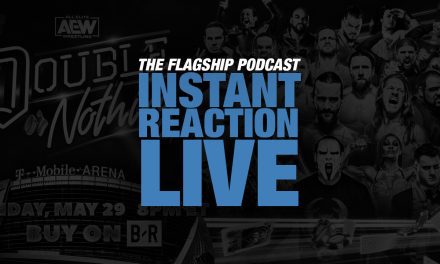 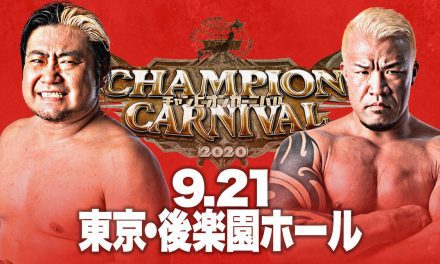