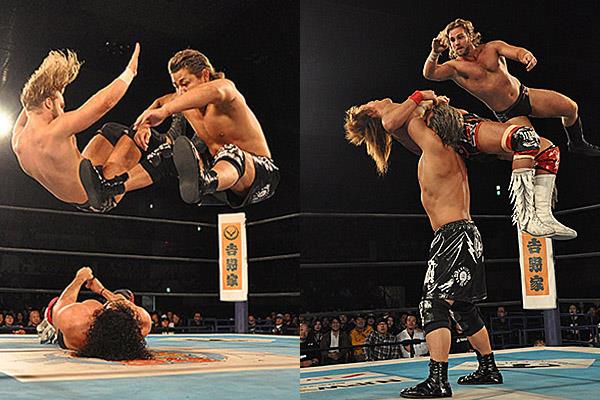 This new crop of Young Lions has struggled to capture my interest. We’ve all been spoiled by the prior generation of Yohei Komatsu and Sho Tanaka, and I’ve been spoiled even more by the ridiculous amount of youngsters that Dragon Gate is pumping out of their dojo. This was the first time that either of these men jumped out at me. Kanemitsu’s strikes are great. He spent the match winding back and popping Kawato in the jaw with forearms. Loved seeing that. Both men ended up with cuts around their mouth by the time the match concluded. Kanemitsu submitted Kawato with a Boston Crab, continuing his winning streak against Kawato. Kanemitsu is now 10-0-7 in singles matches vs. Kawato.

Oh boy, okay. This was a match. I understand that Race has connections to Harley Race and so he’s going to get a shot in Japan, and Breaker is a Race guy, so for something like the Tag League, he’ll get booked, but these two are no good. They don’t have the intensity that’s needed to work in Japan. This is a far cry from the Ron Conway’s of the world. They at least fit the mold. Breaker & Race are just two dudes that look entirely out of place in the New Japan ring. Race throws some of the weakest looking chops I’ve ever seen, as compared to the young Henare, who at least has some fire. Skip this one, folks. *3/4

This was way better than it had any right to be. It took them ten months to find their footing, but GOD has been perfectly acceptable lately. This match featured crowd brawling, which is typically something I’d hate, but this had two things going for it: 1) The Aichi crowd was hot. They liked the uncontrollable nature of this match and the intensity that War Machine, especially brought to the table. And 2) Tama Tonga kicked ass in this match. He was throwing himself around and subsequently off of his opponents. I loved seeing Tonga trying on a Tag League show.

Sadly, War Machine didn’t get the pin. Wrong decision. The crowd was into them, the crowd was hot, and then things fell flat as soon as GOD got their hands raised in victory. Super disappointing, considering that everything leading up to that was hot. Very enjoyable match. ***1/2

You read this result right.

I’ve done a lot of unspeakable things while being the Young Boy for Voices of Wrestling, but having to review this match might be the worst. It wasn’t fun-bad. This wasn’t a WMOTYC. This was just a bad match, with three of the wrestlers not giving a care in the world. I’ll give credit to Page, because although I think he’s a bore, he was at least trying in this match. Naito, Rush, and Takahashi, not so much. The Bullet Club goons pinned Rush, and I’m left speechless. Don’t watch this match. Spare yourself. *1/2

If there’s a major positive to this, it’s that the finishing stretch was red-hot. Robinson has officially arrived as a strong player on the New Japan roster. He’s at a point now where he can hang with the best of them, which is astounding considering where he was at the beginning of the year. I’ve loved seeing Juice grow as a performer throughout the year. I thought the middle of this dragged, which hinders it to a point that I can’t give it the full thumbs up, but this was a perfectly acceptable main event to a World Tag League show. Tencozy dropped Juice for the win. ***1/4

If you have a long term investment in New Japan, I suggest watching the opener between the two Young Lions. GOD delivered again, which is scary to say, and the main event was perfectly acceptable. As long as you skip the Bullet Club vs. LiJ tag, you’re good to go.

Thumbs in the middle, pointing down.