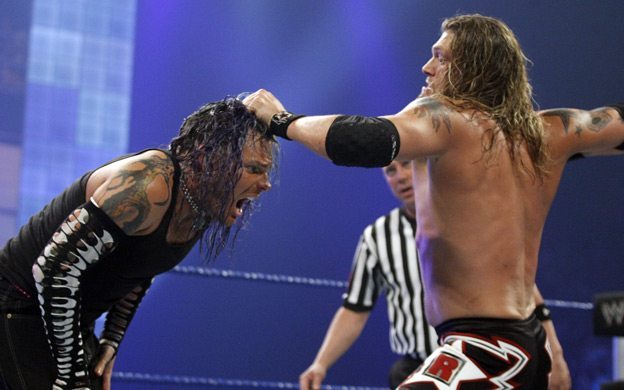 No column next week due to Thanksgiving. Good luck out there.

The podcast week in review, brought to you by Dollar Shave Club, start your free month using at DollarShaveClub.com/Voices!

VIP Lounge (11/13/16): After a week’s break, MVP and Alex are back to talk Dr. Strange, Luke Cage, TNA stumbling on, and MVP accidentally getting gored by “War Pig” Jody Kristofferson’s headgear. A couple of OK topics, but how do you just blow off the whole election, especially considering how often politics are discussed (they did say they would devote a full show to the topic at some point, but there was nothing here that couldn’t be delayed)? THUMBS IN THE MIDDLE

Conversation with the Big Guy #12 (11/14/16): Ryback and town drunk Pat quickly run down a litany of topics, including jerks at the gym, Ryback drinking during every night of an overseas tour (and paying the price), massage tables, the Shield taking Ryback’s heat, and more. Some ok discussion, although Ryback goes into more detail about massage parlors than I was wanting. THUMBS IN THE MIDDLE

The Card is Going To Change #22 (11/14/16): Road trip! Chandler and John take their new equipment to the studio…apartment of Colt Cabana. The crux of the interview is AIW’s involvement with all three editions of Wrestling Road Diaries. Everyone has good chemistry together and there are some funny stories of making a film on a lower level.  But the show is about double the length of the average TCIGTC and isn’t the better for it, and it may be me, but I’m burnt out on Wrestling Road Diaries audio. THUMBS IN THE MIDDLE

The Steve Austin Show #377 (11/15/16): Steve talks to Rob Croxall of the El Segunda Brewing Company about brewing beer. They also dump on anyone protesting the election. Croxall has been on a few times before, and I believe this is a new interview, but really, who can tell? The subject matter isn’t interesting to me, but Steve and Croxall also don’t do anything to make it interesting. THUMBS DOWN

Killing the Town #5 (11/15/16): No guest again this week (unless you count the terribly unfunny skit where “Bulldog” Bob Brown Skypes in from beyond the grave). This frees up Lance and Cyrus to talk about backstage fights, the ongoing feud with the Disco Inferno, and review an episode of ECW television headlined by a Lance interview (!). I liked the TV discussion, but the show is overlong at 80 minutes. THUMBS IN THE MIDDLE

MLW Radio #253 (11/15/16): Conrad Thompson sits in the hot seat this week, because 4 hours of him a week just isn’t enough. Interestingly, he plays the Bruce Prichard contrarian role here, as he rants against Goldberg’s presentation in the WWE and decries Joey Styles being fired from multiple companies. The guest hosts just tend to agree with MSL and Court, so this episode is far more interesting than usual. There are also some more agreeable conversations on Conor McGregor possibly appearing in the WWE and the current state of NXT. THUMBS UP

The Ross Report #144 (11/15/16): ROH announcer Kevin Kelly makes a return to the show. He’s ostensibly there to plug the upcoming Final Battle show, but they don’t get into ROH until the tail end of the interview. Instead we get into Kevin getting into the WWF during the Attitude Era and working with guys like the Rock and participating in the Brian Pillman gun angle. JR finds time to crap over that four-way IWGP junior tag title match that he called two years ago. Kelly is usually a fine guest, but as always Ross can’t get out of his own way. [Kelly’s interview starts at 21:48] THUMBS IN THE MIDDLE

Talk is Jericho #300 (11/16/16): To celebrate his big 300th episode, Jericho talks to legendary Black Sabbath guitarist Tony Iommi. They talk about the Sabbath glory days, Ozzy stories, a funny bit about Spinal Tap, various side projects like being in Jethro Tull, battling cancer, and more. This one takes a while to get going but definitely picks up at the story where Ozzy goes missing before a show. [Iommi’s interview starts at 9:04] THUMBS UP

Bischoff on Wrestling #17 (11/16/16): Nick and Eric run down the news, and then they’re joined by Bruce Prichard, who won’t be overexposed at all this week. They talk about Bruce and Eric’s unlikely friendship, Brian Pillman, Steve Austin, producing WCW, getting into the podcast game, and more. OK show, but Eric and Nick are no Conrad when it comes to interacting with Bruce. [Prichard’s interview starts at 11:01] THUMBS IN THE MIDDLE

Ric Flair Show #20 (11/16/16): The Nature Boy is missing this week filming a commercial, so Bruce Prichard is filling in this week. The format of the show is largely the same, but instead of an interview we essentially get a mini Something to Wrestle With as Bruce recounts Ric’s numerous runs with the WWF/E, so we get to hear about early negotiations in the late 80’s up through Ric’s retirement match with Shawn Michaels. Odd to have a Ric Flair show without Ric Flair, but everything was Flair related and this was enjoyable. THUMBS UP

Art of Wrestling #325 (11/17/16): Edge finally gets a full fledged appearance. Given this is the Art of Wrestling, not surprisingly the bulk of the show is about working the indies and trying to make it to the WWF. You hear about Sexton Hardcastle, working against Meng and Kevin Sullivan as enhancement talent, getting a shot against Bob Holly, and more. There’s also a bit about adjusting to life after wrestling and his relationship with Vince McMahon. Very enjoyable episode, and credit to Colt as he’s actually quite funny during the interview. THUMBS UP & BEST OF THE WEEK

The Steve Austin Show – Unleashed! #378 (11/17/16): Steve talks to Ted Fow—wait, Becky Lynch is the guest this week! She and Steve have a lengthy conversation that jumps around quite a bit; they talk about getting trained by Finn Balor, making her way to NXT and developing her character, being a flight attendant, working heel, and a lot more. It’s a pretty basic interview (Steve admits he didn’t do a lot of prep for this one), but Becky is such a likeable interview it doesn’t matter. [Lynch’s interview starts at 8:58] THUMBS UP

Jim Cornette Experience #155 (11/17/16): We get some more of the usual topics: Vince Russo and Donald Trump (intertwined, actually). Then Jim does a deep dive into the whole Joey Styles saga and goes hard at Mike Quackenbush and Jeremy Botter. Then Kenny Bolin checks in about his health and a weird situation where he’s feuding with Nova over a $50 bet. A lot going on this week, not all of it great. [Bolin’s interview starts at 59:06] THUMBS IN THE MIDDLE

Keepin’ it 100 #20 (11/17/16): The show opens with a lot of banter about politics, then Kevin Kleinrock is up to talk turmoil in AAA, then Diego Sanchez talks some more MMA and his wrestling fandom, football talk, Shane Helms talks UFC, Juvie discusses the hottest women in wrestling and rate random songs, and we wrap up with talk about Vince Russo’s crazy recent comments and the ongoing war with Killing the Town. Decent enough show, but I have to say no one does a better job of ad reads than Konnan and Disco. THUMBS IN THE MIDDLE

Talk is Jericho #301 (11/18/16): A special live show, as Jericho is joined by Christian at Caroline’s in New York City. There are lots of stories about the times Christian worked with Jericho in the WWE (ass cream is thankfully mentioned) as well as the highlights and lowlights of Christian’s career. Noelle Foley helps out with the Q&A for some reason. The live setting doesn’t help Jericho, who comes across as jittery, but Christian is such a talented storyteller it doesn’t drag the show down at all. [Christian’s interview starts at 3:48] THUMBS UP

MSL & Sullivan Show (11/18/16): A fairly short opening segment sees a discussion of boxing doing better angles than wrestling and the immediate future of Goldberg. The bulk of the show is taken up by a lengthy Q&A session discussing all sorts of topics, such as stuff ribs, super heroes, and using mystery challengers for titles. Amazingly, Sullivan reveals his plan for Starrcade ’97 was to have Bret cost Sting the match against Hogan. A recap of the second half of the 12/30/96 Nitro closes out the usual solid show. [The Nitro review starts at 41:18] THUMBS UP

Something to Wrestle With #16 (11/18/16): Vader’s 1996-1998 run in the WWF is the topic of this show. They cover everything you would hope to know about – weight problems, Shawn Michaels’ tantrums, Kuwait, Vader losing his mask, his eventual departure, and the Mastadon’s odor. Conrad at some point just bursts out laughing at some of Vince Russo’s booking. Another three hour show, but to be honest it goes by fairly quickly, even after all the other appearances Bruce and Conrad have made this week. THUMBS UP

Burning Spirits #4 (11/11/16): The gang runs down the finals of the Big Japan Saikyou tag league, the Danshoku Dino vs. Shuji Ishikawa KO-D title match, and even some Pioneer Pro Wrestling. 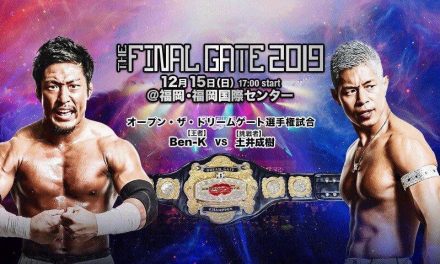 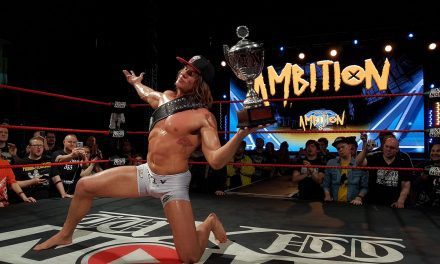