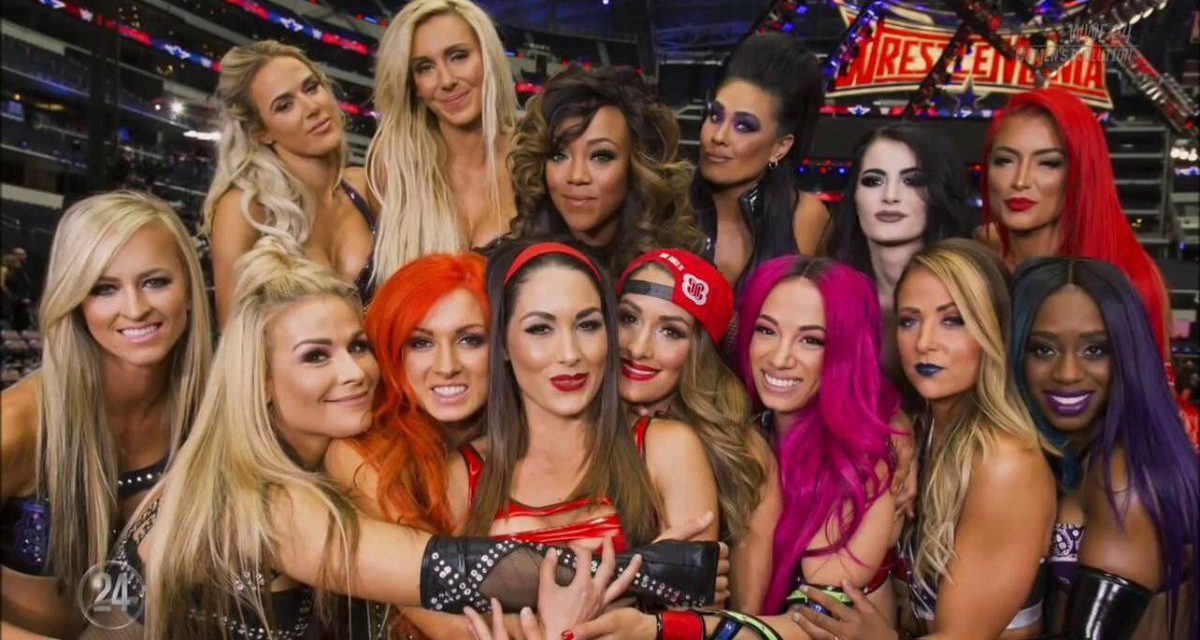 Oh hey guys Total Divas is back and it is NOT KIDDING AROUND.

There is so much inside baseball in this episode I’m not sure where to start, and it more than makes up for the emotional slog that was Total Bellas.

First of all, Lana is here and, as was teased on Total Bellas, she is not in character — no bun, no suits, no accent. It’s borderline disturbing, to be honest, to hear a voice that is Lana’s and yet not Lana’s coming out of a face that is very much Lana’s. Like eating salsa that’s just a little bit too spicy — part of you is crying for it to stop, and another part of you just keeps cramming it in your mouth because it’s so good.

Lana, as it turns out, is an amazing addition to the Total Divas cast for a couple of reasons, one of which is that she isn’t afraid to say “I told you so” (back to that in a moment) and another of which is that she is deeply insecure about her WrestleMania debut match and keeps seeking counsel in Natalya, who is taking a tough-love approach to helping Lana through the experience.

When Lana asks Nattie over to look at her ring gear, Nattie locks up with her to test it out and then starts lecturing Lana about making sure her cleavage stays put.

When Lana expresses some insecurity, Nattie doubles down.

“This is your very first match, in front of a hundred thousand people. You’re gonna forget everything, and you’re gonna be so scared you’re not gonna know what hit you. You’re gonna look like a deer in headlights,” she says. “I’m not trying to be rude. I just don’t want you to f–k this match up. You feel me?”

What Lana is not feeling is a decision made by Trinity/Naomi (who is back in the cast, praise the wrassling gods), who, after knocking back a few drinks, decides that two nights before Mania is a good time to let Paige color her hair. Lana is joined in her criticism by both Usos:

Paige’s “layers” start much closer to the scalp than those that might have been cut by a more competent hairdresser.

All the while — and all the next morning when, in the cold light of day, Trinity realizes the extent of the damage that has been done — Lana keeps up a string of commentary so in-character that she almost lapses into her Russian accent at one point:

Trinity eventually gets her hair fixed, and everyone seems set for WrestleMania at that point, although Lana is still incredibly nervous, and for some reason still going to Nattie for reassurance. Sitting in the makeup chair, Nattie gives Lana a warning about seizing her moment: “We might never get another WrestleMania moment again. We don’t know what’s going to happen. There is talk of Armageddon.”

Yes. That’s the PEP TALK she gives Lana before her DEBUT MATCH. At WRESTLEMANIA.

Since this happened in April, we all know Lana didn’t humiliate herself in the ring, and Total Divas even makes Lana’s in-ring debut look slightly less unimpressive than it was in real life.

Hey, speaking of people who don’t have accents, you know who does have one? Maryse. You know what else she has? Allllll the drama with the Bella Twins, whom she claims screwed her over when they came back to WWE.

As Maryse tells it over dinner with the rest of the Divas, when the Bellas came back to WWE, they were made an offer that was also extended to her. The three of them, she says, agreed that they would hold out for more money, but then the offer was rescinded and the Bellas went behind her back to get a contract without her.

The result: Major drama, and they haven’t spoken in three and a half years.

I wonder if they will clash repeatedly throughout this season of Total Divas?

“I just wish everybody could just get along, but I know that’s not gonna happen,” Trinity says. And thank goodness, because how boring would reality TV be if it did? (We know the answer to that question, by the way; see: Mandy and last season’s weak attempts at wrapping her into drama.)

Thinking there’s a glimmer of hope for reconciliation, Renee Young invites Maryse to dinner with Paige and Brie, and things escalate almost immediately. Some words are said (including about how Daniel Bryan never liked Maryse, which — ouch), Maryse’s role as the villain is cemented, and she storms out of the restaurant, all while Renee and Paige sit in awkward silence.

See, according to Brie, WWE decided they didn’t want Maryse back with the Bellas after all. She claims she fought for a contract for Maryse — until she was told to give it up because Maryse had been fired and wasn’t wanted back.

“I couldn’t even get the Divas Championship when I went back to WWE, let alone block someone’s contract,” Brie says.

Some other things happen, including yet another argument between Brie and Nikki, but we got enough of that on Total Bellas to last a lifetime. Oh, we also learn that Eva Marie can’t navigate a Japanese menu without her husband due to her mayonnaise aversion:

“I don’t even know how to order a sushi roll that I like. I have to ask Jonathan.”

All this plus lots of high-tension slow-motion walking-into-the-fire footage AND cameos from John Laurinaitis, Roman Reigns, Emma, Tamina Snuka, Corey Graves, Apollo Crews, the rest of the women’s roster, and the world’s biggest box office star, Dwayne “The Rock” Johnson. No joke.

Also, I know you’re wondering about the elephant in the room. Yes, the Divas season premiere includes a scene in which Chief Brand Officer Stephanie McMahon announces the retirement of the Divas name, as well as backstage reaction footage of Nikki Bella’s face when Lita unveils the Women’s Championship.

When it comes to reality TV, though, it appears these Superstars will remain Total Divas.