Before we begin the review of Night 1, a bit of a programming note: throughout the tournament, our reviews will feature only the World Tag League tournament matches. This means we won’t be covering various six-man tags on the first half of the show. We understand this will leave out some interesting matches like today’s young lions opener, however in an effort to maintain our collective sanity during this busy time period both in life and at this website, we’ll only be covering tournament matches. Thanks for your understanding.

Oh, this War Machine run is going to be a lot of fun.

The Ring of Honor products, Hanson and Rowe, acclimated themselves to NJPW, Korakuen Hall and the World Tag League quite easily on Night 1. Understanding they needed to be as impressive as can be from jump, War Machine literally didn’t waste one second getting everyone’s attention. Hanson and Rowe jumped Henare and Nakanishi from the opening bell. After tossing Nakanishi to the outside, they turned their attention to poor young lion Henare. The big men tossed Henare to the outside with the intention of landing onto his partner Nakanishi. Well… Nakanishi did his best Miz impression, catching Henare with maybe a finger tip or two, causing him to crash violently to the floor. As if that wasn’t enough Hanson followed that up with a suicide dive taking both men out and exploding the Korakuen crowd. THAT is how you make an impression, folks.

Henare and Nakanishi (mostly Henare) were able to muster up a few hope spots here and there but this was an extended squash by War Machine who finished Henare off with the Fall Out. ***

In a mild upset, the relative unknowns of the tournament, representing Missouri’s WLW promotion, Brian Breaker and Leland Race, took down the Bullet Club duo of Yujiro and Hangman Page. I hadn’t seen much of Breaker & Race before this match but I came away somewhat impressed. They aren’t going to blow you away but similar to the roving cast of NWA talent that populated NJPW over the last few years, these guys will bring inoffensive, solid, well-worked ** matches each and every night. There’s a baseline for guys like Breaker & Race and if this was it, we should see more fun matches over the next few weeks. **

I think we may have officially turned the corner. This was yet another decent Guerrillas of Destiny match — paced and worked well. Something clicked with this duo and the days of them being avoid at all cost are over. Phew. I honestly believe the speed of their work is key to this change, the days of sullen, slowly stalking GoD matches are in the rearview and instead a quick-paced Tonga matched with the powerful Loa has made for a dynamic shift in this team’s prospects.

There’s not a ton of breakdown about this match, it was at its core a classic TenKoji tag match with hissing Tenzan strikes, Kojima machine gun chops and a definitive win by Kojima nearly taking Loa’s head off with a lariat. **½

As reported by thecubsfan & luchablog.com earlier in the week, X was CMLL’s Rush, a more-than-welcome addition to the World Tag League and hopefully beyond. The crowd popped immediately at his reveal and the announcers seemed very excited about him being the mystery partner. Rush fits immediately into Los Ingobernables and could be a fun member that pops in from time-to-time.

The match itself was just… okay. Being the main event of the show it got plenty of time which may have done it a disservice as it started hot, ended hot but unfortunately had a big chunk of nothing in the middle. It also didn’t help that Tanahashi was a complete non-factor forcing Juice to take a bulk of Rush and Naito’s offense while at the same time having to carry the load for his team. I won’t rag on Tanahashi since this is what he’s always done and it’s all so he’s 100% ready for an epic Wrestle Kingdom match but it’ll be disappointing if he’s this disengaged throughout the tournament.

Regardless of his teammates effort level, Robinson did well for himself, getting the crowd into his every move throughout. In the end, the more in-tune Los Ingobernables got the better of Juice & Tanahashi. Keep an eye out for Naito & Rush, they have a potential clear path to the WTL Finals and may get there undefeated. **½

Welcome to the World Tag League —inoffensive but largely forgettable tag matches. Get used to this for the next few weeks, people. 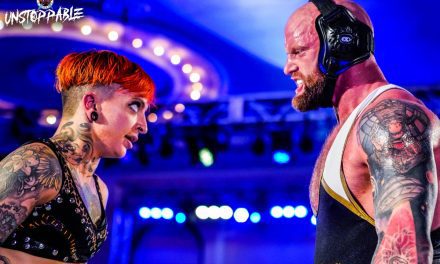