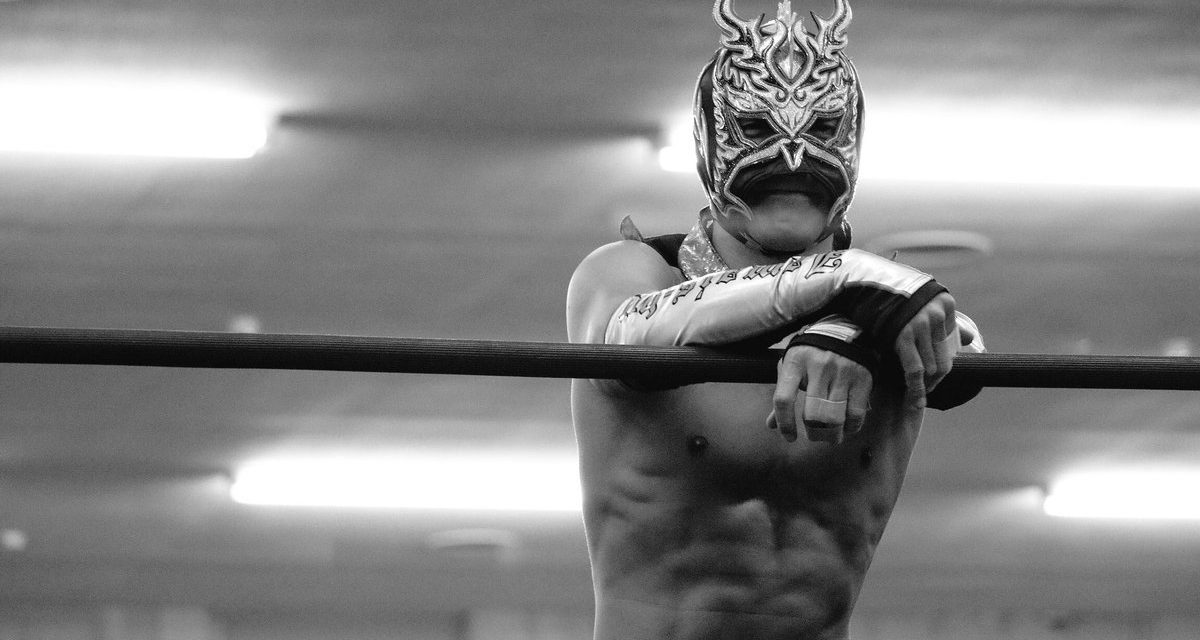 This is inoffensive, fun professional wrestling. The interactions between Don Fujii and the younger members of the roster have become so intense recently that I wonder whether or not it’s the typical puro trope of the youngsters jumping the veteran, or if there’s something more to it. The Watanabe’s, Ishida, and Yamamura seem to have way too much hate for a man that singlehandedly brings in the housewife demographic. Other than that, there’s not much to discuss. Saito won with the SaiRyo Rocket, which crashed and burned into The Former Punch Tominaga. **1/2

“Yuki Yoshioka went first. He only recently debuted, but his goal was no less than becoming the best wrestler in Dragon Gate.
Katsumi Takashima said he received his official debut date, and he will do his best to show off his abilities.
Shun Watanabe has become the masked fighter Shun Skywalker. He is going to spread his wings and fly high over the Dragon Gate ring.
Futa Nakamura is now Ben-K. The name is a play on the Japanese word 弁慶(benkei), which means powerful person. His unbelievable power will help him reign supreme.
Hyou Watanabe decided to keep with his name. Hyou also means leopard in Japanese, so he adopted leopard print ring gear. He is the smallest of the new class. But he knows he is the best. He will move like a leopard and promised to become Brave Gate champion.” (iheartdg.com)

If Dragon Gate ran Smackdown, this is what most matches would look like. It took a little over six minutes for the current Open the Brave Gate champion to the young wildabeast, but don’t let that length fool you – Watanabe hung with the champion in this match. It was clear that he wasn’t on Eita’s level, and throughout the entire match he was simply trying to catch him by surprise and grab a victory, but these six minutes did so much for both men.

Something about Eita’s Brave Gate run has felt off. It got off to a rough start with “brother” YASSHI at Dangerous Gate, which might be why, but in the two months that have proceeded, he hasn’t recovered. This reminded me of the real Eita; the lovely gentleman that brought back llave style and the great grappler that can snap on a submission from any position. This was that Eita. It was great to see. For Watanabe, this was the first time he’s doing anything besides attack Don Fujii. He had life! He had passion! He had leopard print trunks! This is a blue chip prospect, friends. He put up a fight only to tap out to Eita’s brutal armbar. Really fun stuff. If you’re interested in Dragon Gate’s future, this is a must-watch match. ***1/4

Very rarely does Dragon Gate swing and miss, but this Shun Skywalker getup is a strong thumbs down. It’s a complete disaster. He’s wearing two different shades of green and the …attire… doesn’t fit him properly. I hope this was a rough draft, because the name, while being dorky, works with the promotion. This outfit, however, works for no one.

This match ruled. If the prior match felt like the opening match to a Dragon Gate Smackdown, then this was the main event. Perfectly tame, not a MOTYC, but packed full of action, heart, and heat. This Ben-K kid, the former Futa Nakamura, is on another planet. He is better than 2004 Shingo Takagi. He’s better than 2015 Kazusada Higuchi. This is a superstar in the making, and as Kay noted on the latest episode of Open the Voice Gate, someone that will probably be leading his own unit in five years. My only issue with him is that now that he’s wearing Hirooki Goto cosplay attire, some of his more stationary power moves look less impressive and it’s quite literally because we can’t see his thighs. The Argentine Backbreaker doesn’t work with this current outfit. It loses the “wow factor”.

Susumu & Kagetora are as consistent as it gets. They turned up the heat and delivered bangers with Shingo & Naruki Doi in September, then again in early November against CIMA & Dragon Kid. Here, they toned it down a little, and yet they still were completely engaging. This is an elite, top tier tag team. Amazing match. Arguably the first “great” match for Ben-K and Skywalker. ***3/4

“CIMA imparted some advice onto the 5 rookies. Today, a new chapter of Dragon Gate begins. Today, they are in Korakuen Hall. Korakuen Hall is a special place. Matches in Korakuen Hall have a special kind of pressure. If you mess up here, you don’t get a second chance. 20 years ago, CIMA was in their position. A rookie with aspirations of being the best. Welcome to Dragon Gate. The current generation, the next generation, the old generations, and now their generation. They all have doors to open. He offered a handshake to Hyou but he slapped his hand away. They backed CIMA to the ropes. CIMA attempt to remain defiant while clearly terrified. He challenged them to a 10 man tag next month in Korakuen Hall against himself, Mochizuki, Gamma, DK, & Fujii.” (iheartdg.com)

Well hot damn, this was quite the sprint. At age 46, I’m determined that Masaaki Mochizuki is one of the five best wrestlers in the world. He hasn’t had many chances to put on singular displays of greatness this year, but when he’s had those opportunities, whether they be against T-Hawk in May, or Big R Shimizu a month later, he’s delivered. This wasn’t a particularly memorable Dragon Gate six-man. There have been thousands just like this. That being said, Mochizuki’s performance blew me away. No one has the endurance he does, and amazingly, no one has the intensity he does either. He’s truly the ironman of professional wrestling.

I liked the way this was structured. It made sense with the context of the current storylines. Team Mochi is unaligned and has yet to feud with anyone, and the Tribe Vanguard side (plus Yoshino) is quite friendly. This was a greatest hits match, with a hint of added intensity from Mochizuki and Shimizu. Shimizu dropped his former Dia Hearts unit mate, Kzy, with the Shot-Put Slam to end things. ***3/4

I take back all of my negative words about Kotoka. He kicked so much ass in this match. Everyone did. This was what Dragon Gate is best at, and why it is such a beautiful promotion. These emotional multi-man matches are the best thing in wrestling. VerserK is dastardly, and not in an evil, mustache-twirling way, but in a way that makes you want to not only avoid the bar that they’re in, but any bar on that block. The last thing I want to do after watching this match is bump shoulders with T-Hawk on the street. VerserK was so vicious and calculated, and as a result, this match was one of the best matches Dragon Gate has had to offer all year.

The (mostly) unaffiliated babyface side played their roles to a tee. I have reservations about Naruki Doi as a babyface, but this was an exquisite display of wrestling from him here. His chemistry with Takagi and T-Hawk was top notch. This was a great start to his road of revenge. Dragon Kid ruled. He was the wildcard here, and it was a breath of fresh air. He blew the lid off of Korakuen after nailing Takagi with a Springboard Hurricanrana down the stretch. The deep two count was a thing of beauty.

The real star here, as mentioned previously, was Kotoka. Even though he was still draped in black face paint and dawning the VerserK tights, there was no doubt that Kotoka was looking for blood. He was bullied by the real VerserK – the ones that are bigger, stronger, and more successful. T-Hawk was disgusted to even be in the same ring as this guy. Lindaman was younger, but still more accomplished than him; why did he have to put up with this “Blehhh” shit? The disrespect didn’t stop Kotoka from giving everything he had. His fight throughout the entire match, from brawling with T-Hawk in the very beginning, to surviving a brutal onslaught from Shingo, to his eventual demise at the hands of El Lindaman was beautiful. This match was outstanding. ****3/4

“YAMATO said he hasn’t forgotten his anger towards Doi from when he helped kick him out of Verserk. 6 years ago, Doi accepted the Dream Gate challenge from YAMATO when he was still a young kid. The situation was reversed now, so he would return that favor. He accepted the challenge. Also, wasn’t it getting a bit cold out?
Doi was confused. YAMATO noted it is almost December. There are two Korakuen Hall shows left. Doi was still lost.
December! Korakuen! Naruki Doi!
????
December! Korakuen! Naruki Doi!
????????
YAMATO said that Doi knew what he meant, and the fans were waiting for it. Doi was irritated that the Dream Gate talk had ended so abruptly, but he got an answer so he would let it go for now. Fine. It was tradition,after all. At the 12/01 Korakuen he would bring Doi Darts, to set the main even for the final Korakuen Hall of the year.” (iheartdg.com)

A possible, low key Show of the Year Contender with Dragon Gate’s Brand New Gate. It depends on what you value. I don’t know if there’s been a more enjoyable card this year. The undercard went barely over an hour, the semi-main event trios sprint was nothing short of a spectacle, and the main event was a MOTYC. This was a textbook of what a Dragon Gate Korakuen Hall should be. Outstanding stuff from the crew.