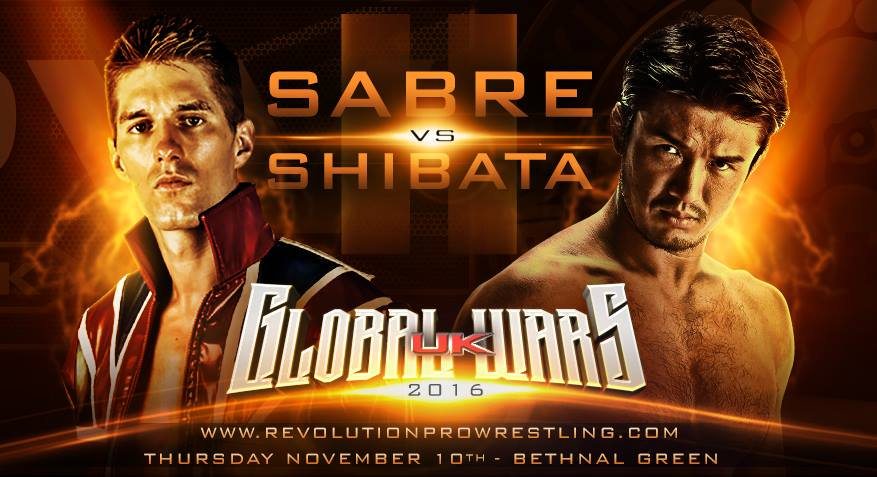 RevPro returned to London for its fifth and final York Hall show of the year last Wednesday for the first leg of its set of joint shows with NJPW: Global Wars UK. While neither Okada or Tanahashi were anywhere to be found, a diverse cast of nine NJPW wrestlers (ten if you count Ospreay) were coming over for two very fresh feeling cards mixing together a unique blend of British, Japanese and American talent.

The show started late due to more stringent than expected security checks, and as such there were a lot more people standing than usual so it was harder to judge how many people were in attendance. It was a four figure near sell-out going in the day of the show though, so with the added walk-up they would have been close to, if not at, capacity which is fairly impressive for a mid-week show.

This was a fun opener to start the show without being anything blow-away. Liger is always super-over in the UK from the moment he steps through the curtain, so these two worked a smart match centered around Liger’s key spots withouy the need to wrestle particularly impactfully. They managed to conserve their bodies for night two and get by on charisma, which you can’t really complain about when one of the guys in the match is in his fifties. Scurll won with the Crossface Chickenwing. **3/4

When this match was announced the British wrestling fan base let out a collective “huh”. It’s a match that I’d put money on nobody ever having thought about until it was announced; it’s a totally bizarre worlds colliding type deal. It worked though. Samuels’ over-the-top heel persona when mixed with the super-babyface Honma really lent itself to a fun match, with plenty of both hit and missed Kokeshis. The perennial underdog picked up the victory after some misplaced interference from Samuels’ Revolutionists stablemate James Castle left him open to a top rope Kokeshi. ***

Nagata was replacing the injured Michael Elgin on this tour. This was set up to be a really big two days for Dunne with two big opportunities against two NJPW stars in Tomohiro Ishii and Nagata here, but this didn’t end up being the start he would have hoped for. The whole match just felt a bit off, the two guys never felt like they were comfortable working together and there were a handful of awkward moments where it appeared a lack of good communication caused the two guys not to be on the same page. There was enough positives for me to say this was still just about a good match, but it fell well below expectations and was all in all fairly unsatisfying. Nagata won with his bridging back suplex. ***

This was exactly what you’d expect from these two: trope filled; hard striking; no selling; elbows, lariats, more elbows and brainbusters. And God damn it was glorious.

When you spell the Ishii formula out like that it seems like something that should get old and boring after a couple of times of seeing it, but Ishii does it so well and so compellingly that it drags me in almost every time. When some wrestlers no sell they’re doing exactly what it says on the tin: they’re not selling the effects of a particular move. Ishii doesn’t do that. When he ‘no sells’ he does sell the impact of the move but instead of just lying there he sells it on his face and he sells it in his stumbling and he sells it in the roar he lets out while rising back to his feet and refusing to give his opponent the satisfaction of being able to see they’ve been able to floor him.

Oh, and then on the other side of things you had Chris Hero going through an unprecedented multi-year run of in-ring excellence. I think it’s safe to say he more than held up his side of the bargain here too. For ‘the Ishii match’ to work it requires a compelling beatdown to be laid on him, and there are very, very few people ever who are as good at putting together a captivating heat segment as Chris Hero is in 2016.

In a way this was a paint-by-numbers Ishii match, but it was a damn great one and I absolutely adored it. Hero finally won the war of attrition with his Gotch-lift piledriver, which was something like the fourth or fifth piledriver Ishii had taken to that point. Brutal. Gloriously brutal. ****

After a critically acclaimed performance by BUSHI at Power Struggle my expectations for this one were heightened, so I have to say I was a little disappointed when the match ended up being good but relatively unspectacular. Perhaps it is just because I’ve been spoiled by great match after great match from Ospreay at the York Hall in the past, because this was a very fluid and smooth match with no really glaring obvious negatives but for whatever reason it really just failed to hook me to any great degree. Ospreay beat the recently former IWGP Junior Champion with the OsCutter. ***1/4

There’s something about Trent Seven. Perhaps it is because he’s a little older than a fair chunk of the current BritWres scene or perhaps it it is just the way he is, but he always seems super comfortable in whatever position he’s put in. While many of the British wrestlers (somewhat understandably) seem to get very tense and feel a need to wrestle a NJPW-style match when getting a big opportunity to go against a Japanese talent, Seven seems relaxed and quite prepared to play to his own strengths. While many would have taken the uber-serious approach here, especially opposite the current intercontinental champion, he appeared cognizant of the fact that he was in a six man tag leading into Shibata and Sabre Jr. and going on after Hero and Ishii had just torn it up, and as such steered the match in a more lighthearted direction. I mean seriously, Naito transitioning his eye taunt into a moustache twirl was exactly what this match should have been and was.

All six men looked great here, but David Starr deserves a special mention for how quickly he managed to get over and how seamlessly he slotted into the LIdJ style multi-man. He looked completely at home squaring off with the ungovernable trio, and honestly came off looking like the best of the bunch which I would not have predicted going in. A really fun semi-main which succeeded in everything it attempted to be. EVIL picked up the pin on Starr after hitting the EVIL STO. ***1/2

While many seemed to adore it, I was left fairly cold by the first match from these two earlier this year in which Sabre Jr. retained. While I enjoyed the grit  brought to the opening grapple exchanges, I felt it never really progressed from there or hooked me in, and come the finish I was just left fairly cold. While I did prefer this encounter, I was still left with a lot of the same complaints combined with the extra negative of the majority of this match just feeling like a straight recreation of their previous match.

Again it started well, but after the initial exchanges it just meandered and didn’t build for the vast majority of the contest. It wasn’t until the last three minutes or so until it really got going and eclipsed their previous match, and this felt very much like it was coming from Shibata’s side with him taking control of the match going into the closing stretch. I understand that they were going for a non-traditional match feel and structure, but it just didn’t connect with me in any strong fashion for the bulk of the match. They went for the story of Sabre making the mistake of trying to out-tough Shibata rather than trying to stick to his wheelhouse of targeting a body-part and working towards a submission and it cost him, which when spelled out sounds like something I’d enjoy but they didn’t really do enough to make the match feel purposeful. Overall this was a good but not great match, which has to be marked down as another disappointing main event to end Sabre’s title reign. Like their prior encounter though, I’m sure many will enjoy it more than I did.

Perhaps more newsworthy than the match itself though was the result, with Sabre’s 299 day title reign coming to an end via a vicious PK. This result came as somewhat of a shock to both most in attendance and those who follow RPW closely given that Sabre is still entwined in a long-term storyline with Marty Scurll who still holds a shot at the championship in his back pocket. ***1/2

Post match Sabre was booed by portions of the RPW crowd, something that has been growing for a few months due to a combination of disappointing matches as champion and him employing a more heelish demeanor, which then intensified when he refused to accept Shibata’s post-match handshake and left with Marty Scurll while flipping off the crowd.

Then out to close the show and face off with new champion was Chris Hero, fresh off his win over Tomohiro Ishii, and their match for night two was turned into a title match and bumped up to main event.

Global Wars UK was a good show highlighted by a fantastic match in Chris Hero vs. Tomohiro Ishii and backed up with a plethora of other good accompanying matches. Looking at the card beforehand it probably didn’t quite live up to expectations, but it’s a very easy watch and sets the table very nicely for night two. RPWonDemand is well worth a purchase this month, as this would be a solid purchase in its own right and night two (set to drop at some point later this week) is a must watch show.