This was relatively tame for a Dragon Gate opener. Punch Tominaga is now bald, and has fully developed into an egg. I get hungry just looking at his head. Sadly, Tominaga’s egg-like qualities are the best thing he has going for him. He was clearly the least talented man in the match. Even Yamamura, who has been lapped by his partner, Ishida in terms of progression, stood out as being far more talented than the man who pinned CIMA at Dangerous Gate in a singles match two years ago.

Shun Watanabe, who debuted on April 21st, pinned Tominaga in this match. I don’t think anyone saw this coming, I know I didn’t, but now that it happened, it makes sense. This is Tominaga’s role now. This was a strong outing for the three young boys. With their talent and the recent disbandment of Monster Express, I could see these youngsters finding spots in units relatively soon. **1/2

This is a far cry from Shachihoko BOY taking it to Shingo in Korakuen Hall. This was harmless comedy from the master of comedy, Stalker Ichikawa, and a fun showcase for Kzy and Maria. There’s nothing to note here other than that after five minutes of silliness, Kzy pinned Ichikawa. NR

Lindaman is still heartbroken. He’s handled his breakup with Yosuke Santa Maria terribly, and now he’s hanging around Sketchy McSketchy, Mondai Ryu, both in the ring and outside by the school dumpsters. Rumor has it that they both smoke Lucky Strike.

The match itself was a ton of fun. Linda mainly worked with Fujii, who is reaching a new level of grumpy. I don’t know what triggered this, but I’m all for it. There’s a tremendous visual of Fujii giving Linda sumo slaps as they run across the balcony. This was proceeded by the two trying to throw each other off of said balcony. Fujii does this a lot, he’s done it since 1999 when he debuted in Toryumon. To my knowledge, he’s never thrown anyone off a balcony, but he’s getting up there in age and my biggest fear is that eventually, someone will suffer a major plummet at the hands of Fujii.

Mondai Ryu, believe it or not, helped this match reach the next level. He’s the best powder-thrower in DG’s history. No one has the dramatic timing he does. He went for a deadly powder throw to Gamma, but Fujii pulled him off the apron. Moments later, after miscommunication between the two veterans, Ryu delivered a strike straight to the face of Gamma. Lindaman took advantage and dropped him with a trio of suplexes to pick up the pin. ***1/4

This was Eita’s third defense of the Open the Brave Gate Championship.

When Eita returned from his excursion in Mexico in late 2013, he was soon followed by the debut of one of Mexico’s best flyers, Flamita. The two climbed up Dragon Gate’s ranks as a part of the Millenials, with Flamita gaining credibility by having one of the most successful Brave Gate runs of all-time in the spring and summer of 2014, while at the same time, Eita found tag success with then partner T-Hawk. Since the dissolution of their unit a little over a year ago, the two have had very little contact up until now. This first time singles match featured well-rounded performances from both men.

Ultimately, I do think the work was a slight disappointment. The match was still good, and on the surface it was a reminder that Flamita is the best flyer in wrestling. No one has the body control he does. He flew around the ring gracefully, maintaining the originality that made me fall in love with him in the first place.

This match failed to reach the next level due to Eita, more than anything. I should be clear that I don’t think he was bad. In 2016, Eita’s worst is slightly above average. He had great chemistry with Flamita, but I didn’t feel like up until the very end, he was ever in a position to win. Flamita’s arm was never targeted to a great extent, leaving me underwhelmed when Eita slapped on Numero Uno and forced the former DTU standout to submit. I wanted more drama as the match hit the finishing stretch. This lacked an oomph that would have made it truly memorable. ***1/2

This is the same deal that we get on every big Dragon Gate show now. The modern incarnation of the Triangle Gate titles aren’t meant to steal the show, or even be on display as much as the Twin Gate belts, but the titles have a legendary lineage of innovative, fast-paced gems.

This might fall short of being a “gem”, but I can certify this as a hoot. The three things to note here more than anything are that,

This was great. Tons of drama, tons of spots, and a ridiculous closing stretch. This is the modern Triangle Gate match in action. ****

The bubble of western Dragon Gate fans is very small. It’s a fraction of what New Japan brings to the table. In that very small bubble, there’s a new trend of hating CIMA and it’s the worst. CIMA is an elder member of the roster, and at age 39, he’s not exactly one of these prospering young talents I keep talking about, but let’s not act like CIMA is anything less than stellar. I have zero qualms with he and Dragon Kid winning this match. Susumu & Kagetora are great; I love them both. I have no doubt in my mind, however, that CIMA and DK are going to kick ass with gold strapped around their waist. CIMA looked like a million bucks. He’s still so quick, and miraculously has top notch chemistry with everyone on the roster.

It should be noted that Susumu busted out the World Liner on Dragon Kid in this match, just like the one he did ten years ago in their Kobe World main event. Very few moves look cooler than the World Liner. That was all for not, however, as DK was able to recover and eventually pin Susumu with an Ultra Hurricanrana. Super fun match. ***3/4

Be on the lookout for Kagetora and a possible Brave Gate match soon. He’s been protected a lot since the Summer Adventure Tag League.

This was it. Tozawa’s farewell tour came to a close here, and at least for the immediate future, this is the last we’ll see of Akira Tozawa in a Dragon Gate ring. The prior farewell tour matches had been a little underwhelming – it felt like they were doing the greatest hits, and because of the blurred unit lines, I felt very little emotional attachment towards them. Here, with The Big 6 squaring off, which included a brief SpeedMuscle reunion, YAMATO and Hulk bickering with Takagi, and Akira Tozawa’s last war cries, I was completely invested. I also happened to be an emotional wreck while watching this. Things start slow, but by the time Takagi and Tozawa are doing their worst to each other, I was completely sucked in. This was a beautiful match for Tozawa’s farewell. God speed, my friend. ****1/2

Akira Tozawa is the most important Dragon Gate wrestler of this decade. He left for excursion in early 2010, and when he came back just over 12 months later, the promotion, in a way, became his. His interjection into the Blood Warriors vs. Junction Three feud took the feud to the next level. He and BxB Hulk kicking CIMA out of Blood Warriors and starting the most successful heel unit ever, Mad Blankey, became a centerpiece for the promotion throughout 2012 and 2013. Monster Express has a personal impact on me. Seeing Tozawa aligning himself with Ricochet, Uhaa Nation, and Masato Yoshino made me the fan I am today. It’s not disappointing that Tozawa is leaving, it’s disappointing that Tozawa is leaving before winning the big one – the Open the Dream Gate Championship. I wanted that moment so, so bad. That’s now a moment that we might not ever get.

Jae, who is nothing short of a saint, translated the Graduation Ceremony. Even if you’ve never seen Dragon Gate, and you’re just hearing about Tozawa through his connections with WWE, this is required viewing. Nothing tops a Graduation Ceremony, even if you don’t speak the language. Enjoy. 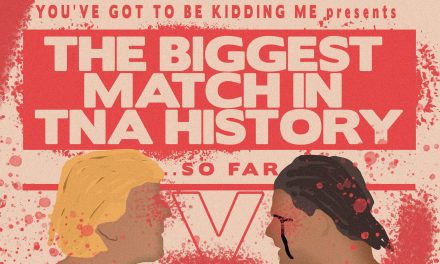