This week on Tiger Mask W we get not one, but two battle royal matches!

It’s an action packed episode with some time differences that don’t entirely make sense (we’ll get to that later). Both Tiger Mask and Tiger the Dark face huge challenges in this episode. The stakes aren’t anywhere near as big as they were last week, but that leaves more room for fun. You can watch this week’s and all the previous episodes of Tiger Mask W over at Crunchyroll and if you want to find the rest of my recaps, you can do that here.

To kick things off we’ve got a bit of confusion because I think that something was lost in translation. Yuji Nagata (the head of New Japan in the cartoon universe) makes an offer to Tiger Mask “for us to join the series.” This could mean a couple of things to me. Initially I thought it meant that Nagata offered TM a spot on the New Japan roster, but stuff that happens later in the episode makes me think that this isn’t the case. I would guess that the most likely answer is that Nagata offered Tiger Mask a spot on this tour of shows. Either way, Naoto accepts the offer as a way to gain more experience.

The next day at the show, Nagata tells Tiger Mask that the tickets sold out because he was added to the card. Maybe NOAH could book him to bump their numbers. Speaking of bumping their numbers, certified number bumper, Kazuchika Okada welcomes Tiger Mask to the New Japan crew. They shake hands and we cut over to the merch table. While fans wait for their turn to buy NJPW stuff, nobody wants to buy a keychain from Fukuwara Mask, a member of the grimy cartoon universe indies that found his way onto a New Japan card. He’s a regional wrestler and New Japan brought him in because they’re working in his neck of the woods. Togi Makabe makes his series debut to ask Fukuwara Mask how he’s doing at his gimmick table. Sales start to turn around once Fukuwara Mask suckers Tiger Mask into helping him by offering a free TM handshake to anyone that buys a keychain.

Later in the night, Fukuwara Mask (known as “the god of laughter of Tohoku”) takes on a young lion. I want to say that it was Ryu Wakamatsu, but with his somewhat generic look, it’s hard to tell if it wasn’t just another young lion. The comedy wrestler straight up steals Yano’s rope break to open the match. He then continues to rip off Yano when he spends a bunch of time on the outside and causes his opponent to get counted out. The fans are pretty thrilled with the outcome while Tiger Mask just seems befuddled by the whole thing. In the back, Fukuwara Mask gives Tiger a keychain as a thank you for helping him out at the gimmick table earlier.

Tiger Mask’s match comes up on the card and his opponent is Tomoaki Honma, who is making his Tiger Mask W debut. There’s no real polite way to say this, but cartoon Honma looks like a monster. Just straight up horrifying. Luckily, he doesn’t look like a racial caricature like drawings of him have in the past. We join the match in progress and Honma is looking to end things with the Kokeshi. In true Honma fashion, he misses and then Tiger Mask finishes him off with a German suplex. These fans are pretty lucky that they got two singles matches on what seems to be a random house show.

Meanwhile in America, Tiger the Dark reads about Tiger Mask’s exploits backstage at a GWM show. In his match, TD takes out his rage on his opponent, resulting in a ref stoppage. Two of Tiger the Dark’s fellow wrestlers note that because TD is going so hard in his matches, the veterans of the promotion have been taking it out on them. On his way to the locker room, Tiger the Dark is stopped by three wrestlers that don’t like the style he’s working. The ringleader, Bosman, looks like Zangief and has vertical scars on his forehead that you could stick quarters into. Bosman crushes an oil drum that’s in the hallway with a bear hug to intimidate Tiger the Dark. We’ll see how things go when they meet in the ring later.

Back in Japan, Tiger Mask and Ryu Wakamatsu (who shockingly isn’t dead after the beating he took last week) look at the card for today’s show and remark that they’ll both have to wrestle twice because of the battle royal that will close out the show. We cut back to America where the GWM equivalent of the Royal Rumble is about to begin. The fact that these shows seem to be running at the same time even though the New Japan card begins at 2pm Japan time really doesn’t make sense. I guess kids aren’t going to question math when it comes to time zones. Anyways, Bosman gathers together a bunch of GWM wrestlers to make a plan to beat up Tiger the Dark in the battle royal. If Kevin Nash were here, he’d probably call the group a bunch of vanilla midgets. Tiger the Dark’s friends try to warn him of the ambush, but he welcomes the challenge.

The twenty man GWM battle royal begins and it’s no surprise that Tiger the Dark drew the number one entry slot. That sneaky Bosman rigged it! Over in New Japan’s battle royal, all of the entrants are starting off in the ring. It’s a pretty star studded affair with entrants like Okada, Hiroshi Tanahashi, Togi Makabe, Tomohiro Ishii, Tomoaki Honma, and Yuji Nagata. The match is rounded out by Tiger Mask, Fukuwara Mask, and Ryu Wakamatsu. The venue this takes place in is Korakuen Hall and this makes Tiger Mask W the second Japanese show I’ve watched this year that had an episode in this building. The first was an early episode of Animal Sentai Zyuohger that had a slight wrestling theme.

Fukuwara Mask asks Tiger Mask if this is his first time in a series and now I’m thinking that a series is referring to this battle royal. In the future, Crunchyroll should really have someone that knows wrestling look over the translation before they release the show. The prize for winning the battle royal is Tohoku rice. It’s an odd prize, but who am I to judge. Things start off hot with Nagata and Ryu being eliminated via pin after a bunch of wrestlers pile on top of them. Fukuwara Mask gestures to his head to show Tiger Mask that a match like this is more about brains than skill. Ishii and Honma start chopping the hell out of each other. Honma is still unsettling to look at.

We cut back to America for a short bit to show Tiger the Dark eliminate a wrestler. The commentator tells us that ten more men still have to enter the match. Over in Korakuen Hall, Ishii and Makabe wrestle each other over the top rope, resulting in a double elimination. Immediately after that Tiger Mask rolls up Honma and pins him for the second time in less than 20 minutes. Fukuwara Mask tries to sneak up on Tiger and pin him, but he manages to kick out. In America, three wrestlers gang up on Tiger the Dark, chopping him and kicking him in the stomach over and over.

The New Japan battle royal takes a surprising turn when Okada is eliminated, leaving only Tiger Mask and Fukuwara Mask in the ring. Tiger Mask lands a kick to the face a little harder than he meant to, busting Fukuwara Mask open from the nose, covering his mask in blood. This show really lives by the red means green philosophy. Over in America, the match is down to its final four as Bosman enters the fray. Tiger the Dark takes a pretty brutal beating from the three other men before we go back to Japan where Fukuwara Mask isn’t joking around anymore. The blood has entirely changed him as a wrestler, upping his intensity to a level we never knew he was capable of. Fukuwara Mask almost tosses TM out of the ring, but Tiger Mask is able to reverse it and then plants him with a Tiger suplex to win the match. Tiger Mask wins the rice!

In GWM, Bosman tries to rip off Tiger the Dark’s mask and that’s when he’s had enough. TD kicks away the two men holding him, knocking them both out of the ring with ease. Bosman goes for his bear hug, and crushes his opponent for a while before he tries to drive him into the corner post. Tiger the Dark breaks out of the hold and kicks Bosman in the face, reopening one of his many scars. Blood actually squirts out of the wound and it’s pretty gross. Bosman charges at TD and jumps right into a Darkness Driver, which ends the match. In the back, Ms. X (GWM’s promoter) looks on and says that Tiger the Dark can now ascend higher on the card.

We fly back over to New Japan where Tiger Mask checks on the health of his opponent. Fukuwara Mask is showering off after the match and we see that his body is covered in numerous scars. Tiger Mask asks why he hides his true strength, but Fukuwara just laughs and says that he was in it for the rice. We see his face and it seems like it might be a big reveal, but I’m not quite sure. If anyone reading this knows what the deal with this was, I’d greatly appreciate you passing on the info. While he rides his motorcycle home, Naoto looks down at the keychain that Fukuwara gave him and reflects on what he learned.

After the particularly serious and bloody episode we had last week, it was pretty nice to have a fun show this week. Hopefully we’ll get to see more of the cartoon universe indie wrestlers as the series goes on. We might actually get to see some next week. Or Tiger Mask might fight some teen girls. I’m not sure which it is, the promo was really vague. 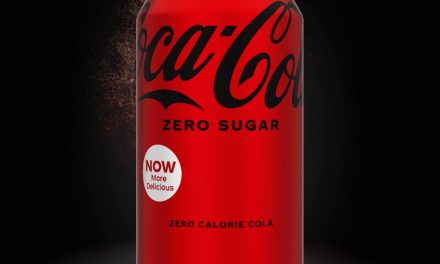 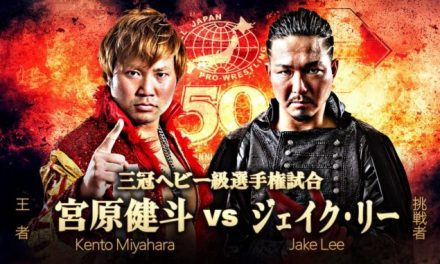