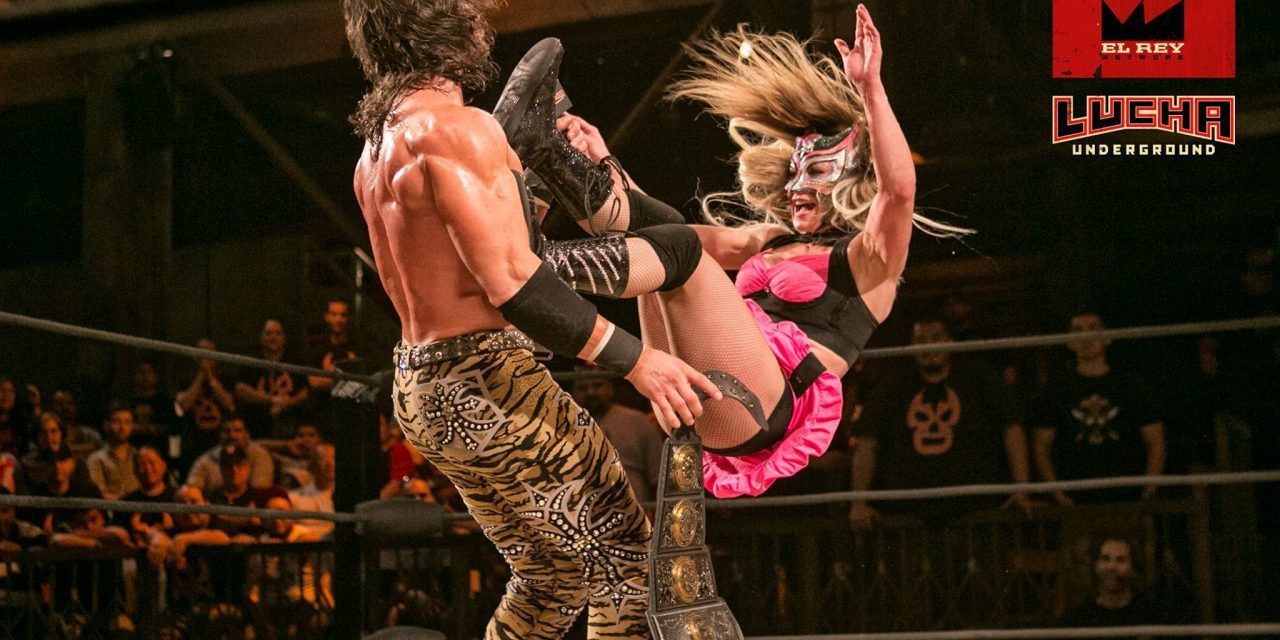 In my younger days, when I was a single man, there was a point in time where a couple young ladies had caught my eye. Normally, this was not a dilemma, you take them individually out to a seafood dinner; one you continue seeing, the other gets the Champ Kind treatment. However, this time it was different… they lived together. I, being no King of Banter, couldn’t pull off dating them both, even casually. I would have to make a decision and stick with it.

I made my decision based on a little chemistry I picked up one evening out with friends. We had a great first date and things seemed to be off in a great direction. Quickly, though, reality set in. The personality clash was drastic. We went together about as well as peanut butter and bleach. Hanging out at their place, seeing the comparison with her roommate close up, I realized something.

I picked the wrong woman.

When tonight’s episode of Lucha Underground was filmed, I have to imagine that Chris DeJoseph sat behind a monitor in some dark corner of the Temple and had the exact same thought. Watching Ivelisse and Sexy Star open and close the show with intergender matches, the contrast was clear. One of these women deserves to be pushed near the top of the card, the other should be pulling the curtain. Unfortunately for Lucha Underground, they too made the wrong call.

Ivelisse opened the show with a match against Marty the Moth. As soon as she walked out, knowing Sexy would be in the main event, I knew this was a bad idea. The show has been pieced together from random tapings all season, there’s no reason they couldn’t have called an audible here and moved this match to a different episode. They certainly should have. Putting these two in similar matches on the same show practically forced the audience to directly compare them.

Ivelisse looked like she belonged and had a solid match against Marty. It felt believable. There was no reason for Matt Striker to lecture us about the inherent virtue of the match because you might not have even noticed. (It didn’t stop him, of course.) Ivie’s kicks looked great, the two worked together well, I was able to get into the match with no problem. She hung, as she often does, and fulfilled well her role as David in this underdog match.

I’m not saying it was match of the year or anything like that, but it was a pretty good opener. You put Son of Havoc or Killshot out there and you would’ve got pretty much the same match. Ending it with a big new debut to the live crowd certainly helped, even though I’ve never been crazy about Sami Callahan. Admittedly, I’ve not seen too much of him, so I’m keeping an open mind. I did dig his initial run-in here. The booking of having him get beat down and needing saved is questionable, but I can’t hold that against him.

As good as Ivelisse looked in the first match, Sexy Star looked twice as bad or worse in the main event. I said last week I had a morbid curiosity for this match and unfortunately, I couldn’t even really enjoy this match for its badness. It was just bad.

At one point Vampiro brought up Karl Gotch, which is about the same as mentioning Picasso while someone sharpies a mustache onto a subway movie poster. Johnny Mundo looked like he was moving in molasses to allow Sexy Star to keep up. He slowed everything down, but did the same moves, which only accentuated the disparity here.

The crowd got into the near falls once the Worldwide Underground came out and got involved. They clearly had been watching some New Japan tapes; I got a strong Bullet Club vibe from the whole rigmarole. I can’t say I didn’t pop for The Mack coming out to give everyone a Stunner, that was the bright spot here for me. When it was all said and done, Johnny Mundo needed tons of interference and brass knuckles to beat Sexy Star. Had she kicked out of that last pin, I think I would’ve sent my remote into the wall. It was just silly. Not that there isn’t plenty of other silliness on the show, but this match was terrible.

They wanted a top female star in a promotion with no gender division and I think that’s great. I am totally on board with that idea. However, I could not be less on board with the woman they chose. Looking at the individual performances here tonight, is there any doubt who the better performer is? Is there any question who they should be pushing?

Ivelisse showed that she has the physicality to hang with the guys and put on watchable matches. Sexy Star showed an inability to do even the simple things right. The latter is in the main title picture, the former is set to wrestle a manager at Ultima Lucha. It is completely backwards.

The middle of tonight’s episode should not be neglected, as it was surprisingly good. We got to see Councilman Delgado again, as he met with Dario and announced the “Descension” was complete and asked if Dario had a host ready. Turns out, this other god who is coming to the Temple will not be a debuting worker, but will inhabit someone who is already there, namely the winner of the Cage/Texano series. An Ultimate Opportunity, indeed…

I actually got more invested in the match the two had tonight because we knew what was on the line. That kind of dramatic irony is something I find compelling. They don’t know what they’re fighting for, but they know they want it. We do know and perhaps question whether the winner will be fond of his prize. Simple, but interesting.

The match itself was pretty good with Texano coming out on fire to try and put Cage away. He was desperate to get a win and save himself from being swept and you could feel it. Striker even managed to sell that facet of the match well here, the lone positive thing I can say about him on tonight’s show.

Last week I praised Striker and Vampiro on commentary for adding to the show. This week, it was everything I said last week only the exact opposite. Striker in particular called attention to himself repeatedly, detracted from the matches, and annoyed me to no end. He even brought back the “to the victor goes the spoils” line, only this time he was referring to women as property and not overtly implying rape, so… progress?

All in all, this was not a great episode. Nothing was especially noteworthy and the best match on the show was pretty good, but unremarkable. If nothing else, it did at least serve to show us how misguided the Sexy Star push has been, which I suppose is interesting in its own sort of way.