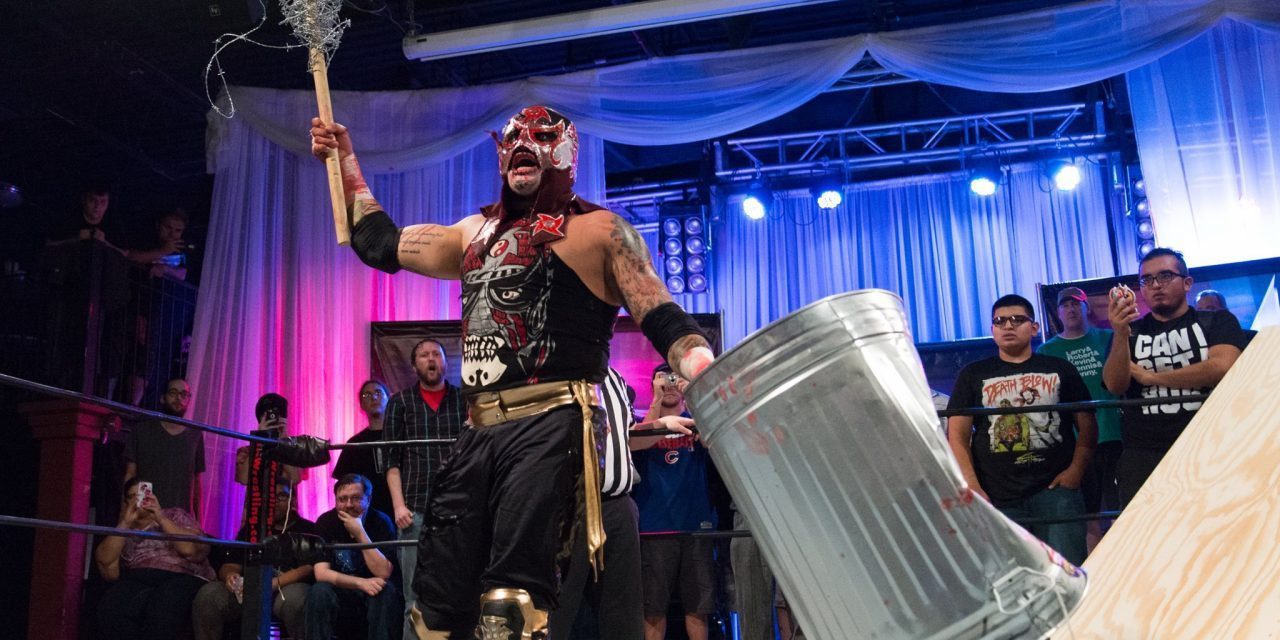 Logistically, I have some issues with this match. This show was stacked with nine scheduled singles matches and for some reason, AAW decided to open up the show in front of the hot Merrionette Park fans with a subpar women’s match that is inconsequential in the grand scheme of things. I’m not sure why, if anything, they didn’t put this on the second half of the show instead of having a lame duck tournament match. These were two bodies that weren’t needed on the show.

This was Cruise’s debut in AAW. She has experience dating back to 2008 with SHIMMER but did nothing to impress here. She towered over Lovelace, and because of that, they worked the simplest match possible. Lovelace fought back against the giant and in the end, put her away with a back senton that came nowhere near connecting with Cruise. *3/4

I can’t help but feel like these are two guys that would have such a higher output if they honed in on their craft and didn’t bite each other’s pensis. Maybe that’s just me.
To be fair, Vega is having the best year of his career in his fun tag team with Mat Fitchett. Even with that in mind, I couldn’t help but roll my eyes at some of the “comedy” that was attempted in the early goings of the bout. Normally Taylor connects with me, but this bombed. I will give props to Taylor for his long term selling (of his penis, after it was bit). Once the comedy died down, this was two competent wrestlers have a fine match. Taylor picked up the victory after an Awful Waffle. **3/4

Fitchett rules. He’s been floating around on the indies for years now, but this year, and specifically since his match with Drew Gulak at Homecoming, has been on another level. I hope the work ethic he’s had this year continues, because every time he’s out there, he’s busting his ass to have the best match possible. The other thing to note about Fitchett is half of his matches in AAW this year have been against The Hooligans or OI4K, and he’s still going out there and killing it. Now, after Night 1 of the Jim Lynam Memorial Tournament, we can add Silas Young to the list of guys Fitchett can work well with.

Fitchett was a ragdoll for Young and it’s not that Silas is that much bigger or stronger, but he works like a bigger guy and Fitchett played that up perfectly. There was a clear difference in attitude between the two, and that really helped this match. Silas was mean, and Fitchett was the perfect foil to that. I loved the finish as Silas started his Finlay Roll to lead into the Pee Gee Waja Plunge, but Fitchett reversed the momentum and pinned him with a Crucifix Pin. Super fun match. Maybe the best Silas has looked all year. ***1/4

Cage was originally supposed to wrestle Josh Alexander, but Alexander was stopped at the border and it appears he won’t be able to be back in the States anytime soon. Cage’s opponent was announced as a mystery and would be announced at match time. Gregory Iron, arguably the worst commentator of the year and mediocre professional wrestler (note: I’ve heard nothing but good things about him as a person) answered the call. After cutting a long, and somewhat entertaining promo, he was powerbombed viciously by Cage. Iron was carried off, leading to an ACH surprise return.

This match was hindered by two incredibly awkward communication issues. Twice, ACH and Cage mistimed spots and it let to very noticeable “spot calling”. If you take out those two moments, this was a very fun match and for two guys that can be excessive, they kept this pretty tame. Cage didn’t put out with any ACH power spots, leaving ACH’s speed and flight as his main source of attack. His speed won out in the end as he rolled up Cage for the three count. This could have reached higher level had it not been for two very, very awkward spots. ***1/4

Jesus, Cabana looked great here. He falls into a routine during his indie appearances—focusing on minimalist wrestling and comedy spots—but this was motivated Cabana. He looked like he did on his NOAH tours in years past. Zack gets touted as a master of the British style, but I don’t know of a wrestler that appreciates classic British wrestling and the World of Sport style more than Cabana (excluding those that actually worked WoS, of course). That was clearly on display here as he worked more of a classic British style match than what we normally see Zack work. Yes, there are obvious influences of WoS in his matches, but Zack is a hybrid of so many styles.

There was an intensity to this match that I wasn’t expecting. Like I said earlier, Cabana was focused here, like this was a big deal. He’s spent his year working multi-man matches in AAW and a one-off with Shigehiro Irie, but this was the first match that he really seemed like he could sink his teeth into. Zack submitted Cabana with a disgusting arm submission. This was a breath of fresh air for both men and the show as a whole. Well done. ***3/4

AAW teased two big returns on social media leading up to the show, the first being ACH replacing Josh Alexander and the other, “All Ego” Ethan Page returning to the Chicago promotion to take part in this tournament.

This was such a one-sided performance. Page was a base for Ali’s outstanding moveset. He landed a handful of power moves, but this was a showcase for Ali to lead into a second round match on Night 2. This match, to me, made it obvious that this was a one night return for Page. He was positioned in no way, shape, or form to look strong. It looked like a humbling performance for Page. Ali looked great and I can’t wait to see him on Night Two. ***

Cobb is a very interesting wrestler to watch because there is no one like him in modern wrestling. If you haven’t seen a lot of Cobb, or any Cobb at all, the best comparison I can give you is Alexander Otsuka of Battlearts fame. Otsuka and Cobb both share a background in amateur wrestling.

Gulak was tossed around in a way that was almost shocking, seeing as how Gulak controls so many of the matches he’s in. Even though he’s not the biggest guy, he grinds his opponent to the canvas and takes control that way.

Here, he attempted to do the same thing, and for a portion of the match that worked, but Cobb was far too big to be kept down by Gulak’s grappling. The great thing about that is that we got to see the best side of Gulak, the stiff-striking, aggressive side of the Legal Eagle that isn’t shown off enough. Cobb finished off a hot finishing stretch with a fancy powerslam to put Gulak away for the three count. Jeff Cobb, I love you, but please get a new finisher. The powerslam is lame.

That being said, this was a match with its ups and downs. The matwork in this match was boring, and a major letdown considering how hot the match started. I thought we’d get Gulak working a sprint, which is his speciality. The quicker he works, and the faster he jumps on his opponent, the stronger he looks. He started out the match like that, but sadly took things to the mat and it didn’t work in this match. I didn’t mind the match as a whole, but a hot finishing stretch is always going to help things. I can see how some would be bored by it. ***1/4

AR Fox, before last week, had been ousted from the WWN Universe and hasn’t made his way out to Reseda in almost two years, leaving him to work under the radar indies and companies such as Beyond and FIP that gain some coverage, but aren’t gaining major buzz. That leaves AAW as his home promotion in a way, and I’d safely say the biggest indie he works. His run as AAW Heritage Champion has been outstanding. On the other side of the ring, there’s Rey Fenix, a man who quit working for Mexico’s AAA promotion—in the process killing his Lucha Underground career—because he was being treated better in companies like AAW, and has proudly proclaimed AAW as his home promotion. Lots of pride on the line here.

This was exactly what you’d expect. Put AR Fox and Rey Fenix in a ring, and what you think you’d get is what you got. The two flipped around for under ten minutes in an artistic way, creating organized chaos. Fenix is a special talent, one that will hopefully continue to progress as he gets older. Fox, as I mentioned earlier, has had a really good year for working a weird batch of promotions. Fenix won after dropping Fox with a modified Tombstone Piledriver. Look at the names, and if you’re into that, give this match a look. ***1/4

This is the second ever singles match between the two, with the first happening last year at IWA-MS.

I went into this with high hopes and possibly unrealistic expectations, and ultimately this was a slight letdown. I think a big difference between this match, and their prior match, which I loved, is that in AAW, Kong is nowhere near the level that Hero is at. Hero has been their MVP this year, with matches vs. Drago, Fenix, Trevor Lee, and Drew Galloway, among others, has delivered a number of high caliber matches this year. Kong, for as talented as he is, scored a largely forgotten win over Moose in March, and since then, has floated around in multi-man action since then. In IWA-MS, Kong was their champion, and a legitimate threat to a world class athlete like Hero.

Because of that, the back-and-forth offense between the two did little to excite the crowd. On commentary, Gregory Iron droned on and on, and when Kong would deliver big, impactful moves, he’d deliver insightful commentary such as “Ow!” or “That had to hurt!”. He’s a detriment to the product.

Hero put Kong away with the Gotch Style Piledriver. I did find it interesting that Hero had to use everything in his arsenal to put away the giant. None of Hero’s elbows or boots could knockout Kong, nor could the rarely used Hero’s Welcome. Kong, by the end of this match, was in a better spot than when he came in. Hopefully this is the start of Kong becoming a bigger name on the indies. ***1/2

This was about as lame as you can get. This supposed deathmatch was a lot of Sami Callihan doing uninspired, tired weapon spots. This was reminiscent of a Jimmy Jacobs vs. BJ Whitmer match from ten years ago, but minus the intensity, emotional attachment, and innovation. This wasn’t actively terrible, but when you look at the talent up and down this card, it is hard to accept this as a viable main event.

This just felt tired. I understood what they were going for, but I failed to connect with it in any way, shape, or form, which has been the case for most Sami Callihan main events this year. The two worked hard, and in the end Pentagon won with a Package Piledriver, which was the right result. Legos, barbed wire, and unprotected chair shots were all involved. This was just another indie brawl, one that you’ve seen before, and one that you’ll see again. **3/4 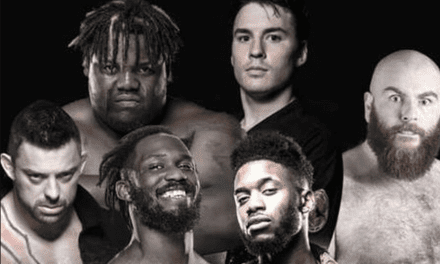