Last week we were treated to the premier episode of Tiger Mask W. This week we not only get the second episode, but we get a real life wrestling match in the dark match of King of Pro Wrestling. Remember, if you want to watch the show for yourself, you can do that over at Crunchyroll.

The episode begins with Kazuchika Okada and a New Japan young boy discussing the match that Tiger Mask had at the end of last week’s show in which he defeated the Global Wrestling Monopoly’s Odin. Cartoon Okada seems as affable as real life Okada. This scene confirms what I’ve always assumed about the amount of trophies in the home of a successful Japanese wrestler. There has got to be a point where you get tired of being handed trophies.

Elsewhere, the GWM leader, Miss X, and her ridiculously gigantic breasts send Odin back to the Tiger’s Den. She exposits that the last Tiger Mask dismantled the Tiger’s Den many years ago. Her plan is to execute the current incarnation of Tiger Mask in the ring to keep history from repeating itself.

Naoto, the Peter Parker to Tiger Mask’s Spider-Man, sees a special report that about the next GWM show. Tiger Mask is being challenged by a wrestler named Black Python. In the great tradition of super heroes like Black Lightning and Black Goliath, Black Python is a man with an African background. It’s not a choice I would have made, but different things work in different cultures. Naoto isn’t sure how to respond to the challenge, but his friend and manager, Haruna, tells him that she will handle it.

Yuji Nagata makes his debut on the show when he steps into Okada’s office. Okada has never really seemed like the kind of guy to have his own office to me. The transition to this scene is fairly abrupt. Judging by the conversation the two men have, Nagata might be in charge of booking talent for the shows. Based on his having an office, I would assume that Okada is a higher up in the company in this cartoon universe.

At a press conference, Miss X officially challenges Tiger Mask and introduces Black Python to the press. Haruna interrupts the proceedings to demand that GWM thanks Tiger Mask for saving their main event. Haruna and Miss X argue over who will put on the proposed match because Haruna refuses to have it in a GWM ring. I’m betting that NOSAWA would find his way onto the Tiger Mask Produce show. The argument is interrupted when Yuji Nagata steps onto the stage and proposes the match happens in a New Japan ring. Nagata offers Black Python and Tiger Mask the semi-main event spot on a show on Ryogoku, which is accepted by both parties.

Back at the NJPW offices, Nagata is being congratulated by two young lions for making the deal. This announcement has boosted ticket sales. Nagata smells the money to be made with Tiger Mask and requests him for a contract signing prior to the Ryogoku event, but then he has an even better idea and phones both ladies to negotiate. The Miss X end of the phone call was a lot more… um… wet and nude. Obviously Nagata would just so happen to call as Miss X was stepping out of the shower. She wasn’t wearing a towel so there was a lot more sideboob than I probably would have put into a kids show.

Putting that aside, both women go to Nagata’s office and are not happy with the phone calls they had with him. Nagata not only wants the contract signing, he wants both Tiger Mask and Black Python to compete in a tag match against each other. Typical New Japan booking. Miss X says that Tiger the Dark will team with her man. Tiger Mask doesn’t have any allies yet, so Haruna is at a loss for a partner. Nagata offers a young lion as a tag partner and, much to the displeasure of Naoto, Haruna accepts.

On the day of the show, the GWM crew rolls up to the venue in a white limo while Naoto, sans costume, rides up in his motorcycle. The show is sold out and the fans are excited. In the backstage area, Nagata tells Haruna that they can sell Tiger Mask merch if they have any. Nagata explains that there is a ton of money to be made as Haruna mulls over the possibilities. Just like last episode, we get a look at wrestling business from this show that I never expected to get. The emphasis on the business side of things might be the most interesting aspect of the series.

In the locker room, Ryu Wakamatsu (the young lion teaming with Tiger Mask) gets a pep talk from Okada. The Rainmaker tells Wakamatsu to outshine all the other performers. This is his home company, the other three are the outsiders. Tiger Mask walks into the room to meet his partner for the first time. With just a simple handshake, Okada is able to tell that Tiger Mask is as young a wrestler as Wakamatsu is. Meanwhile in the GWM locker room, Miss X tells her boys to beat the hell out of the young lion and to steal the show. She wants GWM to leave its mark on New Japan as punishment for all the money they’re making.

Just prior to the match Tiger Mask asks Wakamatsu if there are any special rules for tagging. This is his first tag match, but I would assume that any wrestler going into their first match of any kind would know how tag team matches work. Strangely enough, this is the first time in the series that I have a hard time suspending my disbelief for.

The match begins with Tiger Mask and Tiger the Dark in the ring, neither of them knowing that they used to be students of the same teacher. Red Shoes calls for the bell and the match begins. The two men seem evenly matched before they both tag out. The young lion doesn’t fare so well as Black Python and Tiger the Dark double team him in the corner. Wakamatsu looks to be in trouble after a backbreaker/knee to the chest combo by the GWM team. Their experience together is clearly helping here. They both knee him in the stomach before Red Shoes forces Tiger the Dark to leave the ring. Black Python gets the young lion in a bow and arrow as Tiger Mask stands on the ring apron, allowing Wakamatsu to break the hold on his own.

The young lion hits Black Python with a spear and dives into his corner, tagging in Tiger Mask. The men trades holds until Black Python gains the advantage with a kick to the back. BP tries to throw Tiger Mask into the turnbuckle with an overhead double underhook suplex, but with catlike agility, Tiger Mask lands on the top rope, springs off, and kicks Black Python in the head in a way that completely defies gravity. After a German suplex, Tiger Mask gets a two count. Tiger Mask slams his opponent to the mat with two more Germans, causing him to beg Tiger Mask for mercy. Tiger the Dark steps in to stop the fifth German attempt. TM wrestles TD into the corner and tells Wakamatsu to tag in. The young lion rushes in and covers the incapacitated Black Python to get the three count!

Nagata reacts negatively to the result, seeing as one of the two men in his Ryogoku semi-main was just beaten by a young lion. Okada, on the other hand, is thrilled with the victory for New Japan. Tiger Mask tells Miss X that her wrestler is of no use and that she needs to bring him someone stronger. Miss X announces Black Python’s replacement as the strongest wrestler in GWM; Red Death Mask. The credits roll and now we transition to real life.

While this might be the dark match instead of the semi-main, it is in Ryogoku as Tiger Mask W takes on Red Death Mask at King of Pro-Wrestling. Having the cartoon spill into real life like this is incredibly cool. We weren’t sure what to expect when this match was first announced, but the lead in from the show gave this an added weight. Most people feared that this would be a showcase match for Tiger Mask IV, but instead we got an entirely new Tiger Mask that surpassed every expectation.

It’s no secret now that Tiger Mask W is really Kota Ibushi. The man turned down a WWE deal to come back to New Japan and wrestle as Tiger Mask in a dark match. I love him so much for it. I don’t know if he’ll stay in this role or not, but he was awesome here. Tiger Mask W put away Red Death Mask with a modified Tiger Driver and hit a German suplex perfectly like Naoto, but he also broke out some classic Ibushi offense. The crowd was into the match, but one of the biggest reactions came when Ibushi hit his trademark series of strikes, confirming his identity for most of the audience.

I’m not sure who Red Death Mask was under his (red death) mask, but he played his role very well. I don’t think anyone expected as strong of a match as we got here. The Tiger Mask W costume was an exact reproduction of the anime costume and it looked fantastic in real life. Ibushi looked great in the gear and even though he doesn’t normally work under a mask, he has the body language necessary to convey what he’s feeling to the audience.

If the two men involved hadn’t been playing their respective characters, I don’t think I would have enjoyed the match as much as I did, but that being said, there’s no such thing as a bad Kota Ibushi match. ***1/4

Tiger Mask W Episode 2 continued the strong quality that episode 1 brought us. While I’m enjoying that we’ve gotten a match in both episodes, I fear that the series will become formulaic if it continues to use this structure. The use of real New Japan stars in the cartoon is very fun and I’m looking forward to seeing what roles Tanahashi and Makabe play in the cartoon world New Japan power structure. The best thing about this episode was how the anime bled into the real world with the KOPW dark match and I really hope that they continue to do things like that with New Japan’s big shows. 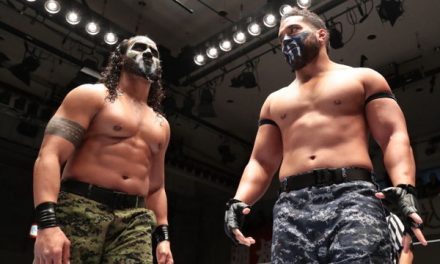