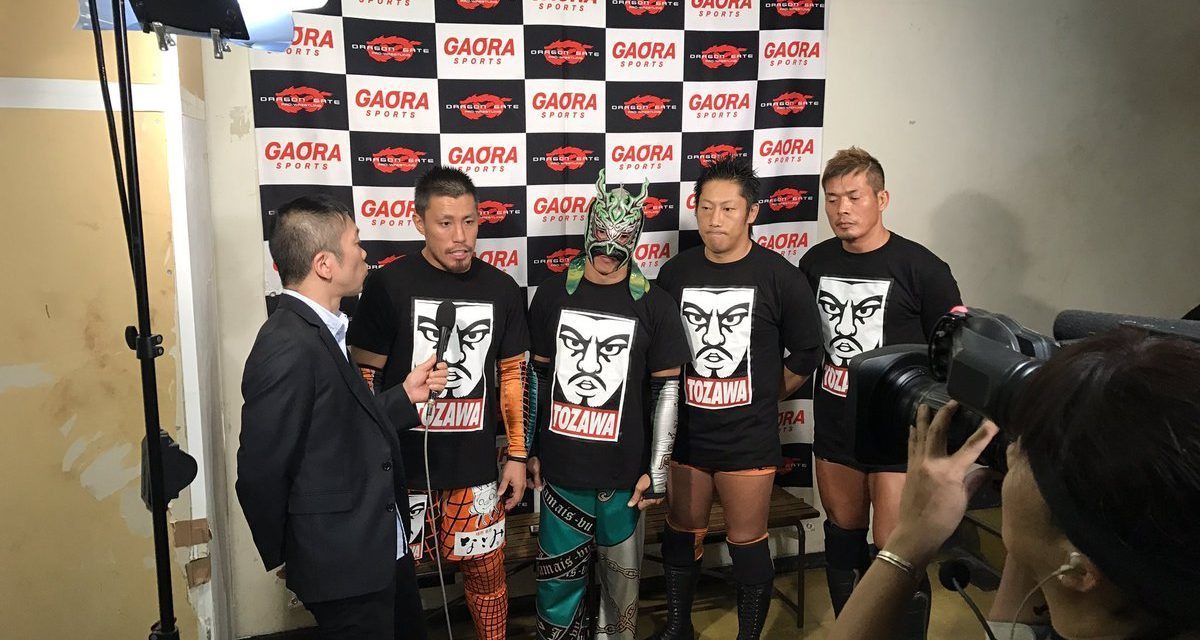 Boy, this Shun Watanabe is a handful. He jumped Don Fujii before the bell and paid the price for it throughout the match. For whatever reason, Watanabe has a bone to pick with Fujii and it’s only going to lead to a swollen, chopped up chest. Perhaps Fujii is spending too much time drunk and naked in the Sanctuary (which is an actual thing that happens) and Watanabe is sick of seeing old man junk. Maybe he’s jealous that Fujii is pulling in the housewife demographic. Whatever it is, Watanabe is in trouble for years and years to come. I should also note that Kaito Ishida has progressed much faster than Yamamura. I expect him to be ushered into the Brave Gate scene within the next year. Awesome stuff. A great battle of young and old to kick off this Korakuen show. Don’t skip out on these youngsters. ***1/2

Eita recovered from his disappointing Brave Gate title match with “brother” YASSHI at Dangerous Gate by nearly snapping the arm off of Maria in a well executed, sub-ten minute match. Eita is so slick on the mat. It doesn’t fit in with the modern Dragon Gate aesthetic, which makes it that much more special. Give him a time machine and let him work in the six-sided T2P ring with a young Yoshino, Shuji Kondo, and Milano Collection AT, please. He would fit right in with the llave-style that the T2P class was trained in.

Maria has to be in the discussion for being one of the best babyfaces in wrestling. Her boob-bump to set up a short-lived comeback on the current Brave Gate champion invoked the loudest reaction of the night from the Korakuen faithful up to that point. She is so great, and far and away the most improved wrestler of 2016. She is legitimately great this point. Short match, with Eita’s arm work paying off in the end as he submitted Dragon Gate’s queen with Numero Uno at just over the eight minute mark. Super fun. Another match worth watching. ***1/4

Tominaga stepped up to the plate for Over Generation back at Dangerous Gate after Lindman threw a tantrum. For those not totally up to date with Dragon Gate, El Lindaman, a barely legal adult, is struggling after his first breakup. He turned his back on Yosuke Santa Maria, destroying one of the best couples in wrestling history, although it was so short-lived.

Tominaga got in more offense than I would have liked against Linda, but the dominant submission victory for the now-rogue judo expert let the world know that he, broken heart and all, was not to be messed with. This was a fine exhibition and perhaps the best Tominaga has looked all year. It’s a shame, really. It’s clear that this promotion does not see value in Tominaga and routinely look for ways to humiliate him. He’s elevated past young boy status and he’s still the weakest member of the roster in terms of skill.

After the match, VerserK came out and shaved Tominaga’s head. I would not leave a positive Yelp! review for Barber Takagi & Friends. They destroyed Tominaga’s scalp, leaving him with spurts of blood on his head. Seeing him there was legitimately sad. I felt upset looking at him. Rarely has wrestling ever made me upset, but now more than ever, I want to see Punch Tominaga kick some ass. It won’t happen. He will always be a dork. One man can hope, however. ***

This was a thing of beauty. This worked simply because it was Dragon Gate and Korakuen Hall. If it was in Osaka in the small Bodymaker, this wouldn’t work. If this was in Kobe Sambo Hall, no way. Kyoto KBS Hall? Forget about it. This was Dragon Gate in Korakuen, and they worked it perfectly. The crowd was so hot for this. The dueling “H-A-G-E // CIMA” chants were fantastic. They worked at a beautifully quick pace throughout the match and this was four pros doing their absolute best. I can’t say anything else other than this was Dragon Gate in Korakuen Hall and it was beautiful.

Horiguchi nailed CIMA with a Beach Break at one point and appeared to knock him loopy. The Beach Break is an awesome looking move, but I say that as someone who will never have to take it. I don’t envy CIMA in this scenario. CIMA would recover and end up pinning Horiguchi with the Crossfire, which is another awesome move. Two thumbs up. This was fun professional wrestling. ***3/4

Something about this fell flat for me, and I have a feeling that until his official farewell, these Team Tozawa tags are going to follow that trend. This felt like a greatest hits collection of sorts with sprinkled in Tozawa comedy. It was fun, no doubt about it. Anytime Flamita gets to mix it up with Tozawa, I’m on board. That being said, I enjoyed what Osaka 06 and The Jimmyz tandem did much more in the prior match. This was fine for what it was, but when you think about all of the great multi-mans that Dragon Gate has done this year alone, this one already starts to feel forgettable. ***1/2

This was originally a trios match between Doi/Takagi/T-Hawk and Yoshino/Kaasa/Shimizu, but YASSHI ran out and attacked Monster Express minutes into the match. VerserK was prepared to pack up and leave, accepting the DQ finish, but Shachihoko BOY challenged them to an eight-man match. BOY’s feud with Shingo this year has been so, so awesome. He is the lowest member on the roster, the man with no voice, a GEEK~, and he continues to step up to the plate and challenge the baddest bully in wrestling.

This was another amazing performance from the Dragon Gate crew to cap off a Korakuen show this year. Time after time, these guys deliver. There’s nothing else like it. The main story here was T-Hawk squaring off against his former Monster Express friends. I liked T-Hawk as a babyface in MX, but it’s painfully clear that he should be a heel for the rest of his career. He is so good at being a prick. He toyed with Yoshino throughout the match, at one point lightly slapping his face, and it was the worst! Oh, I couldn’t wait to see Yoshino get his revenge.

The other note to make is that Shachihoko BOY ate the pin and VerserK, in general, was not in the mood for his miracle boy, ultra-underdog crap on this night. He didn’t even have ring gear. He wrestled in shorts and his mask. He must have looked like such a joke to Takagi and T-Hawk. T-Hawk planted BOY with the Night Ride to put him away for the three. ****1/4

“T-Hawk put down ME after the match was over. They couldn’t possibly expect to compete with Verserk. Their concept is smiling and happiness? The wrestling ring is no place for those types of things. They fucking suck and they should disband. Tozawa pushed him off. T-Hawk should look at his own unit. Half their members aren’t even good enough to be at the show. They should be the ones to disband. Takagi said that with T-Hawk as a member, they have powered up. Without T-Hawk and Tozawa leaving, ME was just trash and idiots. Since he was too stupid to realize, he informed Shimizu was the idiot. After more arguing, they agreed to a 5 on 5 match at the October Korakuen. The losing unit will disband. T-Hawk promised Monster Express would end at the hands of the new & improved Verserk.” –iheartdg.com

One of the most well-rounded shows Dragon Gate has produced this year. There was nothing bad on this show, and the Osaka 06 vs. Jimmyz match to close out the first half was a wonderful surprise. Next month’s Korakuen is set up beautifully now with Eita vs. El Lindaman in a Brave Gate contra Cape Match and a Losing Unit Disbands match between Monster Express and VerserK. Dragon Gate’s Summer Adventure Tag League was lame, but they are right back on track after this hot Korakuen show. Two thumbs up.