In the shiny blue sea of Japanese independents, one can easily find themselves overwhelmed.

Like colorful pinwheels spinning and determined to attract your attention, sometimes the best approach to indie promotion and the boatloads of wrestlers is quality over quantity. K-DOJO is one of those quality promotions quietly and consistently producing a down-to-earth wrestling product. Emphasizing substance with a dash of flash, the Taka Michinoku-owned company isn’t going to blow you away with stacked cards and Adderall-laced action but if you like easy-to-digest submission and mat wrestling, K-DOJO can help fill that void in your life.

While company vets like Michinoku and Hiro Tonai are some of the promotion’s best mat-based guys, 27-year-old Ayumu Honda has quickly become one of my favorites to watch in a K-DOJO ring.

One look at the kid, with his green streaked hair and cute little smirk, and it isn’t obvious that he can competently work the canvas. But he can, and he does, with a solid sense of presence and command.

Although Honda hasn’t had his match yet, his sub-10 minute “trial matches” with some of the more experienced workers over the last year and half have been well-worth going out of your way to see. He’s primarily been relegated to K-DOJO since his debut in 2012, with only a handful of appearances in outside promotions like WRESTLE-1, NOAH, and DDT. Personally, I feel like he would have been a refreshing addition to this year’s Super J Cup in New Japan over the more junior generic Kaji Tomato. Nevertheless, here are five hand-picked matches to give you a better sense of what Ayumu Honda brings to the table.

For technically sound matwork and smooth-as-catshit reversals, this is your jam. A perfect example of what happens when you don’t try to overcomplicate things but execute and sell the little things well. There’s a great sense of struggle when it comes to Honda’s performance. You can see it in his focused movements that he really wants to get the better of the smug veteran. And when he does manage to force TAKA into a precarious situation, the worried look on TAKA’s face or the way he flails around for the ropes to escape a hold speak volumes. Honda’s a threat and he treats him as such, eventually using his experience to pick up the submission victory.

A different animal than the ground game played against TAKA. Here, Honda plays the scrappy underdog role so well, selling beautifully for Sato’s heelish approach The way his head hangs on the rope, for example, or how he slumps in a corner. Simple things done right. Sato is a dick from the get go, tossing poor Honda into a row of chairs and then just throwing the chairs at him. He slaps on an awesome Sharpshooter, grinding his boot into Honda’s head before putting all of his weight down. There’s also a fun duck-and-slap sequence with a satisfying payback spot, and a downright nasty whiplash counter by Sato. Really entertaining match.

This is a shortie but goodie as Honda once again shows off that strong in-ring intuition against Tamura, who controls this thing from the start. He goes from working the front neck chancery to switching his focus to Honda’s arm. Honda’s able to finagle his way out of a few predicaments but after Tamura blasts him with a big kick, Tamura wrenches in a sweet Fujiwara armbar for the submission. Another KISS-style match – keep it simple, stupid.

The best Honda performance of 2016, hands down. Sato’s goal is straight-forward enough: destroy Honda’s leg. He gives Honda the courtesy of a little mat wrestling before he decides its striking time. Clearly, Honda is more comfortable on the ground so he tries to find an opening to take Sato down. But even when he finally takes Sato back to the mat and gains control of the arm, Sato is able to smartly trap the leg. Awesome selling from Honda in this with a final epic struggle that’s worth the price of admission alone.

This is probably the weakest match of the bunch but it’s not really on Honda. In fact, Honda outwrestles Aoki throughout much of this thing, to a point where Aoki realizes he can’t beat Honda on the ground so he keeps going for sleepers or backdrops. Atsushi Aoki is one of those guys that I want to like more than I actually do. He’s got all the right tools in the box, but for some reason, he never quite utilizes them in a way that makes sense…to me, at least. Honda delivers a beautiful hip throw and he exhibits good arm control over Aoki, making him visit the ropes a couple of times. In the end, however, Aoki is able to reverse Honda’s armbar and quickly submit him with one of his own.

Ayumu Honda may not look it but he’s one hell of a ring technician and a testament to what TAKA Michinoku and company are doing right down at the K-DOJO. I would love to see him venture outside of his familiar stomping grounds to work some more dates with companies like All Japan or DDT, to help freshen up some of the stale junior heavyweight scenes. He’s a shining example of how to make the simple things in pro wrestling fun and effective. 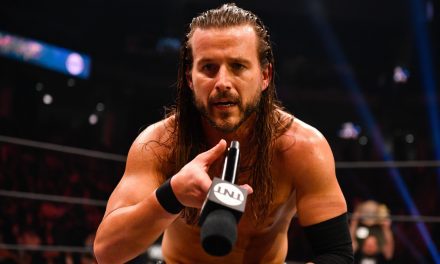